Mercury in retrograde? Music Week crunches the numbers for this year's Prize shortlist 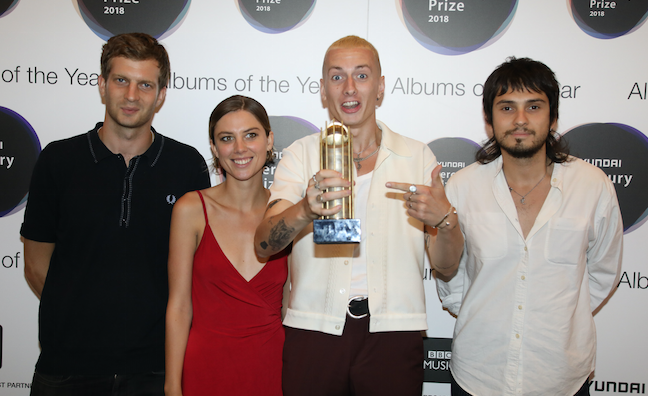 Two weeks after Wolf Alice’s Visions Of A Life (Dirty Hit) was the surprise winner of the Hyundai Mercury Prize, and one week after the album surged back into the Top 20 on the back of renewed interest after that win, it dropped out of the Top 75 on Friday.

Visions Of A Life fell from No.15 to No.76, with sales down 71.3%, despite Dirty Hit reactivating its marketing around the album after the win.

The rest of the 2018 shortlist fared little better, with only two of the 12 nominees remaining in the Top 75 (and only then by the skin of their teeth). Arctic Monkeys' Tranquility Base Hotel & Casino (Domino) dropped 45-72 with sales down 25.3%, while Florence + The Machine’s High As Hope descended 48-70 after an 18% drop.

Indeed, there are more Mercury nominees from previous years in the Top 75 than from the current list, with Ed Sheeran’s ÷ (Asylum/Atlantic, No.12), Arctic Monkeys AM (Domino, No.43), Oasis’ (What’s The Story) Morning Glory (Creation, No.58), Arctic Monkeys’ What People Say I Am, That’s What I’m Not (Domino, No.59) and Amy Winehouse’s Back To Black (Island, No.69) all ranking higher than any of the committee’s 2018 choices.

Opponents of the Prize may well seize upon these stats as proof that the Mercury no longer has the impact that it used to. Indeed, Music Week research has already shown that a nomination has a minimal sales impact, although it does seem to help boost social media reach.

But is there another way of looking at it? Increasingly, record labels are less focused on sales across a single album, but more on stats across an artist’s entire activity, with new music a way to boost total consumption. Plus, of course, the way that the public tries out an album has completely changed since the Mercury was in its pomp. Few will risk £10 on an instant download or CD purchase, but Music Week research showed that all of the nominees increased the proportion of ‘sales’ for their shortlisted albums that came from streams.

And examining monthly Spotify listeners – the streaming service was this year’s Mercury Prize digital partner – shows that a Mercury shout can still help enormously, especially for the smaller artists on the list.

Take Sons Of Kemet, for example. Their Your Queen Is A Reptile (Impulse) effort might have been the ‘token jazz’ entry with no chance of winning, but their monthly Spotify listeners have shot up from 78,596 on the day the list was announced to 131,084. That’s a huge increase of 66.8%, or an extra 52,488 people that sampled their music at least once, and that the band can now potentially monetise in all sorts of different ways.

A Mercury shout can still help enormously, especially for the smaller artists on the list

All the above, of course, are starting from low bases. But the winners also saw a significant uplift, Wolf Alice moving from 885,812 monthly listeners to above the magic million at 1,070,636. That’s an increase of 20.87% and, if they all stick with the band on streaming and check out the entire catalogue, that’s potentially a lot more incremental income than they’d see from a brief burst in sales.

The picture is not so clear cut for some of the bigger acts on the line-up. Noel Gallagher’s High Flying Birds actually saw a 0.9% decline in the number of monthly listeners, while Lily Allen – who has complained about how her No Shame (Parlophone) album has been promoted – dropped 4.11%. Meanwhile Jorja Smith and Florence + The Machine declined 16.56% and 17.86% respectively, although their numbers were likely to be at a highpoint when the shortlist was announced, as their records had only just been released.

Arctic Monkeys were on tour during the survey period, which may have boosted their numbers more than the Mercury but, with most of the other acts, it seems likely that the rise was indeed linked to their higher profile around the Prize.

The days of a Mercury win guaranteeing instant big sales may be gone. But, as BPI chief executive Geoff Taylor says: “It’s not really just the week after we look at, it’s over a longer period. We really hope that Mercury win is going to accompany Wolf Alice and help them push through, not just in the UK, but more broadly.”

The fabled ‘Mercury effect’ may only be a short-term one these days. But on streaming, it looks like it will linger a little longer…