Official Airplay Analysis: Elvis sees sales increase by 12.1% to stay atop on albums 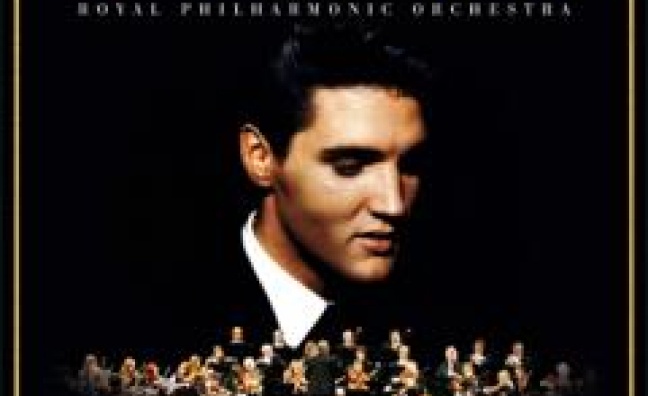 ALBUMS
In a year when only Mumford & Sons, Muse and Years & Years have previously managed to spend two consecutive weeks at number one - and then only on descending sales - Elvis Presley & The Royal Philharmonic Orchestra's If I Can Dream does so in style, increasing sales 12.10% week-on-week to 88,603 (including 687 streams). That's the second highest weekly sale of the year for an artist album, marginally behind the 89,110 copies that Noel Gallagher's High Flying Birds' album Chasing Yesterday sold on debut in March. In terms of pure, paid-for sales, Presley actually has the year's highest tally, with his 87,916 shading Gallagher's 87,371.  If I Can Dream's stayover ends a run of 15 straight weeks in which leadership of the chart changed, and it is joined in the Top 75 by Presley's 2002 chart topper Elv1s: 30 Number One Hits, which jumps 79-37 (2,682 sales), making the Top 40 for the first time since 2005. It has sold 1,809,881 copies.

If I Can Dream's resilience proved too much for Little Mix, who would otherwise have landed their first number one album with Get Weird. Debuting at number two, Get Weird nevertheless racked up the highest first week sales yet (60,053) for the X Factor graduates, helped by the popularity of current single Love Me Like You, which jumps 19-13 (30,870 sales) to a new high, . Their first album DNA sold 53,314 copies when debuting and peaking at number three in 2012, and follow-up Salute sold 35,281 copies when debuting and peaking at number four the following year. DNA has gone on to sell 373,785 copies, with Salute selling 295,528 copies.

Like Little Mix, Ellie Goulding delivered her third album last week, and like them she appeared on The X factor to give it a boost. She came into the week with a far superior record, with both of her previous albums reaching number one, and selling considerably more copies than Little Mix, but she trails in behind them at number three with Delirium. To be fair, however, the 38,429 copies it sold last week represent the best first week sale of her career, surpassing the 36,844 copies that Lights sold when debuting a number one in 2010, and the 33,425 copies that follow-up Halcyon sold when entering at number two in 2012. Halcyon holds the record for best one week sale for a Goulding album, shifting 64,208 copies in the week before Christmas in 2013, and reaching the summit (for the first of three times) on its 65th chart appearance a fortnight later on sales of 37,507. Including the subsequent Halcyon Days edition, it has sold 1,096,509 copies, while Lights has sold 801,414 copies, including its Bright Lights edition.

His previous interest in a singing career sidelined by his success as a comedian, presenter and actor, Alexander Armstrong makes a strong showing with first album, A Year Of Songs.  The 45 year old Pointless TV host unleashes his baritone on a collection of covers that include In The Bleak Midwinter, Danny Boy and Summertime on the album, which debuts at number six (19,395 sales).

American singer/songwriter Anastacia is barely known in her homeland, where she has had only one Top 100 album (Freak Of Nature, number 27, 2001) and one Hot 100 single, I'm Outta Love, which rose to the not so dizzy heights of number 92 in 2000. In Britain, she has had 14 hit singles and six Top 20 albums, the latest of which, Ultimate Collection, debuts at number 10 (10,515 sales). Her second hits collection - Pieces Of A Dream debuted and peaked at number six exactly 10 years ago - it excludes some hits she is not keen on, and includes two new recordings.

Number one for nine straight weeks after its release in 2000, The Beatles' 1 album returns to the Top 10 for the first time since it charged to number six in September 2011, when released in new remasters. Its latest surge - to number six on sales of 26,840 copies - is due primarily to the release of 1+ editions, which supplement the audio recordings of the track with newly remastered and upgraded visuals via CD and blu ray. 1 has sold a massive 3,121,028 copies since release, making it the fifth biggest seller of the 21st century.

Sam Smith's In The Lonely Hour jumps 10-7 with sales up 83.11% week-on-week at 16,381 following the release of the new Drowning Shadows edition. Including streams, it brings up the album's two millionth sale. The 41st album to reach that tally in the 21st century, its current tally of 2,009,468 sales includes 1,913,187 paid-for sales, with the remainder from streams.

Seal's numbering system seems to have gone awry, as his ninth studio album is entitled 7. Actually, it signifies that it his seventh album of self-penned songs (Soul and Soul 2 comprised entirely of covers), and brings the 52 year old his seventh Top 20 album, debuting at number 13 (9,146 sales). It is his first album since Soul 2 debuted at number 24 (17,687 sales) four years ago next week, peaking nine weeks later at number 17.

The only album in the Top 75 without a physical edition this week is Art Angels, which debuts at number 31 (2,964 sales, 2,120 from downloads and 844 from streams) for Grimes. Despite her name, the 27 year old Canadian's eclectic musical palette doesn't extend to grime music. Of her three previous albums, only the most recent - 2012's Visions - made the Top 75, peaking at number 67.

Released exactly five years after his breakthrough solo album The Lady Killer was a huge success, Cee Lo Green's first regular studio album since that time - Heart Blanche - debuts at number 43 (2,448 sales). Home to Music To My Soul, which debuts at number 59 (8,447 sales) on the singles chart simultaneously, Heart Blanche has a lot of catching up to do. The Lady Killer debuted at number 10 on sales of 22,208 copies, peaked nine weeks later at number three, spent 67 weeks in the Top 75 and has thus far sold 756,710 copies.

Classically trained Mancunian musician Sam Shepherd writes and performs electronic music as Floating Points. His latest album in that guise is Elaenia - it's a Mexican bird - which brings him his chart debut, entering at number 46 (2,387 sales). It opens at number two on the vinyl albums chart with 807 sales. Elvis Presley's If I Can Dream is number one with 1,120 sales.

ZZ Top guitarist Billy Gibbons makes his chart debut outside of the group with Perfectamundo (number 62, 1,707 sales). The 65 year old is accompanied on the album by The BFG's.

SINGLES
Adele and Justin Bieber's duopoly of the singles chart continues, with the former's Hello at number one and the latter's Sorry at number two for the third straight week.

Eleven months after finishing runner-up to Ben Haenow in the 11th season of The X Factor, Fleur East debuts at number three with her first single Sax (60,551 sales). Although that's significantly fewer than the 214,239 copies that Haenow's coronation single Something I Need sold on debut last December, it surpasses the 21,059 copies that Haenow's second single -  the Kelly Clarkson duet Second Hand Heart - sold when it opened at number 21 last month. Falling 22-29 (18,019 sales) this week, it doesn't look like improving on that number 21 posting.

Half The World Away is 19 year old Norwegian singer Aurora's cover of a Oasis b-side from 1994. Debuting at number 11 (33,019 sales), it is the audio soundtrack to the  new John Lewis Christmas advertisement. It brings to nine the number of hits from John Lewis TV commercials. Last year, Tom Odell's cover of The Beatles' Real Love reached number seven. The two John Lewis Christmas campaign songs immediately prior to that both reached number one - Lily Allen in 2013 with her cover of Keane's Somewhere Only We Know, and Gabrielle Aplin in 2012 with Frankie Goes To Hollywood cover The Power Of Love.  Before that, Paloma Faith reached number 16 in 2012 with her cover of INXS' 1988 number 24 hit Never Year Us Apart; under the guise of Slow Moving Millie, singer/actress Amelia Warner's cover of The Smiths' Please, Please, Please Let Me Get What I Want reached number 31 in 2011; Ellie Goulding reached number two in November 2010 with her cover of Elton John’s Your Song; Taken By Trees’ cover version of Guns N’ Roses’ Sweet Child O’ Mine  - used for the Christmas 2009 campaign - reached number 23; and Guillemots singer Fyfe Dangerfield’s rendition of Billy Joel’s She’s Always A Woman To Me reached number seven in May 2010. All are covers and - this is a personal opinion - all sucked the life out of the originals. Oasis' own recording of Half The World Away also takes flight this week, giving them a belated 27th hit as it debuts at number 56 (8,944 sales).

The introductory single from their upcoming album A Head Full Of Dreams, Adventure Of A Lifetime is also Coldplay's 24th Top 75 hit but not yet their 16th Top 10 hit, debuting at number 14 (30,492 sales).

Around for nearly a year, and previously available to download for free from 99 Souls' Soundcloud page, their cover/mash-up The Girl Is Mine debuts at number 44 (12,125 sales). It contains a re-recorded vocal by Brandy - who partnered Monica to number two with the original The Boy Is Mine in 1998 - and a sample from Beyonce's vocal on Destiny's Child's 2005 hit Girl, thus its final artist credit of 99 Souls feat. Destiny's Child & Brandy.