Ricky Gervais: 'I'm not having an identity crisis - I'm not a pop star' 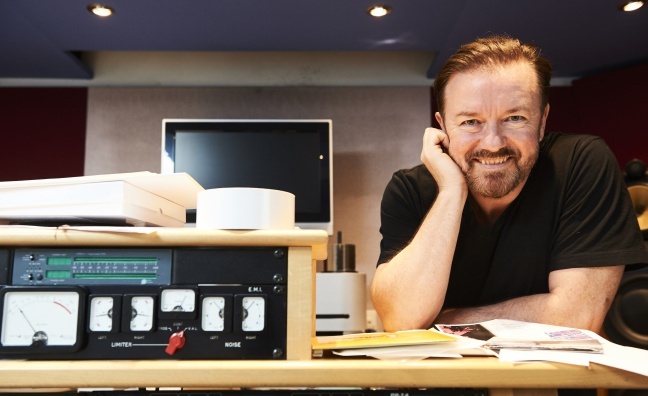 With David Brent: Life On The Road set to hit cinemas this Friday, Ricky Gervais caught up with Music Week to tell us about his brief stint in the music industry and that he is not going through an “identity crisis”.

The film, which follows Brent as he embarks on a self-funded tour with his band Foregone Conclusion while working a day job as a travelling tampon salesman, comes with an accompanying album of tracks penned by Gervais.

And, though he jokes about living out his pop-star dreams through Brent, Gervais insists that he doesn’t want the album to be seen as a Ricky Gervais “vanity project” and that it is being released “purely to enhance the realism of a fictional character in the real world”.

“It’s a fake documentary - it’s still all about the film and the concept that lives within The Office and now in Life On The Road,” he said. “I am not having an identity crisis; I don’t think I’m a pop star.”

Although the album is supposed to have been made by a fictional character and Gervais has conceded that he won’t ever be a pop star, he emphasises how much he’s enjoyed the process of creating music for an official release and adds that he’s is looking forward to playing the vinyl on his turntable at home.

“I am still creating something, but I am creating it as David Brent. I know it sounds like I am paranoid and like I’ve got a chip on my shoulder, but I really want people to know that this is an album I have created as David Brent, and that it is part of that fiction.”

Gervais did enjoy a short stay in the music industry early on in his career, although he is quick to play down suggestions that he ever achieved star status.

"I didn’t get into music,” he said. “I got through the door and then was asked to leave almost immediately!”

Long before he created and starred as Brent in The Office, Gervais had a brief stint as an up-and-coming pop star with new wave duo Seona Dancing, which he joined in the ‘80s while at UCL. The group signed to London Records but failed to break the Top 40 in the UK.