'The sky's the limit with this band': Rough Trade's Ruth Patterson on the return of The Decemberists 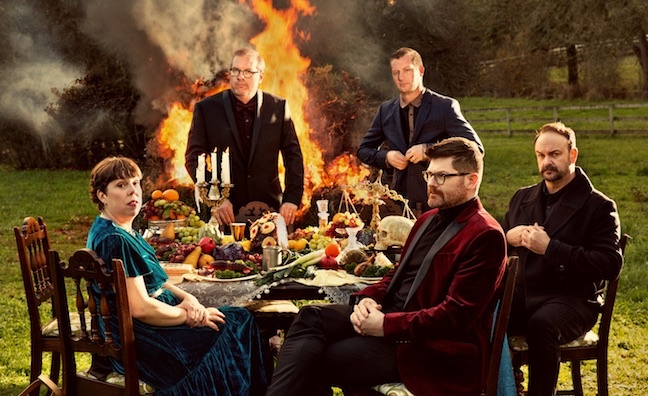 The Decemberists will be hoping for a Top 10 finish for their eighth album, I'll Be Your Girl, which dropped today (March 16). The indie-folk band from Portland have made steady progress on the UK album charts over the last decade: No. 50 for 2009’s The Hazards Of Love, No.24 for 2011’s The King Is Dead and No.13 for 2015’s What A Terrible World, What A Beautiful World.

The band have been signed to Rough Trade for UK releases for more than a decade. Here, GM Ruth Patterson talks Music Week through the campaign and the label’s ambition’s for The Decemberists…

The Decemberists have made steady chart progress in the last decade - what are your expectations for this album?

We have high hopes. We’ve got lots of special products, including a limited edition “exploded” edition, with the entire album pressed on different brightly coloured 7”s in a pop up box set. The online marketing campaign has been really special, and fun, with a great visual identity provided by Carson Ellis who did the album’s multi-coloured, vibrant artwork again, which is running right through the campaign. The Decemberists have an ardent, fanatical fanbase, who engage consistently on pre-order and week of release, and there has been massive anticipation of their UK dates which have just been confirmed for this November. We’re going all out, we’ve got HMV window displays, loads of in-store displays with the indies and a global Spotify Marquee promotion. There are different coloured vinyl albums for different territories too, with a white vinyl edition for the UK and Europe. We also did a very successful album and gig ticket pre-order incentive with fans.

The single Once In My Life features a more electronic sound - do you think this album can reach a wider audience?

Yes, they’ve broadened their sonic range, so I’d like to think so. I think in many ways I’ll Be Your Girl is their most ambitious album to date. The album reflects a group at the height of their creative powers. They wanted to get out of their comfort zone and worked with producer John Congleton (Lana Del Ray/St Vincent) embracing influences from a broad spectrum ranging from New Order, Roxy Music and glam rock, whilst maintaining their own characteristic elements.

Is that track getting a lot of radio support?

Yes, it’s been getting early support from Lauren Laverne at BBC 6 Music amongst others. This week we’re highlighting the epic Once In My Life and later in the year we’ll be highlighting the glam stomper We All Die Young.

They have a strong live reputation - how important will the UK tour in November be to the later part of the campaign?

Massively. A Decemberists gig is always a momentous night out and a unique experience, with comedic banter, audience participation, whales [on The Mariner's Revenge Song], unexpected cover versions and general euphoria all round. They tend to be hugely celebratory live shows. They have a strong regional following too.

They are curating their own US festival for the second year running - are there any plans to bring the festival to Europe?

We would love them to bring the festival here. The Decemberists are a musicians’ band, and they themselves are all huge music heads, vinyl collectors and enthusiasts so it’s logical that they want to showcase other artists’ talent as curators. Their support acts have always been inspired choices, chosen by the band themselves over the years too.

Eight albums in, how important have The Decemberists become as a band - and can they can cross over and have a mainstream audience?

The Decemberists have become a really important group under their own terms, which isn’t easy to do. They will always go one stage further unfurling their tentacles, constantly reinventing themselves. For example, they wrote Ben Franklin’s Song for Lin-Manuel Miranda’s Hamildrops - bonus material from the hit musical Hamilton. They have appeared in an episode of The Simpsons, released a Grammy-nominated collaboration with Olivia Chaney under the name Offa Rex and received a Grammy nomination themselves for Best Rock Song [Down By The Water]. Let’s not forget they have also had a No.1 album in the US too [2001’s The King Is Dead]. So we’d like to think the sky’s the limit with this band.