"You'd be surprised how many times the local constabulary pulls us over": Kermit The Frog - The Music Week Interview 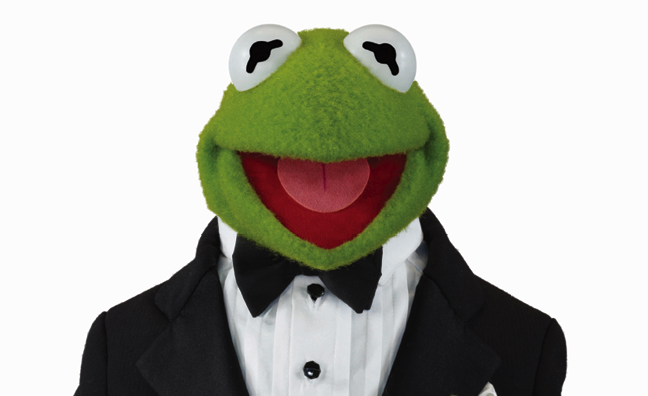 It’s not every day Music Week interviews a frog. But then again, this isn’t just any old pond-dweller we’re talking about here. Between Oscar glory, a Hollywood Walk Of Fame star and collaborating with some of the biggest musicians in the world – including Sir Elton John, Prince and Lady Gaga – Kermit The Frog is officially the most successful tailless amphibian ever. Today and tomorrow (July 13-14), he is in London for The Muppets Take The O2 event.

Not only is it billed as their most “sensational, inspirational, celebrational, muppetational, full-length live show” yet, it’s actually the first time they've brought it to Europe. As if that wasn’t enough, their Takeover will also see appearances from Kylie Minogue, David Tennant, Charles Dance, Kevin Bishop, Peter Davison, Adam Hills and Steps. Here, Kermit takes time out of his busy schedule to reflect on his life and times in music...

What’s the key to putting on a great live show?
“Showing up. If you’re actually there, it’s always a much better live show. Also, it helps to have a variety of acts, like we’ll have at The Muppet Take The O2. We’ve got music, dancing penguins, singing chickens, classic sketches like Muppet Labs and Pigs In Space and, of course, Miss Piggy. Put all those things together, and throw in complete and total chaos, and you’ve got a once-in-a-lifetime great live show. I hope.”

And how did you actually manage to get The Muppets back together?
“It’s not very difficult. We’re actually always together. Oh sure, we go off to do our own solo projects and gigs, but when it comes to living, we prefer to get the group rate.”

Is life on the road with The Muppets as rock’n’roll as it used to be?
“We usually travel in the Electric Mayhem bus with Dr Teeth driving and Animal acting as the siren. You’d be surprised how many times the local constabulary pulls us over just to see if we’re for real. It doesn’t get much more rock‘n’roll.”

Be honest: who is the greatest music star you’ve ever worked with?
“Wow, I really have to be careful answering this question. We’ve worked with everyone from Elton John and Lady Gaga to Prince and Johnny Cash. But if I had to choose the one music star who is the greatest, I’d have to say Miss Piggy. It may not be an honest answer, but it’s a safe one.”

And who is the most difficult music star you’ve ever worked with?
“Same as above. Only this time my answer is not safe, but honest.”

We’ve worked with everyone from Elton John and Lady Gaga to Prince and Johnny Cash. But if I had to choose the one music star who is the greatest, I’d have to say Miss Piggy...

What’s the biggest change you’ve seen in the music business?
“The independence of artists. Back in the day, you had to be signed by a big label and have star-makers behind you, but today, if you’ve got a song in your heart and a banjo – or Stratocaster – on your knee, you can make music and find an audience. I think that’s great. By the way, I tried playing a Stratocaster, but electricity and swamps; not a good mix...”

Can you tell us the best advice you’ve ever received?
“Never plug in a Stratocaster while sitting in a swamp.”

What’s the secret to The Muppets’ enduring success?
“It helps that we’re willing to endure each other and the audience is willing to endure us. But I think the real secret is that people want to laugh. They want to be inspired by singing frog, impressed by a diva pig and heckled by a couple of old guys up in the balcony. But mostly they want to believe that in a world where nothing seems to make sense, there’s still a place for utter nonsense like ours.”

In your own personal experience, what’s different about success the second time around?
“You get lost less often. GPS helps, too.”

You’ve had some huge hit singles in your career. How does modern pop music compare to your classics?
“I love modern music. I’m a big fan of Stormzy and Adele. To me, great music is great music. If it touches your heart or makes you want to get up and get down, then it works for me”

Finally over the years, you’ve had your critics, most notably Statler and Waldorf. How do you cope with criticism?
“If it’s constructive criticism, we take it and try to improve. But if it’s coming from Statler and Waldorf, we mostly just duck and cover.”