On The Radar: Gayle

Last month, Gayle hit No.1 in the UK with viral break-up anthem Abcdefu, and now has the world at her feet. Music Week meets the teenage star-in-the-making to talk pop, Nashville and more...

There’s a moment in a pop star’s career, between the steady build of life as an emerging artist and the huge blow up of worldwide fame, that has an almost magical quality. This is where Music Week finds Gayle.

The 17-year-old (full name Taylor Gayle Rutherford) is in New York, in January’s biting cold. A few days ago, she made her TV debut with a performance on Jimmy Fallon’s US talk show, which regularly commands upwards of a million viewers, and her diary is full of songwriting sessions. Right now though, the focus is on one song in particular, that she wrote around a year ago at home in Nashville.

Abcdefu, fuelled on snarling guitars and vitriol towards an ex, is everywhere. Days after we speak, it will topple Adele’s Easy On Me at the top of the UK singles chart, reaching the peak 21 weeks after its original release. In that time it went viral on TikTok, spreading around the world. At the time of writing, it has almost 300,000 UK sales, is racing towards 300 million Spotify plays, has more than 60m YouTube views and is top of the UK airplay chart.

So, Gayle, what does it feel like to be everywhere?

“I honestly don’t have that feeling,” she answers. “The song is playing in places that I’ve never been to before, and I’m very happy with what’s happening, but I don’t have this mentality of being huge. When I look at the streams and I see the numbers it’s like, ‘Wow, that is a lot of people!’ but it’s hard to actually comprehend it and see that many people, you know?”

Gayle’s point is refreshing: numbers are an understandable focus, but it can be hard to discern tangible meaning behind them. Nonetheless, there is the unmistakable, snowballing force of a big hit behind Abcdefu. Heavy with sarcastic humour, its lyrics show off Gayle’s close-to-the-bone style: direct, heavy-hitting pop music, played over punchy riffs. ‘Fuck you and your friends that I’ll never see again,’ goes the pay-off in the chorus. ‘Everybody but your dog, you can all fuck off’.

“There’s definitely sarcasm in a lot of the things I say, I’m a very naturally sarcastic person and that bleeds into my songwriting,” she smiles. “It’s not something I purposely try and do, I’m not trying to show off my personality specifically, I just do what I do and see what happens.”

Gayle has been on this path since she can remember. Growing up in the suburbs of Dallas, Texas, she was first drawn to music when jazz singers popped up in her lessons at primary school. Suddenly, aged seven, she was exploring the work of Ella Fitzgerald, which led her to Aretha Franklin. Gayle was obsessed with music, so much so that the family upped sticks to Nashville when she was 10 so she could follow her dreams.

“I did writers’ rounds, which is basically three to four people going on stage and singing one after the other,” she explains. “At first, you’re on stage with complete strangers, but then when you grow more and get to know more people, all of a sudden you’re not up there with strangers, these people are your friends. Then, when you’re there even longer, your friends become like family and you start singing songs together and you’re on stage with people you’ve written the songs with.” 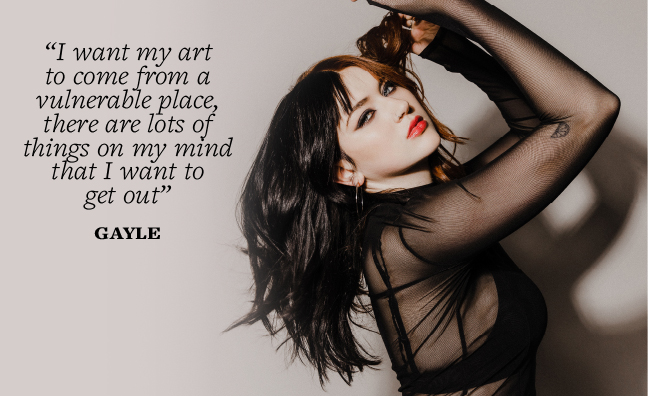 From the age of 10, Gayle would be singing in bars three, four or five nights a week, as her mum ferried her around the city with her guitar. The pandemic, which hit when she was 15, brought an abrupt end to that routine, but by then Gayle had already met songwriter, producer, label exec and former American Idol judge Kara DioGuardi, who became a mentor after hearing Gayle sing at a pop writing event. After releasing singles Dumbass, Z, Happy For You and Orange Peel independently, Gayle signed to Atlantic in May 2020.

“Doing the rounds in Nashville was an amazing opportunity to see live music, learn how to perform and just meet people,” she says. “Obviously there was a bunch of people who didn’t want to write with the 10, 11, 12 or 13-year-old, but I eventually found people that were willing to. It was such an amazing experience and I owe a lot of my growth as an artist and a songwriter [to doing it]. I’m not saying I’m a great artist or anything, but I definitely learned a lot!”

Gayle’s biggest and most important lesson so far has been to embrace the vulnerability that drives her singular writing style, leading to instant, indelible lines like the ones in Abcdefu.

“It’s very hard to be vulnerable, especially with other people, sometimes complete strangers,” she says. “It took me a really long time to get comfortable with that. I wrote Abc… when I was 16. [Before] I definitely would not talk about my own personal experiences in my songs, it used to be more of a storytelling thing for me. Then, when I really started getting serious about my artistry, I realised I wanted to come from this more vulnerable and personal space. Plus, I’ve got a lot of things on my mind that I want to get out.”

“It’s about somebody that I crossed the line on in a friendship,” she says. “It was one of those things where they kind of took advantage of our friendship to get in my pants, honestly. I didn’t even know what it was like to be mad at this person, so when it happened it took me a minute to realise I was angry. I knew this person broke my heart and made me sad, but I didn’t know that they had, like, pissed me off, because I’d always had such innocent and delightful feelings towards them. The song was me coming to terms with the fact I was angry, holding them accountable for their actions and just simply being pissed.”

The prospect of a whole album of Gayle venting her feelings is exciting and, amidst the buzz of her chart-topping single, her vision for it is taking shape. She mentions another new track that’s “about wanting to kill somebody, definitely not a love song” and says that honesty will form the core of all her future work.

“When I’m in the room writing a song, I think about my experience and why I’m writing the song, there has to be a point to it,” she concludes. “Once I feel I’ve got the point across, I think about what it might mean for other people, what effect it could have. I’ve found that if I write from my own experience or my truth, things that happen to me, then it’s going to resonate just because I’m being honest. That’s the main thing.”