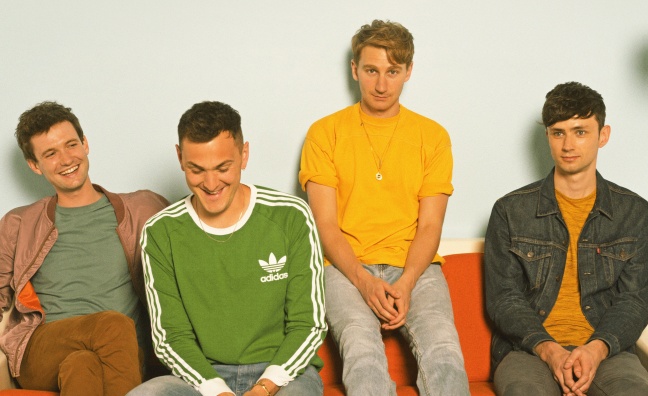 The unstoppable rise of Spotify and Apple Music has brought about a new phenomenon: the streaming band.

An artist who might not sell that many records, but who gets people logging in and listening, in their millions.
It’s worked for many a pop and urban superstar.

With a back catalogue of just two albums – 2014’s Zaba and How To Be A Human Being, released in August, they’ve amassed over 200 million Spotify streams, and boast nearly three million monthly listeners.

They’re the kind of stats that get record label execs using words like “bonkers”.

“They were discovered through streaming, the streaming services were massively supportive with the band very early doors, unlike commercial radio in this country, and because they’ve been helped in that world, they’ve just found this niche.

Saying the band have sold the equivalent of 600,000 albums round the world, and most of that is based on streaming, is pretty bonkers!”

There is, of course, one issue that comes along with being a streaming band: countries where stream numbers don’t count towards the album charts. Take Australia, for example, where Glass Animals happen to have a huge following.

“That was very frustrating for us,” says Anya Strafford, international marketing manager at Caroline, of the sophomore record, which charted at No. 11 down under.

“Looking at the amount of streams that we’d done, if streams were included in the album chart we’d have had a Top 3 record – but they’re not, unfortunately.”

So, how does a relatively unknown indie band from Oxford get a Top 3 album – albeit a hypothetical one – on the other side of the world?

Friends from the age of 12, they’d go back to their mums’ houses for Christmas, and hang out playing each other music they’d made.

A year and a half later, Bayley decided to abandon his medicine degree – and dreams of becoming a doctor – in order to focus on the band.

With his mum suitably “pissed off” he lied, and told her he was taking a year out, and got himself a job in a sausage factory.

In 2013, the band caught the attentions of Epworth, who signed them to Wolf Tone. Bayley quit the sausages immediately.

“I didn’t even hand my notice in, I just stopped going!” he chortles. “That’s the most rock star thing I’ve ever done, just didn’t go to work for a couple of weeks… They rang me up eventually and were like, We’re guessing you’ve left?, and I was like, Yep!”

Despite this lack of professional courtesy, Epworth knew he wanted to work with the band, as soon as their manager Amy Morgan went to his studio and played him some tracks.

“I thought they were astounding,” says Epworth. “They sounded like the name, strangely, because they’ve got this sort of crystalline quality to the music, and that was good enough for me.

I guess it’s if it’s good enough for me, it’s probably good enough for most people… I wanted to be involved somehow, and they didn’t need a producer, because Dave’s a very good producer himself.

They needed someone who could help them make a great record, so I held their hand through it.”

Having one of the world’s leading record producers wanting to work with them came as a shock to Glass Animals.

Epworth has, of course, worked with everyone from Adele to U2, and the band grew up listening to albums he’d made, such as Bloc Party’s Silent Alarm.

“He made a lot records in that era that were really cohesive and complete,” says Bayley. “Records that you listen to from start to finish, and they take you through all the emotions – and to be able to work with the guy who made records like that, was pretty awesome.”

Ask what Epworth brought to the band’s two studio albums, aside from the obvious experience, and Bayley will say he instilled a confidence in the band, teaching them to trust their gut instinct, but question everything they do at the same time.

“It’s definitely confusing, but very helpful,” says Bayley. “He often asks why you’re doing something, and you end up justifying it to yourself. It’s a very important thing that we never really did.”

When it came to making the “difficult” second album, the pair say they did nothing out-of-the-ordinary, and put its success down to it happening quickly.

“We chose to keep it short, sweet and to the point,” says Epworth. “We thought carefully about how we structured the arrangement of the record and just had fun making it. That comes across.”

While Zaba charted at No.12 in Australia (and is now approaching gold status), it’s never been higher than No.92 in the UK, although it has sold 18,824 copies, 6,515 of them as streams, according to the Official Charts Company.

But How To Be A Human Being went straight in at No.23, selling 6,628 to date (2,024 streams) over here, suggesting Britain is finally catching on. But for now, Glass Animals remain a band whose name shines far brighter overseas.

“It’s something I’ll never be able to quite put my finger on a reason for,” muses Bayley. “All I can tell you is Australia has that amazing radio station Triple J, that’s what did it for us there.

And I know streaming is a very big thing in America, so maybe that was something to do with it there…”

“America is head and shoulders their most successful country to date,” adds Chancellor. “Zaba ended up doing just shy of 600,000 records round the world, and just shy of half of that was in the States. To be honest, the UK is probably the furthest behind.

We’ve used the international plot to try and work on it here.”

The band’s overseas career began before they’d even signed their record deal, when they hit the festival circuit in France. Caroline then put together an international-only EP.

“We sat round a table,” explains Strafford, “and said, We need to get them out there, this isn’t going to be a ‘sit and wait for the UK story to happen’ [situation], we’ve got to go where the story’s building.

So, way over two years ago, we went out to Australia, did three shows in Melbourne, Sydney and Brisbane, and they sold out. [Triple J] fell in love with them even more, and we built the story for Australia that early.

Playing their music to our international team, they were just so excited about it, that Glass Animals had fans working the record in every country around the world.”

“Without a shadow of a doubt,” says Chancellor, when asked if that is the secret to the foursome’s worldwide success. “That’s what Caroline is; we’ve got lots of passionate people who work within the company.

Give them music that they fall in love with and they’re going to go the extra mile. The UK is a tough place at the moment for young developing bands, and it’s not the be-all and end-all.”

Especially with the US calling. Last month, the band – whose second record went in at No.2 on the US Alternative Chart, and No.20 on the Billboard 200 – completed a run of high-profile late-night chat show performances, and played two sold-out shows at New York’s Terminal 5.

In between this month’s UK headline run and a potentially career-defining show at Brixton Academy booked for March, the quartet’s touring schedule – booked by Greg Lowe at UTA – is heavily America-oriented, with the group currently in the States, and heading back there again in December.

Bayley is happy to be earning his air miles, though, with the overseas-focused success affording him relative anonymity in the UK.

“I love the fact that I can always go home and go to the Londis and buy whatever I need to buy, in my pants, with dribble on my shirt,” he laughs. “That’s fantastic.”

Epworth says Glass Animals are Wolf Tone’s “No.1 priority” at the moment, something Bayley says he’s very much aware of.

“It’s a very small label, and there’s three other artists on it, only one of which has released an album… So, of the three albums ever released on our label, we’ve done two of them,” laughs Bayley.

“There’s a lot of pressure on us to perform financially for them, but I try not to think about it – all we can do is work as hard as we possibly can to keep things interesting.”

“It’s really exciting for us as a label,” says Epworth, affirming their status.

“It gives us a place to start to do other things; it’s something that shows that the way the label operates can work for artists, and there’s obviously an incentive for them to come and sign with us. So thanks Glass Animals!”

While Epworth believes the band have potential to pursue any direction they choose with their next album, he says that direction will be up to them.

“I’m lucky enough to be here to support them to do it, and see what new and crazy ideas they come up with,” he says.

Bayley’s goals for the future, however, read somewhat modestly for a band on the brink of international superstardom…

“I’d love to tour Japan – we haven’t done that yet,” he says, “There are a lot of places I’d love to tour. And there are lots of artists I’d like to work with...”

Er, what about playing Wembley Stadium and being the biggest band in the world?

“That’s all fun stuff,” says Bayley with a pragmatic laugh.

“And, as the venues get bigger, that gives us more options to do even wilder stuff with our shows. But you can’t count on that stuff happening… I’d rather keep focusing on the next step.”