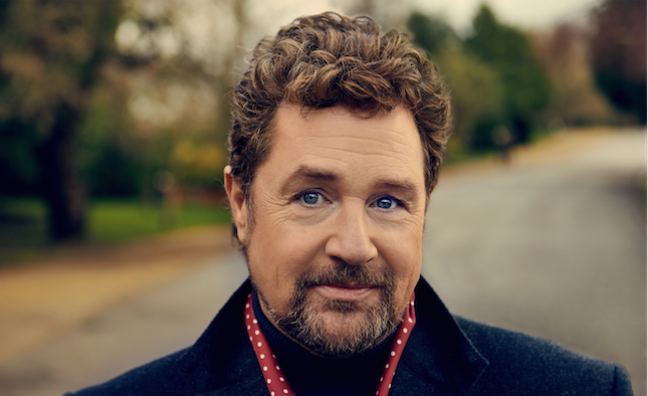 27 years after he topped the album chart with his eponymous debut solo album, Michael Ball returns to the summit with Coming Home To You.

Coming Home To You is Ball’s first album since his back-to-back No.1 collaborations with fellow tenor Alfie Boe, Together (November 2016), and Together Again (November 2017). Thus providing his fourth No.1 in all, it is also his 22nd Top 75 album, and his ninth Top 10 album, it can’t match those Boe collaborations for first week sales.

Blending original recordings of the former with newly-recorded instrumental elements provided by the latter, The Carpenters With Royal Philharmonic Orchestra reached No.8 last December and, with Richard Carpenter on a UK promotional tour, re-enters this week at No.10 (5,880 sales).

More than 21 years after Pleased To Meet You completed a hat-trick of consecutive Top 10 albums for Sleeper, the reformed trio return with Modern Age, which can’t quite match the lofty perches achieved by its predecessors, opening at No.18 (3,991 sales).

Nearly two years after their first collaboration, Drillers x Trappers, failed to dent the Top 200, the drill/trap pairing of RV & Headie One open at No.21 ( 3,729 sales) with their similarly-titled second album, Drillers x Trappers II, which also includes contributions from DigDat, Kojo Funds and Unknown T, among others . RV has yet to make a solo impact but Headie One’s second solo set, The One Two, reached No.32 last June.

Singer/songwriter Jenny Lewis’ solo career has run adjacent to her career as a member of several bands over the years, including Rilo Kiley, The Postal Service and Jenny & Johnny. Her first solo release since 2014, and fourth solo release in all, On The Line becomes her first Top 40 entry, debuting at No.27 (3,155 sales).

Between The Earth And The Stars debuted at No.23 in Germany last week for Bonnie Tyler becoming her highest charting studio album in that country since Bitterblue in 1992. It opens its account here at No.34 (2,639 sales) for Tyler, becoming her sixth Top 75 entry in all, and her highest charting studio album since Secret Dreams & Forbidden Fire reached No.24 in 1986. 67-year-old Tyler duets with three even more senior male stars on her album – 69-year-old Status Quo legend Francis Rossi, 78-year-old Cliff Richard and, in a throaty croak-off, 74-year-old Rod Stewart.

Also new to the Top 75: Bad Habits (No.26, 3,235 sales), the second chart album by Canadian rapper Nav, whose 2018 release Restless reached No.24; The Dirt (No.32, 2,746 sales), the soundtrack to a new bio-drama of Motley Crue, which brings the glam metal act its seventh chart album, and includes a trio of new recordings alongside previously released material; A Place We Know (No.37, 2,516 sales), the debut album by 31 year old Australian singer/songwriter Dean Lewis, whose only hit single thus far, Be Alright, reached No.11 last September; No Words Left (No.38, 2,486 sales), the fourth straight Top 40 album by London indie/folk singer/songwriter Lucy Rose; The World Is Yours 2 (No.42, 2,336 sales), New York rapper Rich The Kid’s second album, arriving 50 weeks after The World Is Yours debuted and peaked at No.25 (2,861 sales);When I Wake Up (No.46, 2,273 sales), the third album by rapper/singer Maverick Sabre, whose 2012 debut, Only The Brave, sold 44,242 copies to debut at No.2 behind Lana Del Rey’s Born To Die.

With 60 songs spread over 3 CDs, UMOD’s new Country Forever compilation debuts at No.1. Perhaps surprisingly the first country album to top the compilation chart in the 21st century, it sold 10,684 copies last week – the highest for any compilation for 12 weeks.