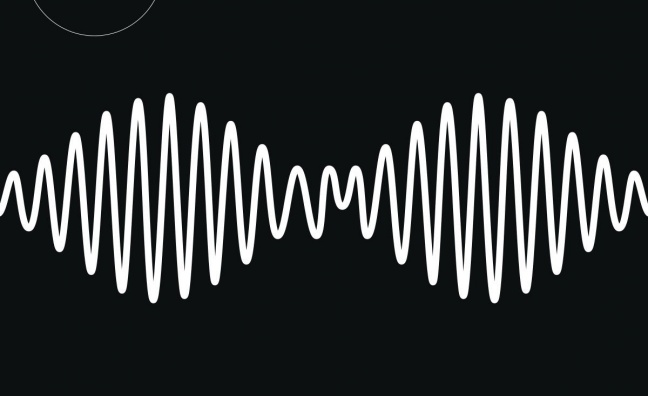 Five studio albums, five instant number ones - that's the proud record of The Arctic Monkeys, whose latest success, AM, storms to the top of the chart with an impressive first week sale of 157,329. The only artist album to sell more copies in a week this year is Daft Punk's Random Access Memories, which opened 16 weeks ago on sales of 165,091.

Following hot on the heels of hit singles Do I Wanna Know? (number 11) and Why'd You Only Call Me When You're High? (number eight), AM sold 69,432 copies digitally last week, a total beaten only by six albums in chart history. It also sold 5,170 copies on vinyl, the fifth highest tally for an album in that format in the 715 weeks that have elapsed thus far in the 21st century.

Previous Arctic Monkeys albums followed a perfect but downward spiral, with each album opening with a lower sale and spending fewer weeks at number one than its predecessors - a pattern now broken by AM.

Arctic Moneys are the 24th group to have five number one albums but only the fifth to do so with their first five albums, following The Beatles, Oasis, Coldplay and Keane. The only acts to have had more number one albums in the 21st century are Robbie Williams (eight), Eminem and Westlife (seven apiece) and Madonna (six). Coldplay, Oasis, Bruce Springsteen and Keane have also had five. The only acts to have had more than five number one albums in a row are Abba (eight), Led Zeppelin (eight), The Beatles (seven) and Eminem (six). Of these acts, however, only The Beatles' run started - like Arctic Monkeys' - with their first album. Arctic Monkeys lead singer Alex Turner also topped the album chart with side project Last Shadow Puppets in 2008, when their only album to date, The Age Of The Understatement debuted at the summit on sales of 51,186 copies. It has sold 285,082 copies.

While their melancholically mellifluous second hit single Strong climbs 17-16 (16,871 sales), London Grammar's first album, If You Wait, posts a number two debut (33,130 sales). Also housing their recent number 31 hit, Wasting My Young Years - another moody masterpiece - the album is on their own Metal & Dust Recordings label via Ministry Of Sound.

Goldfrapp score their fourth straight Top 10 studio album, debuting at number four (13,817 sales) with Tales Of Us.  Surprisingly, their most recent release before Tales Of Us - the compilation The Singles - didn't do nearly as well, peaking at number 33. Tales Of Us improves on the debut position but not the first week sales of Goldfrapp's last studio album, Head First, which both opened and peaked at number six in 2010 with 23,261 takers.

One of the hottest new bands of 2013, The Strypes hail - like my mother - from the tiny Irish town of Cavan and have been making a big noise, with a series of triumphant festival appearances in the summer. Their first album, Snapshot, debuts at number five this week (11,553 sales)

Fleet of foot, Rod Stewart quicksteps his way to a six week peak with Time, which dashes 26-6 (10,194 sales) following his appearance on the season premier of Strictly Come Dancing. Rod's new album of old recordings, Rarities makes a good first impression too, debuting at number 35 (2,965 sales).

Only 10 months after making his chart debut with Trilogy (number 37, 6,285 sales), alternative R&B artist Weeknd from Canada debuts at number 12 (5,732 sales) with follow-up, Kiss Land. US R&B singer Janelle Monae also makes big strides between her first album The ArchAndroid (number 51, 3,555 sales) and second album, The Electric Lady, which debuts this week at number 14 (5,498 sales). Monae's profile was raised enormously by her guest appearance on Fun's chart-topper We Are Young last year. It is not on the album, although collaborations with Prince, Solange Knowles, Erykah Badu and Miguel are.

Now That's What I Call Music! 85 is the number one compilation for the eighth straight week, selling a further 22,010 copies.

It's a more muted Roar from Katy Perry this week but sales of 103,444 copies are enough to give her an extremely comfortable second week at number one with the introductory single from Prism, which drops in five weeks.

Macklemore & Lewis - who were unknown at the start of the year - make it a hat trick of 2013 Top 10 smashes with Same Love (feat. Mary Lambert) jumping 20-9 (23,621 sales) on its third chart appearance. Parent album The Heist has yet to come near to matching its singles' chart peaks, having climbed only as high as number 25. That was 17 weeks ago, but it is heading north again, climbing 46-34 (3,050 sales) this week.

Early midweek sales flashes showed Coldplay and Example to be on course for their 14th and eight Top 10 hits respectively. They may still get them but with sales cooling as the week progressed, Coldplay's Atlas debuts at number 12 (19,546 sales) and Example's All The Wrong Places at number 13 (18,616 sales).

After debuting last week at number 50 on two days sales, Mutya Keisha Siobhan's Flatline perked up considerably in the first of the midweek sales flashes on Tuesday, when it was ranked 34th. But the boost - like its initial impact, due largely to their performance of the track on Alan Carr's Chatty Man show on Channel 4 - was short-lived, and the single ends up falling to number 54 (4,604 sales).