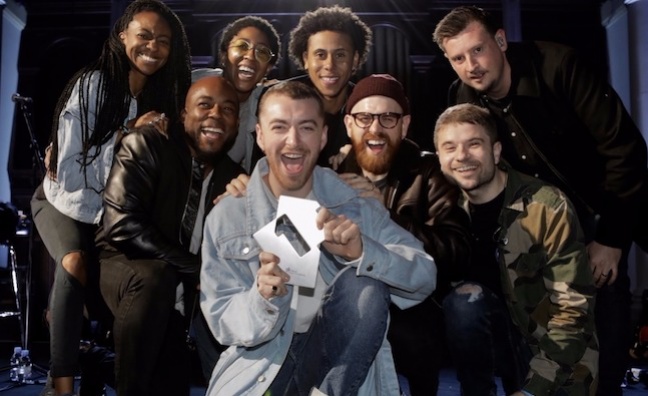 Four of five previous Sam Smith singles to reach No.1 spent a single week at the summit but his sixth, Too Good At Goodbyes, secures its second week at the summit, albeit on sales that are off 24.80% week-on-week at 46,415, including 27,792 from sales-equivalent streams.

Rappers Post Malone and 21 Savage have had three and two Top 75 entries respectively in the last year but pooling their resources for Rockstar - which credits Post Malone Feat. 21 Savage - they sail into the Top 10, securing by far the week's top debut, landing at No.5 (28,333 sales). It made a great start on streaming, where it ranked No.3 for the week but lags a little on paid-for sales, where it ranks 22nd. It is the first single from Malone's upcoming second album, Beerbongs And Bentleys.

Another duo who have formed a successful alliance is Avicii & Rita Ora. They are somewhat more seasoned chart campaigners than the above, and their single Lonely Together brings Avicii his ninth Top 10 hit and Ora her 10th as it climbs for the fifth week in a row, 21-10 (22,990 sales).

Zayn (Malik) became the first One Directioner to secure three Top 10 singles away from the group only last week - and the band's solitary Irish member Niall Horan is in pursuit of his third with Too Much To Ask, which debuts at No.24 (14,604 sales). Horan reached No.9 with first solo single This Town, and No.7 with follow-up Slow Hands. All three tracks are on his first solo album, Flicker, which drops next month.

Craig David sealed his return to prominence with 2016 album Following My Intuition reaching No.1 while spawning five chart singles. His next album, The Time Is Now, isn't out until next year but the first single, Heartline, debuts at No.35 (10,216 sales) this week becoming his 27th hit since his 1999 debut.

As Foo Fighters' ninth album, Concrete And Gold, debuts atop the album chart it surrenders its second Top 75 entry in the form of The Sky Is A Neighborhood (No.63, 6,025 sales), three months after Run also reached No.63. It brings their overall tally of chart singles to 27. Run itself is also back in contention, re-entering at No.76 (4,804 sales).

Chris Brown draws ever closer to his 16th Top 10 single with Questions on the rise for the fourth straight week, advancing 13-12 (21,046 sales). The track is the first hit from his upcoming new double album, Heartbreak On A Full Moon.