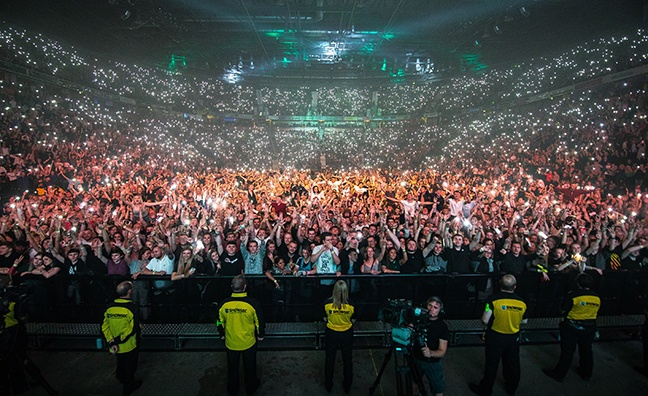 The horrific attacks in Manchester and Las Vegas, following on from the Bataclan atrocity, have put venue security under the spotlight like never before. Here, a handful of live experts weigh in on how the business has changed since…

What happened in Manchester on the evening of May 22, 2017 was the live industry’s worst nightmare. A terrorist attack outside the city’s arena as fans were leaving an Ariana Grande concert claimed 22 lives – including children – and changed the face of venue security forever.

“Immediately post-Manchester, there was a total review of the security of virtually every venue in the UK,” says Reg Walker of Iridium Consultancy, which works with arenas such as The O2.

“There were a lot more physical barriers put in place to prevent various types of attacks, infrastructure was upgraded, a hell of lot of work has been done.

“What’s interesting is that most venues have kept those measures in place necessary to protect the public.

However, there is significant pressure to reduce security going forward, purely on a cost basis. We need to find a balance between what will satisfy the bean counters and what can be practically done on the ground.”

Speaking to Music Week ahead of Manchester Arena’s reopening in September, the venue’s general manager James Allen warned: “The industry as a whole will have to change - everybody’s going to have to move on to a new level of reassurance for the public.”

“Security has always been of absolute paramount importance to us day-to-day, but obviously what happened in Manchester really brought it home,” he says.

“As far as we are concerned it was an attack on us as an industry - we were completely in solidarity with Manchester.

“Our biggest focus has been on the reassurance factor. We’ve put in some additional measures since Manchester and the level of security that customers see is very much about making sure they feel reassured and safe when they come into the venue.”

Dunstan stresses the importance of maintaining a balance between customer safety and the overall experience.

“We don’t want customers to feel as though they have to go through a lot of inconvenience when they are coming into the venue,” he says.

“So we’ve focused on making sure we retain that balance between service and safety. We continue to review that to ensure that we’re getting customers in as quickly as possible, but still making sure they’re going through the necessary checks.”

The Manchester attack prompted the events industry to congregate for the inaugural Event Safety & Security Summit (E3S) at the Intercontinental London Hotel at The O2 in October.

Security minister Ben Wallace told the gathering the live music industry was at the “vanguard” of counter-terrorism following Manchester and the Las Vegas attack in October, when a gunman opened fire from the 32nd floor of the Mandalay Bay Hotel towards the Route 91 Harvest Festival, leaving 58 people dead.

The invitation-only security summit was produced by the organisers of the International Live Music Conference (ILMC), in collaboration with the European Arenas Association and National Arenas Association in the UK, and was attended by 250 delegates from 22 countries.

“It was a very useful day and what was so positive about it is that there is very much a collective approach from all parts of the industry that we’re all in this together,” surmises Dunstan.

“Everybody in that room, from all parts of the supply chain, were very much committed to ensuring that we treat this from an industry perspective.”

Andy Cotton’s TAO Productions has been responsible for tour safety for the likes of Ed Sheeran, Diana Ross and Michael Ball, as well as major outdoor festivals including Beautiful Days, Eden Sessions and The xx’s Night + Day shows.

Cotton fears the fixation on terrorism could lead venues to lose sight of other problems, such as drugs and crowd dynamics.

“We’ve got to look at the whole risk to events, as opposed to just the terrorist risk,” he says. “Yes, you have to look to try to mitigate knife and vehicle attacks, but it has to be proportionate as well.”

Cotton was in and around Manchester Arena on the night of the attack. “We’d done a safety audit at Manchester Central and we were going across to do a similar thing at the arena,” he recalls.

“We got caught up with fans outside the building that couldn’t find people and there were certain things we could learn from that like, ‘What do kids do when they go to a gig?’

They film the bloody thing and put it on Facebook - so they couldn’t get hold of their parents because their phone batteries were dead.

So we have started making sure that we have multi-chargers in all our emergency kits.”

He adds: “The thing to bear in mind is that [the bomber] never got into the building. When our problems lie outside of venues, then who is responsible for that? Is it the promoter, the venue or the police?”

Walker believes venues must accept the brunt of the burden. “We can’t stop security at the front door and say anything that goes on outside is not our responsibility. That is not acceptable,” he says.

“As we’ve seen, attacks are taking place on the exterior of venues, not so much on the inside, so we need to tackle that threat.

“But there is another side to it as well - forget counter terrorism operations - you have criminal gangs that prey on fans around the periphery of venues all-year-round.”

“Literally every festival that was run under the AEG banner had that higher level of security,” explains co-CEO Steve Homer. “The comfort level that gave customers was really noticeable.”

The promoter had anticipated sluggish sales for Justin Bieber’s BST gig, in particular, since it was aimed at a similar audience to the Grande show.

Yet sales actually increased in the weeks before the gig. “It was a very successful event in the end and we were delighted with it,” adds Homer.

And despite the attacks endured by music events in 2017, ticket sales have continued to hold up well.

“For the first two weeks after Manchester there was an initial reaction,” notes Arena Birmingham’s Dunstan.

“We saw a little bit of an unsettled period for a very short time after the attack, but it bounced back very quickly.”