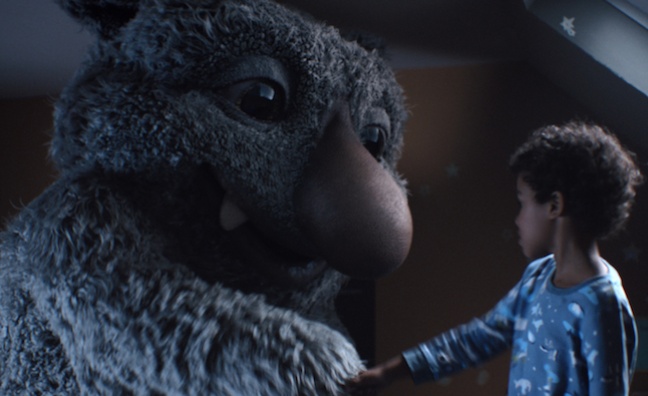 John Lewis has unveiled this year’s Christmas TV advertising campaign, Moz The Monster, directed by Michel Gondry and featuring a Beatles song covered by Elbow. The band’s version of Golden Slumbers is also set to feature on their greatest hits, released by Polydor on November 24.

The campaign will launch on TV tonight at around 9.30pm, including slots on Channel 4 and all of Sky’s own channels.

“This project was such a pleasure,” said Guy Garvey. “Michel Gondry and the song did all the work for us. We are really proud to be involved."

Garvey recently worked on the Cold Feet theme music for ITV, which contributed to the success of Universal Globe at last month's Music Week Sync Awards.

The John Lewis Christmas commercial has become the festive season’s biggest sync opportunity since the 2010 advert featuring Ellie Goulding’s version of Your Song. Lily Allen, Tom Odell and Vaults have also been selected by John Lewis to sing on the ads in recent years.

This year’s advert tells a heartwarming story of a little boywho is kept awake by a 7ft imaginary monster called Moz, who is living under his bed. The Moz The Monster campaign was created by advertising agency Adam&EveDDB and directed by Gondry, who is known for feature films Eternal Sunshine of the Spotless Mind, The Science of Sleep and The Green Hornet as well as acclaimed music videos for Bjork, Daft Punk, the White Stripes and the Rolling Stones.

The Oscar winner has also directed the Levis Drugstore commercial as well as ads for Gap, Nike, Coca Cola, Pandora and Apple.

Craig Inglis, John Lewis’s customer director, said: "This year’s Christmas campaign brings to life the power of children’s imaginations and the joy of  great friendships. Moz and Joe’s story is magical and heartwarming and I’m sure it will be loved by all of our customers, young and old.”

Gondry added: “When I told my ex girlfriend I was doing the next John Lewis Christmas film she said: You have big shoes to fill, this John Lewis commercial must make people cry, don’t forget. Last week I showed it to her and she cried. Phew.”