'It's one of a kind': Now That's What I Call Music MD on why the series continues to prosper 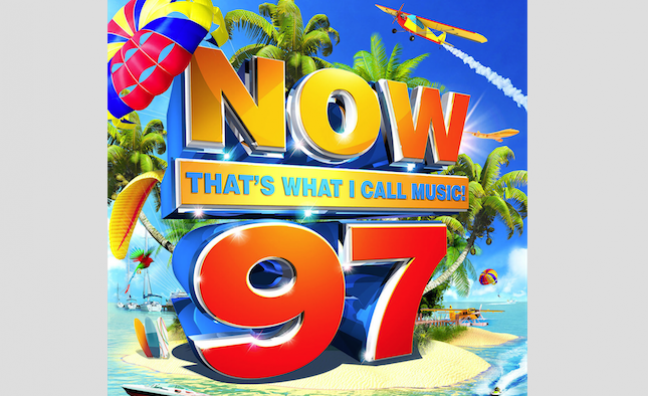 In this week’s edition of Music Week, Steve Pritchard, co-managing director of Now That’s What I Call Music, told us that he believes the compilation series can thrive in the streaming age.

Released in April, Now 96 has sold 508,096 copies to date, according to the Official Charts Company. That makes it the biggest-selling compilation of 2017 so far, and the No.3 best-selling album overall. Follow-up Now 97 is released today and features tracks from Luis Fonsi & Daddy Yankee, Ed Sheeran, Little Mix and more.

Here, in an extensive Q&A, he describes how Now is adapting to the streaming age, opens up about the power of trust and pop nostalgia and examines just how the series has managed to prosper since it was conceived by Virgin Records execs Stephen Navin and Jon Webster in 1983.

How do you feel about the latest edition of the Now series?

We’re very pleased with the track selection. There were certain eccentricities about the chart around Easter when we did the last one, with [tracks by Ed Sheeran and Drake and everything. This album really does reflect the current chart, there’s a good mixture of pop at the moment. It’s good.

Has the recent singles chart revamp had any impact? Do you think it’s a good thing?

I haven’t really got an opinion about it, I’m single-minded in trying to work out the best tracks to go for, there’s so much data now that you can usually cut through any of the idiosyncrasies of certain weeks. I haven’t actually got a feel for what it’s going to do yet. It’s not directly because of the changes, but at the moment there’s quite a fresh chart. It’s moving at a reasonable rate, not too fast, not too slow. It makes it a lot easier for us to compile Now.

How have kept the series going for so long?

Now was the original. It’s had consistent investment, consistent branding and the support of some of the biggest sources of domestic repertoire. Now, with Universal and Sony, we’ve also got really good access to US repertoire. It’s consistency of quality, branding and reasonable marketing investment in each one. It’s the only one of its kind. The public trust it as well.

Can you go further into the public’s relationship with the product?

Depending on how you divide it up there are about six pop generations [since Now started], so there’s nostalgia really. It’s a tried and trusted brand and those are few and far between, Pete [Duckworth] always cites Star Wars. People remember their first Now, it was a present for parents when they were kids and now they’re buying it for their families.

How do you survive in the digital age?

The digital landscape is changing and fixed download is declining with streaming but the ongoing strength of the CD… That’s outperformed my expectations over the past couple of years.

And how do you stay relevant as the world turns to streaming?

We launched a largely chart-based app called Now Music + in 2016. We’re building that gradually. That’s developed with mobile and our consumer in mind. They’re happy to keep buying CDs now, but the app is part of the future plan. We made it as simple as possible for people to enjoy the albums and cut straight to the chase with the chart music available. We have Now products available through streaming services and there are Now playlists and those perform really well. Sony and Universal own a large number of tracks and there’s good business for the owning companies in the streaming world through Now. It generates a lot of streams, it’s huge. The CD remains our biggest direct source of income, but we’re in all the streaming services and the app.

So you believe the brand can keep up with the rest of the music world, then?

There’s a big education element in the streaming space, a lot of people still don’t understand the difference between streaming and downloading. The Now audience are in a place where as CD access is harder, we aim to move people over to the app. It’s a simpler proposition because we’re only offering chart music. Our thought is to educate and migrate when people are ready.

More generally, what’s your take on the compilations market?

I think Now 97 will do well. There’s an inevitable incremental decline as audiences move more to streaming, the compilation chart doesn’t pick up any of the benefits of track streaming from within comp bundles which is quite a big hidden business. But I’m optimistic. Last year, all three numbered Now compilations more than in 2015. Our best defence is to make sure we’re fully functioning in all the streaming spaces for the benefit of the repertoire and the labels, and to try to offer a Now audience-friendly proposition through the app. The move from CD is a lot slower than I thought.

How do you think your rivals are faring?

They’re subject to the same factors, a lot are aimed at a younger audience and that’s a problem. Also the TV audiences they used to rely on… That formula is rapidly changing, ratings are declining, the coverage build isn’t there like it used to be. It’s a lot harder to sustain the non-numbered Now comps. Other comps are possibly hitting a threshold where cost per sale isn’t profitable. It’s a combination of a declining CD market and it being harder to get the right audience coverage. People have had success with digital campaigns but it’s harder to get that instant kick that TV does still offer occasionally.

Now 100 is coming up next year, How many editions can you get to?

Now 100 will make a big splash. As for how many? I have no idea. Whether it exists as a physical CD or a playlist, Now is a valid concept. The awareness, love and nostalgia for it in the UK makes it a worthwhile proposition even if the CD market were to completely disappear. I could still see now 120 appearing as a playlist on a streaming service. People trust the brand. There’s a positive nostalgia in each generation of pop music.