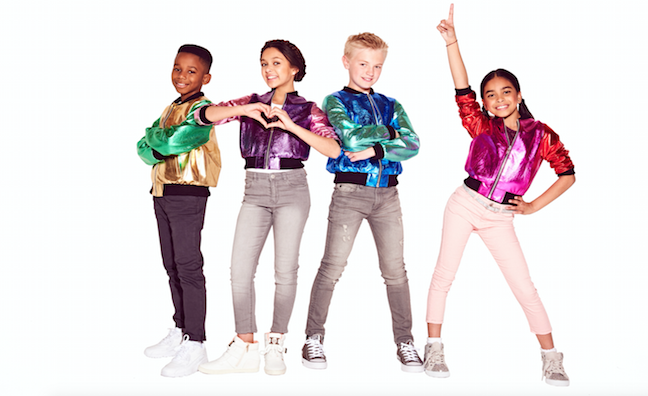 Kidz Bop, the US children’s music brand which launched in the UK last month, has just revealed its first British Kid Pop group, with a debut album set for release on March 31.

The Kidz Bop brand produces albums, music videos, consumer products and live tours, based around the idea of children recording child-friendly versions of pop hits. Launched in 2001, Kidz Bop has amassed sales of over 17 million albums and generated over 1 billion streams. In 2015, the brand accounted for 23% of all children’s music sales in the US and has had 24 Top 10 debuts on the Billboard 200 Chart. Now, following a nine-month nationwide search, four UK performers aged 11-12 have been selected to be the British Kidz Bop Kids.

The group is made up of Ashton, Lois, Max and Twinkle (pictured above from left to right). They will sing on Kidz Bop albums, appear in TV commercials and music videos and perform live concerts at upcoming events across the UK.

They will release two albums this year, with the self-titled debut arriving on March 31 March and featuring 22 songs sung by the group, including, Can’t Stop The Feeling! (Justin Timberlake), Shake It Off (Taylor Swift) and Shout Out To My Ex (Little Mix). A second album is due for release in autumn 2017.

Furthermore, a Kidz Bop UK YouTube channel will also be launched to coincide with the album release. This goes live today (March 3) and will feature music videos starring the group. A Kidz Bop UK website will also be introduced, providing exclusive content and more information on the group. This also launches today.

Kidz Bop has partnered with Universal Music On Demand, ITV, Crown Talent & Media Group and Creative Artists Agency (CAA), with UMOD managing director Simon Barnabas commenting: “We are thrilled to be on-board as distribution partners for Kidz Bop in the UK, and delighted to be part of this exciting phase of the brand’s expansion internationally. We’re certain British kids and parents will enjoy Kidz as much as they do in the US, where the brand has become such a huge phenomenon. The addition of the super-talented UK Kidz kids singing on this album is the icing on the cake.”

Victor Zaraya, Kidz Bop president, commented, “We’re excited to bring Kidz Bop to kids and families around the world, and Britain’s preeminent place in pop music makes the UK the obvious first territory for international expansion. Our strategic partners have been instrumental in helping us navigate the UK market and develop a distinct voice for the brand that will appeal to young British fans.”