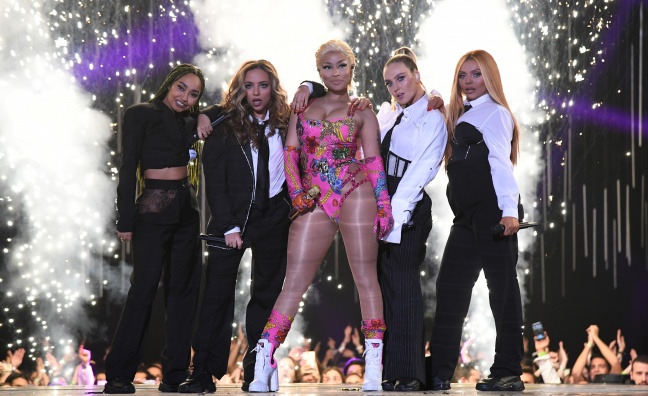 The event took place at Bilbao Exhibition Centre, which was configured for around 9,000 attendees. It was the first time the ceremony had been held in Spain since Madrid in 2010.

Here, Music Week picks up some of the main talking points coming out of the show...

Pop legend Janet Jackson wowed the crowd with a performance of her new single Made For Now, dropping in snippets of All For You and Rhythm Nation along the way. But it was her powerful speech when picking up the Global Icon Award later in the evening that left the most lasting impression. "I feel moved to speak for women's voices who have been stifled," she said. "I am one of those women: women who have been gagged, both literally and emotionally, women who have been abused, women who have been intimidated, women who have lived in fear. I stand with you, you are my sisters. Tonight I carry the hope that a new world is emerging, a world in which caring people - male, as well as female - will no longer tolerate gender inequality. Women, our voices will be heard. We will be heard when we speak out for justice, speak out for a spirit that crosses all borders, recognises the dignity of all people and affirms the beauty of all faiths."

It was Little Mix's first EMAs, and they looked very much at home when joining Nicki Minaj for a run through Girl Like Me to get the 2018 edition off to an electric start. The girl group had also dropped in to the Viacom showcase for an on-stage interview the previous afternoon.

.@LittleMix at the pre-@mtvema @Viacom showcase in Bilbao earlier pic.twitter.com/Fowd9Zzsxe

There was no doubt as to who the biggest winner was on the night. Twelve months on from her solo breakthrough, Camila Cabello took home four awards including Best Artist, Best Song and Best Video for Havana, and Best US/Worldwide act.

A few jaws hit the flaw when Jason Derulo delivered an astounding operatic take on Andrea Bocelli's Time To Say Goodbye prior to performing Goodbye (which includes elements of the Bocellii classic) with Nicki Minaj and David Guetta. Where did that come from?

If the Bilbao line-up lacked the depth of A-list starpower of last year's London EMAs, then the production was typically cutting-edge: Bebe Rexha performed I'm A Mess while in a bathtub surrounded by nurses and 100 dancers; Halsey played Without Me surrounded by Rainfall and US pop rap duo Jack & Jack soared overhead with a thrilling aerial routine for Rise before crash landing onto a sofa, joined by more than 100 fans.

One of the undisputed highlights of MTV EMA weekend has become the MTV World Stage show the night before, which has previously hosted the likes of U2, Duran Duran, Ellie Goulding, Kings Of Leon and The Killers. This time, it was left to Muse to do the honours at Bilbao's huge San Mames Stadium. Blending hits with new material, the rock powerhouses delivered the goods and whetted fans' appetites for imminent new LP Simulation Theory. And thankfully Matt Bellamy could see the funny side of his latest onstage tumble...

The full list of 2018 MTV EMA winners is as follows:

Panic! At The Disco