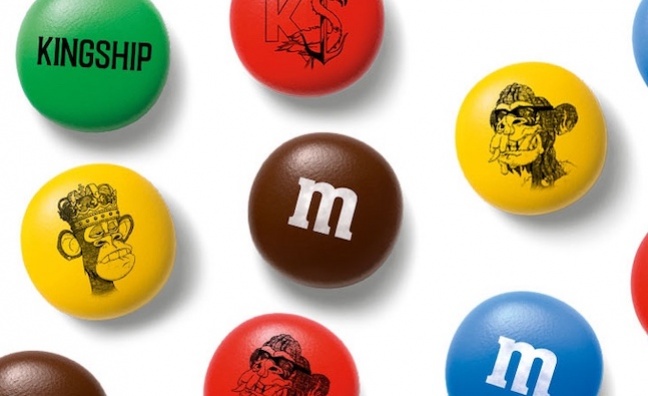 KINGSHIP, the NFT supergroup created by 10:22PM, will appear on limited edition boxes of M&M’s.

The branding deal is in honour of KINGSHIP’s tour rider containing required backstage items, which always includes M&M’s of all colours.

Physical collectible boxes of M&M’s are only available for a limited time. Just 4,000 have been created in total: the gold edition, the rarest version, comes in a white and gold foil gift box and includes custom-printed sweets with KINGSHIP group members Captain, KING, Arnell and Hud in individually numbered boxes from 1 to 100.

M&M’s will also produce only 3,900 exclusive celebratory gift boxes in brown. Additionally, there will be 6,000 gift jars available to fans in the US for a limited time.

M&M’s plans to feature the group’s latest video on their video billboard in Times Square for the next several weeks.

Holders of KINGSHIP key card NFTs were the first to know about this exclusive collaboration. They were given an early opportunity to access the products on the M&M’s site

“Consumers’ expectations for what they want from their favourite brands has shifted, and at Mars, we know we need to be more innovative than ever with such a culturally famous brand like M&M’s,” said Jane Hwang, global vice president at Mars Wrigley. “We’re excited to continue our Mars foray into the metaverse through this partnership with 10:22PM and KINGSHIP, as a way to engage our fans in a new and exciting space.”

“KINGSHIP is a group dedicated to the art of storytelling, so it was a great opportunity for us to both pay homage to rock’n’roll history, and one of the greatest bands of all time, but also create a unique fan experience for those that have joined this community at the start of their journey,” said Celine Joshua, founder of 10:22PM and the creator of KINGSHIP. “We are grateful to Mars and the team at M&M’s for this incredible partnership to help introduce KINGSHIP and NFT culture to the masses, alongside M&M’s, a true icon of pop culture.”

It was a great opportunity for us to both pay homage to rock’n’roll history, and one of the greatest bands of all time

In addition, M&M’s will play a key role in KINGSHIP’s virtual story, with the group travelling to a mysterious island stacked with what appears to be boulders that are later revealed to be a sky-high pile of M&M’s in all six colours.

Since launching in November, the KINGSHIP team has quickly grown to include Grammy award-winning recording artists, songwriters and producers, celebrity animator Jack Lanza and NFT collector Jimmy McNelis, a.k.a. J1mmy.eth.

KINGSHIP, whose Bored Ape characters include rare Golden Fur and Blue Beams Apes, was created by Celine Joshua, who recruited the members of the group from McNelis. In February, 10:22PM announced Manager Noët All (Bored Ape #5537) as KINGSHIP’s manager.

Last month, KINGSHIP sold out their entire collection of 5,000 access-enabled key cards in the form of non-fungible tokens (NFTs). The key cards sold out 24 hours after the start of the mint on Thursday, July 14. The collection ranked No.1 on OpenSea’s Music Chart and ranked as the marketplace’s No.1 Trending NFT collection across all categories on release day.

The collectible key cards feature different members of KINGSHIP and contain unique attributes, some more rare than others. In addition to membership to the group’s virtual world, the key cards will also unlock exclusive access to music, content, products, and a token-gated community. Holders can access a special token-gated channel recently launched in the group’s Discord.