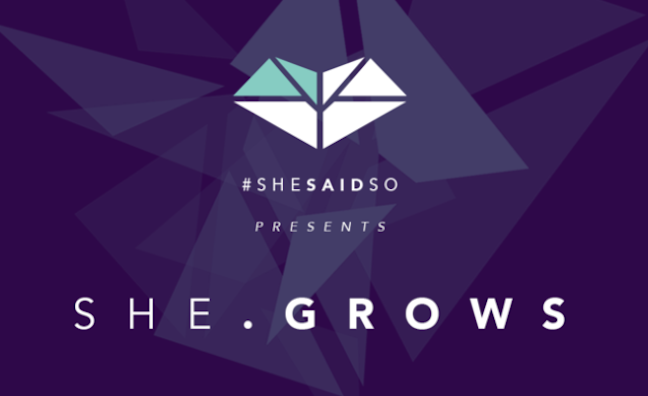 Executives from a range of companies including Universal Music, AIM UK, Warner Music Group, Ninja Tune, Sony/ATV and Cooking Vinyl have signed up for She said.so’s first ever mentorship programme, She.grows.

Shesaid.so is a network of women working in the music industry, with 2,300 members across worldwide, and the new initiative pairs mentors and mentees for a four-month programme running from November 2017-February 2018.

Due to launch at a PPL-hosted event in London on November 21, the programme is designed to give members access to industry advice and guidance. A total of almost 500 names signed up for the new scheme. Among the other companies represented are The Orchard, Deezer, Live Nation, Boiler Room, FAC, Your Army PR, Music Sales, Manners McDade, Imagem, MTV and Songkick.

Shesaid.so founder Andreea Magdalina said: “It is an absolute honour to launch a project that fully encompasses the fundamental values of shesaidso: collaboration, mutual support, the sharing of knowledge, experience and other assets. Marking our 3rd year anniversary, I cannot imagine a better way to celebrate our community than by placing it at the forefront. We are launching she.grows as a mentorship scheme in the UK today with the view of expanding it on a global scale shortly after. Our premise is that the music industry will become a better working environment if we continue promoting and exercising these positive values, at the core of which lay commitment, professionalism and authenticity.

Mentorship officer Holly Manners added: “We are incredibly excited to announce she.grows, a scheme born from an increasing demand within shesaid.so for a confidential space where ideas can be shared, shaped and supported. Being an active mentor and the beneficiary of great mentoring, I hope she.grows can nurture the next generation of inspiring women in the music industry.”

Fellow mentorship officer Harriet Moss commented: “The sign up has been huge, it’s really exciting to see such incredible women offering their time to nurture each other right across the industry - I can’t wait to see how this develops and grows over the coming years and months.”

The organisation aims to achieve a 30% BAME participation rate across its projects, in line with the London workforce stats outlined by UK Music. 75% of mentors and mentees have described themselves as Caucasian, while that ratio is significantly better across mentees.

Aiming to create a network of role models across the industry, She said.so will host meet-ups between the pairs, as well as an event each month, focusing on different development areas for participants, from business skills, to confidence workshops, to mental health.

Also this month, the platform celebrates its third anniversary, with the following events planned:

A party to celebrate MTV’s Music Week, at House of Hackney.

The launch of She.grows, hosted by PPL in Soho, London.

The next event in a series of talks on Music & Tech with Geek Girl Meetup UK.