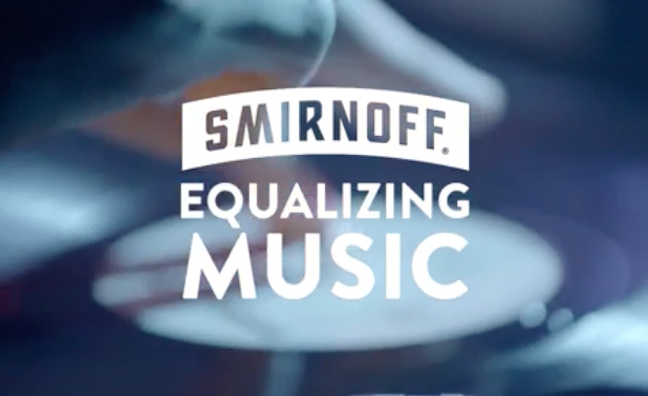 The brand has teamed up with the likes of Spotify, The Black Madonna, Live Nation, Fabric and more to kick start the Equalising Music drive, which is aimed at establishing gender parity across the music industry, with a key focus on the electronic sector.

According to figures published by the company, only 17% of headliners at electronic music festivals in 2016 were women. Furthermore, less than 5% of music producers are women, while only three solo women have ever won the Mercury Prize in its 22-year history. In addition, just 14% of PRS members are women.

In order to raise awareness of gender inequality across the industry, Smirnoff has announced five themed projects. These include a documentary film entitled Equalising Music, which highlights the challenges facing women in the music industry. Contributors to the film include Chicago’s The Black Madonna and Uganda’s DJ Rachael, as each shares stories and experiences from their careers to date.

The firm is also launching a Top 50 Women Making Noise list. In association with publications Thump and Broadly, the list features some of the most prominent female voices in the business, such as Mary Anne Hobbs, Annie Mac and Moxie. Spotify will also be curating a special Smirnoff Top 50 playlist featuring music from artists on the list.

Elsewhere, a Live Nation roundtable will see all Equalising Music partners discuss how they can help bring about change over the next three years, while NTS Radio will broadcast an entire day’s worth of programming to promote and celebrate women in music. The take-over, in association with Smirnoff, will feature eight hours of music and conversation from the likes of The Black Madonna, Moxie, Eclair Fifi, Miss Honey Dijon, Tropic of Cancer, Octo Octa, Debonair, Kim & Pia, Sofie and more.

Completing its programme of initiatives, Smirnoff is also partnering with iconic London nightclub Fabric to offer a series of free workshops for women starting their careers in the field of electronic music. Announced next week and held in April, the workshops are designed to educate and tackle the diversity problem at a grass-roots level.  With contribution from Point Blank Music School, shesaid.so, fabric, the Smirnoff Top 50 artists and a host of successful female agents, talent managers, publicists and more - attendees will learn not only how to make music, but how to release and market music, secure bookings, understand contracts, build relationships and navigate the industry.

“The electronic music industry has been sidelining female talent for far too long,” said Leila Fataar, head of culture and entertainment at Diageo, Smirnoff’s parent company. "Something needs to be done. With a three-year, multi-million-pound plan in place, we are putting our money where our mouth is. We want to ensure the best talent are headlining, regardless of gender and not influenced by tokenism. We, through the Smirnoff Sound Collective platform, are working with the most forward-thinking people in the industry to figure out the best way forward to enable genuine, long-lasting change.”