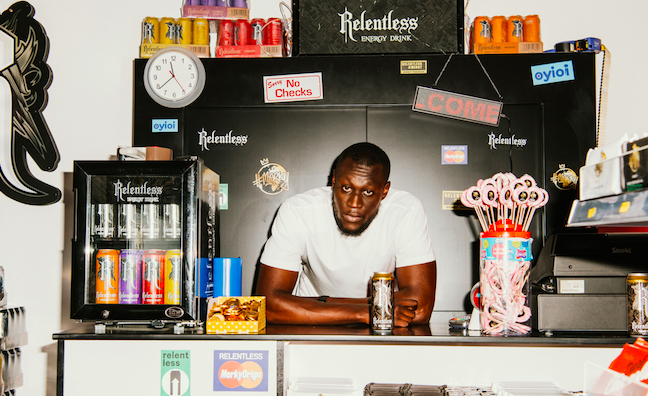 Stormzy has unveiled a new partnership with Relentless Energy Drinks as the promo campaign for his comeback gathers pace.

Stormzy returned last month with Vossi Bop, which has topped the singles charts for the last two weeks. It has 257,551 sales to date, according to the Official Charts Company.

Now, the Croydon rapper has launched #Merky News, a pop up in which he takes over a London newsagents to meet fans and hand out special #Merky cans of Relentless. The cans hit shelves widely on July 1.

Stormzy was behind the counter this afternoon (May 16) in the Soho shop, which will also be open from 12-7pm on Friday, May 17. Fans aged 16 and over are able to take home a can of the energy drink and those under-16 will be offered various other items of #Merky News merchandise.

For every special can purchased from July 1, fans will have the chance to be part of an unspecified ‘#Merky experience’ slated for autumn this year.

That, of course, comes after Stormzy’s headline Glastonbury show.

Details of the follow up to his chart-topping Gang Signs & Prayer are yet to be confirmed, but the campaign is gathering pace.

Stormzy’s manager Tobe Onwuka was among the nominees for Manager Of The Year at last week’s Music Week Awards, while Atlantic co-head of A&R Alec Boateng collected the A&R Award on behalf of the major, which previously inked a deal with #Merky.

Read an interview with Boateng about Stormzy’s new music here.

To all my supporters who are 16+ come down to The Merky News shop from 4.30pm-6.30pm, 52 Brewer Street, Soho W1 to pick up an exclusive @relentlessenergydrink Merky can ???????? #MerkyNews #Merky #StormzyxRelentless