'Change in the industry is inevitable': 7digital's saviour Tamir Koch on his blockchain vision for the biz 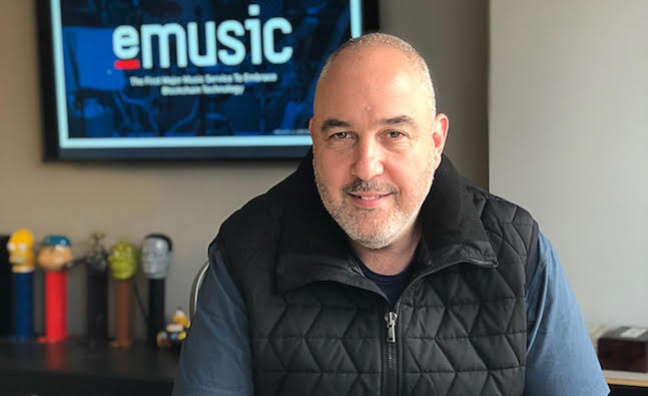 Troubled 7digital is under new ownership.

The B2B digital music firm is now controlled by a consortium headed up by eMusic president and tech investor Tamir Koch, who joins the board as chairman. Koch and 7digital CEO John Aalbers are interviewed in the latest issue of Music Week.

Koch and David Lazarus, an executive director of South African firm RAM Hand-To-Hand Couriers Group, now have a controlling stake of 69% in 7digital. They are set to join the board just as the company is urgently seeking a cash injection of £4.5 million by the end of the month to fend off the prospect of entering administration.

The consortium has invested £1.3m and pledged to put in more as part of the company’s fundraising. Here, Koch explains why he believes 7digital can still be a major player in the streaming economy…

Why did you want to take a controlling stake of 7digital when it’s having cash problems?

“If you look at the 2018 results, yes, the company lost money and there was a problem with the fact that they lost their biggest client with Media Markt Saturn. So that’s a shame, but actually the trajectory was good, revenues grew, gross profit grew, EBITA grew a little bit. If Media Markt Saturn had stayed [as a client], actually the company would be breaking even right now.

“The 2018 results were actually pretty good and [7digital] is on its way to gross profit. Sometimes it happens, a major client leaves and that brought that stock down and brought the company into some trouble. The more important reason we came into 7digital, which was interesting for us from the get-go, is the eMusic blockchain project.”

Why is blockchain potentially significant for rights holders and DSPs?

“I am a tech entrepreneur, that’s what I’ve been doing for the past 24 years, since the dot com [boom]. My first company started in 1995. So I obviously recognise technology and I can tell that blockchain is 100,000% the future. It is going to replace big data and databases because blockchain in its core technology is more secure, so you can’t hack it. Second – and importantly for the music industry – it’s open and transparent and everything is public on the chain. That is critical in my mind. I’ve been in the music industry over 10 years, and there are so many intermediaries and so much inefficiency in the system. We felt that with eMusic as a brand and champion of the indies, that the technology would be right to solve the issues of the the music industry to remove all the inefficiencies.”

The company needed cash and we solved that problem

Why was 7digital central to that vision for blockchain?

“eMusic is a D2C platform, a well known niche player that has been there from the get-go. eMusic Blockchain is more about the distribution to every digital service provider, and that’s why 7digital is so critical because that’s what 7digital does. They have a catalogue of 60m tracks, they ingest everything. [Artists] want to be distrbuted to everyone – not just eMusic, they want to be on Spotify, Apple Music, Deezer, Google, Amazon – that’s what it so exciting about bringing blockchain into 7digital, because they already do that.”

Which existing eMusic clients do you have lined up for the blockchain project?

“Among labels and DIY artists, we have tens of thousands of artists lined up. It will be eMusic’s licensed labels and the artists that want to go and distribute themselves.”

Do you think majors and other big labels will come on board?

“I think so because the change in the music industry is inevitable. The most important thing is the metadata and royalty data. We live in the world of digital, it’s 2019, it’s time to move on – there’s no reason everything shouldn’t be out in the open. The change that we’re doing is inevitable. You can argue whether it will be eMusic and 7digital – we obviously believe in it – but the change is inevitable because of the current state of the industry where the DSPs don’t make a living. Forget about Apple, Amazon and Google, because they are great service providers for music, but they don’t make their money from music. Look at Spotify, it’s losing half a billon dollars a year [Spotify is forecasting a loss of up to $404m in 2019]. Pandora was on the verge of bankruptcy when Sirius bought them. So it doesn’t work in the DSPs. But it’s actually a lot worse on the artist side. They are not making any money from music today.”

Don’t you need to secure major new clients such as Spotify and Apple Music for your blockchain plan to succeed?

“They will come in any case, because we are offering them a better 50-50 model. It is getting out all those inefficiencies with regard to distribution and royalties. We just want to make the system streamlined and better in a way that works for everyone. Because of the technology, it can be done. It couldn’t be done before, you needed all those collection agencies. It’s the lack of transparency that’s a problem for the industry.”

What changes are you planning to make happen at 7digital?

“We’ll come on board, we’ve just become the controlling [partners], we’re not announcing anything yet. We’re coming in as non-executive [directors] to the board, so we will learn and see how [to support the company]. Bringing the cash into 7digital is just one aspect, it’s obviously a critical aspect, the company needed cash and we solved that problem. We also need to make sure that the company is self-sustainable and growing and that is our plan with the management.”

To read the full Music Week story on the rescue of 7digital, including an interview with CEO John Aalbers, pick up the latest issue – or subscribers can click here.