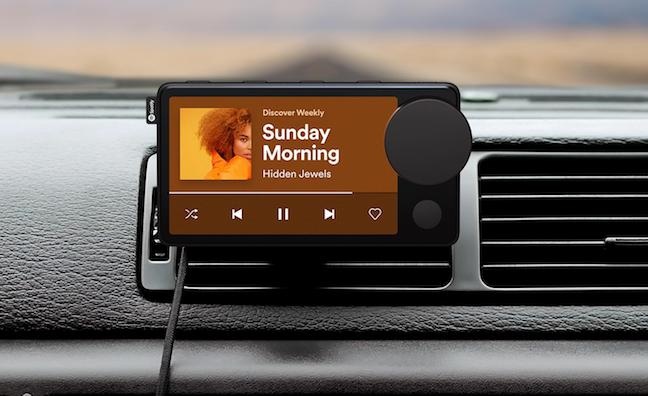 Spotify CEO and co-founder Daniel Ek has spoken about the launch of Car Thing, the new smart device for the car.

The streaming giant is offering the device free for US customers who sign up now. The anticipated retail price is $79.99.

The move is significant for Spotify, which has previously relied on other manufacturers’ devices to reach music consumers.

Speaking during the Q1 earnings call, Daniel Ek said: “The most important thing as you think about audio products is that the car happens to be a major use case. So if you look at car radio, which is still today where most of the offline radio listening happens, it is pretty clear that it's an ongoing transformation that is going on. If you look at cars like Tesla, etc, you see it very clearly where these streaming services are now the de facto radio in the car. And so Car Thing is our attempt of speeding up that progress into a future where you will have just as great experience as you have on your mobile, in your car.”

Ek clearly sees the car as a battleground for listeners as he continues to make Spotify the market-leading challenger to radio.

“You can now use that as your in-car entertainment system instead of the antiquated radio systems that most people have in the car,” he said. “And early results are just very, very encouraging. It seems like we've really struck a chord with what consumers want. And so we're seeing a lot of excitement, but it's, of course, very, very early. And I think based on how people will use the product, we will certainly think a lot more about what the appropriate go-to-market strategy will be and how we can most effectively roll it out.”

Car Thing connects to the Spotify app on the user's smartphone and works with systems including Android Auto and Apple CarPlay. The voice product is designed for ease of operation in the car and frees up the user's phone - "let your phone do phone stuff" says the marketing for Car Thing.

The move by Spotify coincides with the launch of Dolby Atmos for in-car listening. 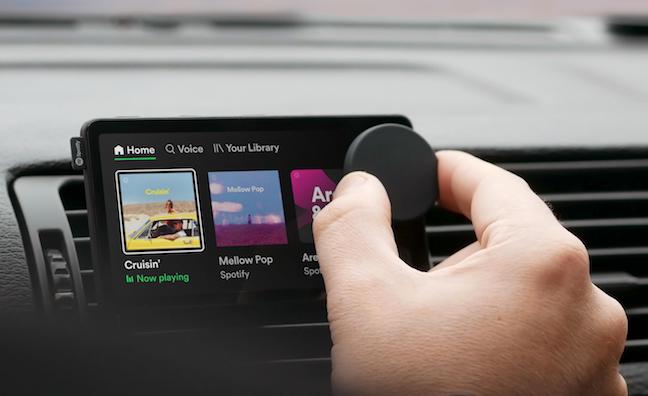 Spotify’s global consumption hours continued to grow in Q1 on a year-on-year basis. Per user consumption grew in North America and Europe, while developing regions showed signs of improvement but remained below pre-Covid levels.

Spotify has previously integrated its service directly with car manufactuers. Daniel Ek said that he sees Car Thing as a way of increasing engagement among Spotify users – a key factor in reducing churn rates.

“I think that's exactly the right way to look at it,” he said. “I mean if you look at audio as a category, it has three distinct use cases. One is in the home, one is on the go and one is in the car. In the home, it obviously competes with other forms of media like video, etc. On the go, there's a lot of things you can do, but audio happens to be a very strong medium there, too. And in the car, obviously, video and other types of immersive experiences are not very common. So audio there happens to be a very, very big part of overall what people do in the car. And especially in the US, the car use case is obviously massive.

“So I think you should look at Car Thing as a way of us full stack going in and reimagining what the user experience in the car for the next-gen car entertainment system should look like. This is our version of that. And I think this is also why it's so pleasing to see the early results of that and how engaged consumers were in just sharing the message and being super-excited about that. So we're very encouraged with it, but it's very early days.”

If you look at car radio, it is pretty clear that it's an ongoing transformation that is going on

Daniel Ek was asked about the wider global roll-out of the Car Thing device and revenue opportunities.

“We are still shipping the products to the consumers that signed up,” said Ek. So “it's too early to say, I think, from a broader roll-up perspective. But as we mentioned there, when we roll it out broader, it will likely have a consumer price point as well and not be a free product as it has been in this early innings.”

Ek also addressed the impact of price increases rolling out in 12 more markets, including the UK and US, and whether other DSPs would follow.

“So I'm not sure, to be honest, but that was never a deciding factor in how we approach the decision,” he explained. “We focused on our business and the data that we're seeing. it's very, very clear and very, very compelling data, which is we see enormous amounts of engagement with our consumer, and it's been growing year-over-year-over-year as we've been improving the proposition, both in terms of better personalisation, better features, but obviously expanding the content library significantly with the addition of podcasting and exclusives as well.

“So on the back of that, we feel very comfortable about doing that. And you should obviously look at our expansion of these price increases as that we see the strategy working.”