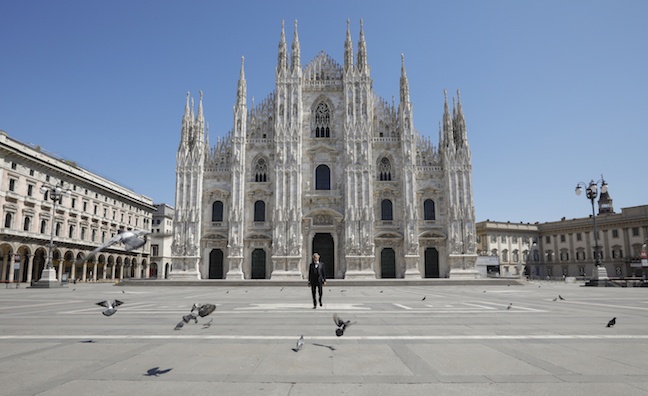 The team behind Andrea Bocelli's historic Music For Hope concert have spoken to Music Week about the "remarkable" record-breaking event.

Streamed exclusively live via YouTube from the empty Duomo in Milan on Easter Sunday, the 30-minute broadcast has already become one of the biggest musical live stream performances of all-time and the largest simultaneous audience for a classical live stream in YouTube history. The video reached 2.8 million peak concurrent viewers and received more than 28m views from across the globe in its first 24 hours. Views have since gone on to top 35m.

The "once in a lifetime" event was promoted by the City of Milan and the Veneranda Fabbrica del Duomo and produced by Sugar Music, Universal Music Group & Decca Records in collaboration with YouTube, with the aim of delivering an uplifting message of love, healing and hope to the public through music, at a time when it was most needed.

Bocelli's co-manager Francesco Pasquero, of Maverick Management, told Music Week the production was the most challenging he had ever worked on.

"I remember when Andrea did a massive 60,000 people event in Central Park in 2011 and it was super complicated, but you still had the possibility to work in offices, travel and meet people," he said. "This event was organised entirely in the last three weeks via Zoom, Skype or FaceTime, so you can imagine the amount of video calls we had to do to put this together. It was a remarkable achievement, incredible."

It is something that will be remembered for years and years

Pasquero said around 15 people were involved in staging of the performance, which has subsequently been made available on music streaming services, and the public response had far exceeded expectations.

"I personally was expecting, let's say, 10 million views," he admitted. "But we reached 34 million in less than 48 hours, which is an incredible result. It is one of the most streamed events in YouTube history and the biggest classical music event in the streaming world ever. So this is something that will be remembered in years and years.

"Andrea's biggest single, Perfect Symphony with Ed Sheeran, did 60 million views in a couple of years. Now we're close to about half of it in 48 hours, so it's an extraordinary result."

Accompanied only by the organist, Emanuele Vianelli, Bocelli sang a carefully chosen selection of pieces, specially arranged for solo voice and organ, closing with Amazing Grace.

“I am overwhelmed by the number of people, of all nationalities, who tuned in for Music For Hope. From my very first discussions with the city of Milan, the Duomo Arch Priest and Andrea himself at the beginning of March, I would never have imagined such an outcome," said Filippo Sugar, president of Sugar Music. "I believe this shows how much this moment of collective prayer through music was needed. A moment to silently mourn our losses but at the same time believe in the rebirth of us all, our cities and our countries. The real message of Easter, rebirth, brought by Andrea’s voice to all of us.

"I would like to thank Andrea for his courage and his extraordinary emotional performance. A huge thanks to all the wonderful people that helped to make this happen, working remotely, around the clock, with all the restraints on the ground. We have been able to do something that will probably stay in our memories forever.”

“When Filippo Sugar came to us with this idea and asked for our help in producing Music For Hope, and then amplifying it globally, we never imagined just how significant and impactful it would end up becoming," added Rebecca Allen, president of Decca Records. "From our very first call with Dan Chalmers at YouTube, we knew that we were in the best hands possible to deliver this moment to a huge global audience. Dan and the team at YouTube believed, and helped us to create an event that made the world stop and reflect.

"The team at Decca and the wider UMG family were humbled to have played a part in delivering such a poignant moment, during these very difficult times.”

“Music has the power to unite communities from around the world in the most unique and momentous ways. In such an unprecedented time, it’s critical we rally together and continue connecting through music. YouTube is honored to have played a role in making sure the world could to come together, as one music family, to see, hear and listen to Andrea Bocelli’s performance on such a historic day in time,” said Lyor Cohen, YouTube’s global head of music.

Dickon Stainer, president and CEO of Global Classics & Jazz, Universal Music Group, added: “On Sunday, the music of Andrea Bocelli provided a balm to the soul of the world. The event was a demonstration of remarkable teamwork. Universal Music and Decca Records are honoured to have played our part.”