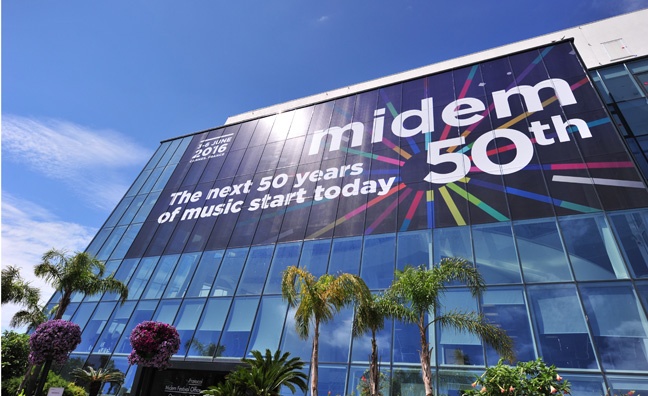 The fourth and final day of the MIDEM conference began in Cannes with a panel entitled A Roadmap To St-A&R-Dom, exploring the different approaches to A&R from around the world.

A&R and label manager Patrick Larsson, of Playground Scandinavia, said: "The world has become very localised, especially for us in Scandinavia. We're happy staying in Scandinavia with our brands, brands meaning artists. We have huge streams with local rappers who rap in Swedish, or singer/songwriters. We don't need to go abroad.

"If you have a certain type of artist, there might be a similar artist making noise in another market. Why do you try and find some kind of ways to collaborate? Be smart, think about solutions."

BMG SVP, creative Andrew Gould said: "One in every six albums in the US is from a British artist. Then you look at what's happening in Australia with Troye Sivan, Sia, Broods, Lorde. I think if you're not paying attention to what's happening in international markets, you're kind of asleep at the wheel."

"Streaming revenues are definitely hurting substantially," added Gould. "The songwriter and producer of All About That Bass came out and said, off of something like 178 million streams, they made $20,000 publishing. Everyone talks about the value gap, what does it mean – I think that's a pretty telling number right there and it's very scary. We've still got to do a better job of figuring out the monetisation of songs on streaming platforms."

Elsewhere, legendary producer and Mute Records founder Daniel Miller, who has worked with acts such as Depeche Mode, New Order and Nick Cave & The Bad Seeds, was the subject of the Lessons From An A&R Game-Changer session.

"A&R is so much about making the records as well as finding the artists," he said. Miller said that, although the discovery process of new music had changed, the development process hadn't changed all that much. However, he conceded: "Major labels tend to want faster results. As an independent, as long as there was a growth, we would be happy to be doing three albums before there was a real breakthrough, as long as the audience was building, as long as sales were building, as long as the artist was developing, that's really the most important part. If the artist's developing musical vision is stagnant, that's a problem - that applies now as much as it did then."

Asked if there was one quality Miller looked for in an artist, in addition to the music, he replied: "The thing that links them is they are originals, they're not copying anybody else. They all have an exceptional vision. I think my taste is broader [now], but my standards are as high as they were.

Mute will celebrate its 40th anniversary in 2018, but Miller said that milestones mean little to him. "I'm not into anniversaries," he scoffed. "[We should] celebrate every day that we're making records."

Aside from A&R discussions, Midem's last day focused on two areas of potential growth for the music industry: YouTube and virtual reality. During the panel How to Build Your Video Strategy and Monetise your Video Content on Every Platform & Screen, speakers agreed that artists need to have a video strategy which does not simply consist of uploading videos on platforms such as YouTube, Vevo or Vimeo.

"The music industry and technology are part of the one same thing," said Scott Cohen, founder & VP International for digital distributor The Orchard. "Now, a video strategy is baked into the music strategy from the very conception of the music."

Romain Becker, director of video at indie digital distributor Believe Digital invited artists to look at YouTube creators and try to emulate them. The key, said Becker, is to constantly provide fans with new content.

"When we started we were offering our service to YouTube creators, and we eventually managed a few of them," he said. "When you look at their programming strategy, they understood that you have deliver content." His advice to artists was to look at this model and "build a community," as well as making collaborations.

Jordan McGarry, director of curation at Vimeo also focused on creativity. "We are talking about video strategy but just make sure you are doing content that is compelling," she said. "The best way to get people to watch [your content] is to make something amazing. The earlier you start thinking about you do the better it will be. Make sure that it is as strong as possible."

She also said that the key to monetisation was to target the super fans. "You can monetise the super fans and have them paying money for exclusive videos," she explained.

The world of Virtual Reality is still in its infancy but, as moderator Ted Cohen said in his introduction to the session The VR Music Experience: What You Need to Do to Make it Really Rock, the advent of VR will change the way people access content, but it will also require producers of music to adjust to the nature of VR content. Music will have to follow the users' moves. "The big challenge for the music industry will be to create in 3D audio," said Cohen. "We bring audio engineers on the set. All these things need to be planned out."

For Marc Scarpa, executive producer/director at Simplynew, VR is "a revolution." He suggested that, aside from the medium itself, what VR will allow is new forms of collaborative work between creators. "What is interesting is to have artists working together in the VR space and create together," he said. "These are the possibilities we need to look at."

That’s our last report from MIDEM 2016 – catch up on our coverage of Day 1, 2 and 3. Organisers Reed MIDEM have pledged the conference will return, despite another drop in attendance this year.