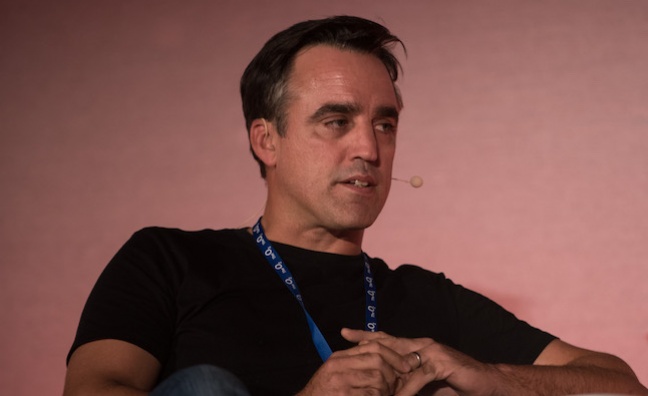 The Music Week Tech Summit Together With O2 is all about the intersection of the music business and technology, which is basically what Rian Liebenberg has been tasked with accelerating for Kobalt as it continues its revolution of music rights and recordings.

Just seven weeks into the job as CTO, Liebenberg was questioned on the big issues facing the biz during a keynote interview at The O2 with Music Week editor Mark Sutherland today (September 26). Kobalt was a partner for the Music Week Tech Summit.

“My God, isn’t it a complicated industry?” said Liebenberg. “The thing that’s been the biggest surprise is the lack of uniformity and standards around the data.”

Liebenberg, a former senior Google executive, said the need for real-time information for artists and writers was a “big challenge for the industry” - but he added that he has always been a “mission-driven” person.

A self-proclaimed ‘disruptor’, Liebenberg has now joined a music rights company that has specialised in disruptive behaviour. But not everyone’s a fan of the digital incomers to the music business.

Speaking from the audience, Kennedy Mensah, founder of publisher, Back 2 Da Future Music, said: “You’re a disruptor and you’ve disrupted our business. Your only new in the building. So how does it feel that us ‘dinosaurs’ don’t like you very much?”

There are many underserved regions where we can help creators

Liebenberg brushed that off during a keynote in which he hailed Kobalt’s “inspiring” approach to technology as “adding value”, including its publishing portal and further plans on the way.

“It seems to be the one business in the industry that is tackling this in a truly global scale,” he said. “This is a booming landscape and technology is at the heart of that. If you don’t understand it, how can you deliver the right products?”

In the US, Kobalt was No.2 publisher in Q2. For further growth, Liebenberg is looking further afield and has plans to seize on the “huge potential” of China, now a Top 10 IFPI market.

“I think the industry, given the lack of standardisation around data, is still fragmented when you think of the global reach,” he said. “There are many underserved regions where we can help creators. Growth is correlated to our ability to think about this in a global context.”

He described Spotify’s move to introduce free uploads to independent artists as “phenomenal” as a tool to reach 185 million users.

Liebenberg was also optimistic about the opportunity for the industry to return to the kinds of revenues seen in the ’90s.

“I can only see growth beyond that peak,” he said.