Official: Facebook partners with majors and indies on music videos 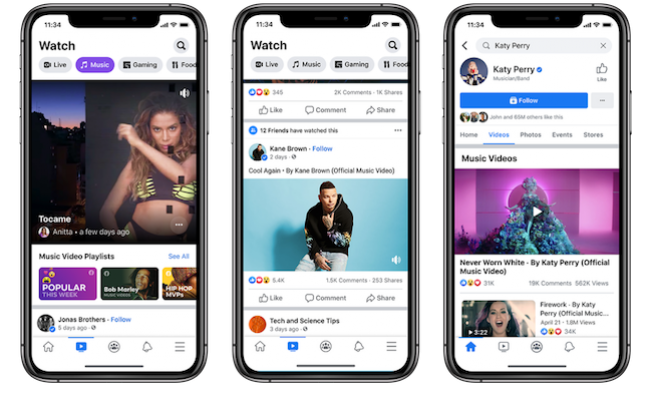 Facebook has agreed deals with major labels and indies to enable it to feature music videos.

Facebook said users in the US will now be able to share music videos from top artists and rising stars across various genres.

“With official music videos on Facebook, we’re creating new social experiences that are about more than just watching the videos,” said Tamara Hrivnak, VP of music business development and partnerships and Vijaye Raji, VP of entertainment in a blog post.

“We’ve been working with partners in India and Thailand to build the foundation of a music video experience on Facebook. Now we’re excited to launch in the US in partnership with Sony Music Group, Universal Music Group, Warner Music Group, Merlin (now headed by former Facebook exec Jeremy Sirota), BMG, Kobalt and many others across the independent music community, publishers and societies.”

Music has been licensed on Facebook for some time. The expansion into music videos has long been rumoured.

The social media network will be in direct competition with YouTube, which has been the dominant platform for music video. On YouTube, music videos are responsible for 25% of overall consumption, according to the Google-owned platform.

Facebook is launching a new destination for Music in Facebook Watch where users can explore music videos by genre, artist or mood, as well as themed playlists like Hip Hop MVPs, Trailblazers of Pop and Epic Dance Videos. Over time, the experience will become more personalised based on artists users follow and videos they engage with.

The Music destination in Facebook Watch is available on desktop and iOS and Android mobile devices starting today (July 31).

Despite reports of YouTube viewing booming during lockdown, music video streams are actually down 8.6% year-on-year, according to the Official Charts Company, while audio streams are up 18.4%.

Facebook and Instagram have both introduced features to monetise livestreams for artist during Covid-19. sister platform Instagram, already a giant in short-form video, is launching its TikTok-esque app, Reels.

Video advertising on music promos could be more lucrative for Facebook than other types of digital advertising. Short form video platform TikTok has been growing rapidly.