Overnight news from around the world: Monday, July 11 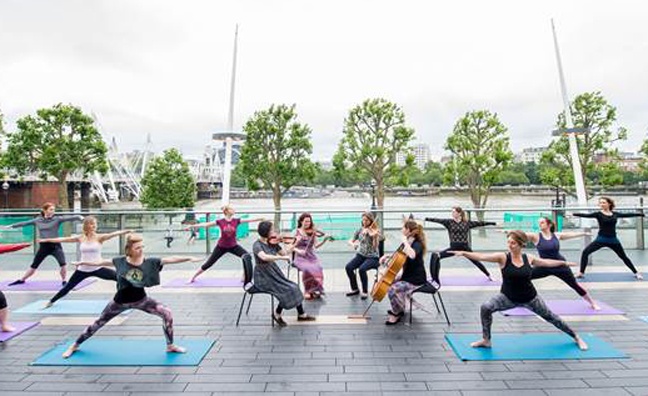 From September 23 to October 7 2016, the station will broadcast from a pop-up glass studio in the foyer of Royal Festival Hall, where visitors will be able to watch Radio 3 making and broadcasting their entire output over two weeks. The programme not only includes all of Radio 3's regular shows (e.g. Breakfast, In Tune, Late Junction) but some very special events including evening performances from Southbank Centre's Resident Orchestras' new seasons featuring classical music stars Nicola Benedetti, Vladmir Jurowski, Esa-Pekka Salonen; retro Tea Dances with a swing band reminiscent of the 1940s when the Third Programme launched; 'Classical Yoga (pictured) - outdoor yoga classes on the riverfront accompanied by live classical music and live events across the site including live poetry, a live radio drama about the creation of the Third Programme, live classical performances, and more.

The Guardian asks if this year's post-Glasto clean-up operation has been one of the worst ever, as work is still on-going at the festival site in Somerset nearly two weeks on from the event. A video has also emerged on YouTube, which has been viewed thousands of times and posted by a worker on the site, showing the state of the mess left behind by festival-goers and calling it "an insult to festival workers". (The Guardian)

BMG celebrates second UK No. 1 album in less than a month as Blink-182 top chart

BMG has secured a second number one album in less than a month, as Blink-182’s California debuts at the top spot in today’s official UK albums chart. California follows Rick Astley’s 50 to become BMG’s second UK No. 1 album in under a month. It is also BMG’s first multi-territory No. 1 album, topping the charts in both the UK and Australia. The band’s seventh album to date in a career spanning 21 years, California debuted at the top of the charts with sales of 23,529 copies (including 2,521 from streams). (Music Week)

In addition to scoring their first-ever UK No.1 last week, Blink-182's seventh album California has replaced Drake's Views as the No.1 album on the Billboard 200 chart with 186,000 equivalent album sales, with 172,000 from traditional album sales. (Billboard)

Blockchain technology could offer a fairer deal for musicians according to researchers from Middlesex University in a new report, Music On The Blockchain. In the report’s Foreword, Nick Mason from Pink Floyd said: “If blockchain technology can help the commercial and contractual relationships in music keep pace with technology and the communication between artists and fans then it could be truly revolutionary. This report is a valuable contribution and I hope it can help inform the debate and take us forward.”

In the new issue of Music Week, we take an in-depth look at the Q2 figures and highlights of all the key market trends and big sellers. Entertainment Intelligence’s Sammy Andrews takes the Big Interview slot and Blink-182 celebrate their first ever UK No.1 by talking to Music Week. There's also all the usual weekly charts and analysis. Subscribe here