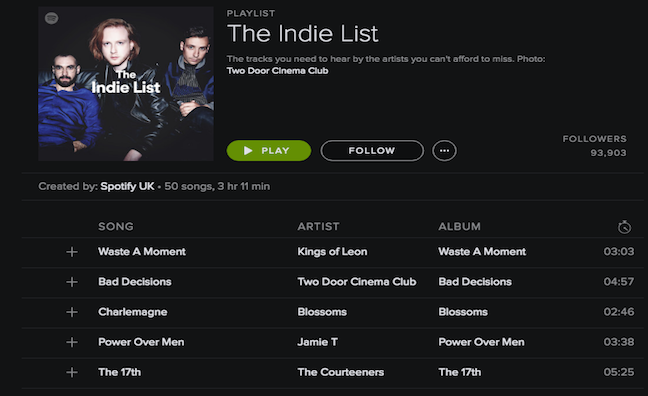 Playlists have overtaken albums as a format for music listening, according to a new study by LOOP (Lots of Online People) for Music Business Association (Music Biz) members.

The data comes from Music Consumption: The Overall Landscape – an in-depth report based on a May 2016 survey of 3,014 U.S. respondents. The report’s findings show that playlists accounted for 31% of total listening time across all demographics, while albums accounted for only 22%.

Single track listening remained the dominant format with 46% of total listening time, although that figure is down 6% from 2015, in which it accounted for 52% overall.

Elsewhere, the report found that YouTube has emerged as the most commonly used source for audio content, with 42% of respondents claiming that they used the platform to listen to audio for five minutes or more at least once a week.

Pandora was the second most regularly used source on the list with 31%, while CDs lagged behind at 22%.

The report also explored freemium streaming, revealing that 42% of respondents were not paying for streaming subscriptions because they were happy using ad-supported tiers.

“As the music business continues to grow and evolve, it is crucial that we understand the progression of music consumption trends so we can deliver the best experience possible,” said James Donio, president of Music Biz. “The data in this report will be invaluable to our members as they decide where, when and how to release and promote new music.”

“This report confirms that playlists are becoming more and more dominant in the music industry as streaming services gain traction,” added David Lewis, co-founder of LOOP. “We hope music companies will keep this data in mind as they make decisions on which platforms, distribution methods and marketing opportunities to invest in.”