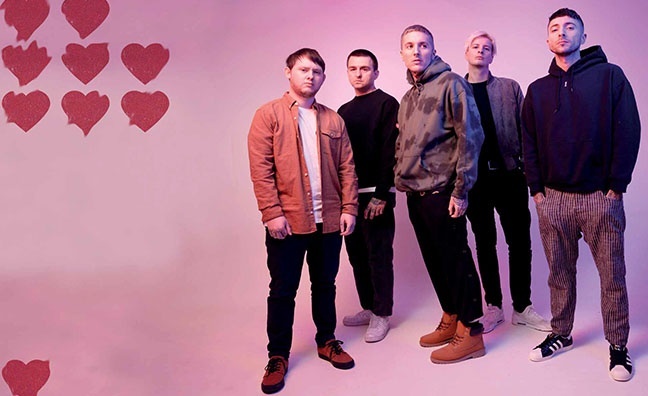 Who says rock music doesn’t stream? Not Music Week cover stars Bring Me The Horizon, who are out to prove the genre has a future on the format.

While previous Music Week research has shown that top hard rock streaming tracks are dominated by songs from the ‘70s, ‘80s and ‘90s, Bring Me The Horizon are one of the few modern heavy bands to make an impact on services such as Spotify and Apple Music.

The band has over four million monthly listeners on Spotify, where Mantra, the lead single from forthcoming sixth album Amo (RCA), has over 21.4 million streams to date. Meanwhile, 42.5% of 2015 album That’s The Spirit’s 235,916 sales to date came via streaming; a much higher proportion than for most rock albums.

The band – co-managed by Raw Power Management’s Craig Jennings and Matt Ash – star in this week’s Music Week, setting out their plan to infiltrate the mainstream with the new record, due for release on January 25. And things are already going well – lead single Mantra, which has sold 53,766 copies so far, according to the Official Charts Company, was a very rare hard rock track to be added to Spotify’s all-conquering Hot Hits UK playlist.

But the band told Music Week that other rock acts could have similar success – if they raise their songwriting game.

“In my opinion, it’s mostly shite,” he added. “The people who are writing the songs aren’t good enough songwriters. I don’t love the music on Hot Hits UK but they are well-written songs and that’s something a lot of rock bands don’t appreciate. The craft of writing good songs is hard.”

“Any of these bands could write a big song but it means they’re just going to have to keep going and be so honest with themselves that it hurts,” agreed frontman Oli Sykes. “The amount of times you have to turn around and go, ‘This is dogshit’ when you’ve been working on it for six days… We could have half-written all these songs and then gone to see a producer, hoping he was going to sort them out. But one of the important things about being a rock band is that you do write your own music.

“It’s not a very rock thing to have people writing your songs or your lyrics for you,” Sykes added. “I don’t think there’s anything wrong with having a little bit of help, or some outside perspective, but a lot of our contemporaries now just have people straight-up writing songs for them. I find that bonkers.”

Matt Ash told Music Week that Bring Me The Horizon’s unique sound – which sees them collaborating with the likes of Grimes, Dani Filth and beatboxer Rahzel on the new album – was helping them stand out at streaming services.

“We’ve had a lot of support,” said the Los Angeles-based RPM director. “It’s definitely getting outside of that niche rock playlisting world, which is something that we’re striving to do. I think with the record that they’ve made we can absolutely do that.”

The band wrap their current UK arena tour with two dates at London's Alexandra Palace on Thursday and Friday.

For the full, exclusive Bring Me The Horizon story – including interviews with the full band, plus RCA’s David Dollimore and the Raw Power team – see this week’s print edition of Music Week or click here. To subscribe and never miss a vital music biz story, click here.