TuneCore CEO Andreea Gleeson on how DIY artists are building audiences on TikTok, Twitch and Peloton 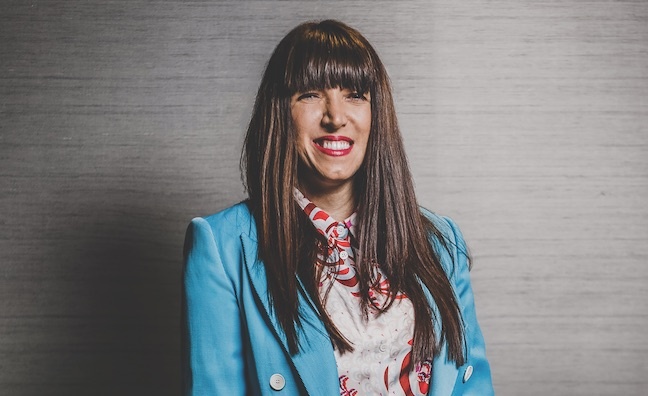 TuneCore has started 2022 with a Top 5 single from self-releasing artist Lauren Spencer-Smith.

The viral TikTok hit Fingers Crossed has peaked at No.4 and has sales to date of 59,541, according to the Official Charts Company.

“Lauren Spencer-Smith’s rocket-like trajectory is an example of what can happen when artists use social media to their advantage,” said TuneCore CEO Andreea Gleeson.

The DIY digital music distributor has increased its profile thanks to media coverage of the single by the 18-year-old former American Idol contestant.

It follows the launch of TuneCore’s Social Platforms service to help artists distribute to TikTok and other apps ahead of a wider release roll-out. Spencer-Smith released the song directly into TikTok’s library through TuneCore’s tool.

On the OCC independent singles chart, TuneCore has the No.1 track with Fingers Crossed and No.3 single Eazy by The Game feat. Kanye West (No.32 singles chart peak, 12,608 sales to date). Those two chart appearances show the range of artists TuneCore is supporting in the streaming economy.

With DIY artists’ streams growing ahead of the overall market, Andreea Gleeson talks Music Week through their plans to help music creators build audiences on TikTok, Twitch and Peloton…

TuneCore recently launched Social Platforms for TikTok and other services - what’s the thinking behind it?

“Something that I kept seeing for our artists is just how much more of an impact social media has been having on their access to fans directly, and also in their release strategies. Influencers are finding a song and really connecting with it. We're separating out the social platforms as a pre-step to distribution, so artists can experiment. If you get a song into the libraries, it makes it that much more likely for some of these influencers and the fans to start using it in their own videos more easily.”

How important is TikTok as a platform for independent music?

“It’s really becoming how music is discovered. What's fantastic is that it's just such a levelling of the playing field for musicians. It's a way for independent artists to really connect with fans directly. And the audiences love finding it, they're having a virtual experience because they found this thing that isn't mainstream. So we want to lean into this, we want to make it easier for the artists to upload songs to these platforms, and then let them start making money from it from the beginning.”

Does it work for all artists?

“You've got to find what makes sense for you - doing a dance challenge may not be what makes sense for you. I'm a very big believer in an artist seeing if their community is there, but they should do the same thing with Instagram Reels and YouTube Shorts. They should see if they can find a community on Twitch. It can be overwhelming, and this is why I think education becomes really key. We're making sure that with everything we're doing, we're also adding in the education and help to guide artists.”

TikTok is really becoming how music is discovered

There’s an ongoing debate about artists’ earnings from streaming - is one solution to self-release?

“Well, I think everyone's getting smarter about owning their masters. There will be more artists like Russ, who has done both - he grew independently, went on a label deal then came back to being independent. TuneCore's a partner with [parent company] Believe, and what believe does is fantastic, having that network  for doing all the playlist pitching globally. It just really depends on who you are as an artist, what makes sense for you - is it better for you to do it independently and hire your own team or to work with somebody like Believe? I’m probably a little bit biased, but I don't think the major labels have quite modernised to the digital landscape yet. Artists are now more involved in the negotiation process, they're making those decisions of what makes sense for them. We're just excited to give them more options that are more artist-friendly.”

What are the opportunities for building communities around livestreams?

“We just launched our partnership with Twitch, and they're doing it the right way by adding in an incubator, because artists need some guidance at the beginning. It's tapping into this very avid community. What I think is so interesting is that there may be some artists who don't have very high streaming income, but they have this huge following on Twitch and you can make very meaningful money. We're all about how do we help artists harness new technology, find their audiences and be able to make money? And that might be different for each artist.”

How does that audience reach work with a fitness app like Peleton?

“We just launched our distribution to Peloton [in October 2021]. Because we also have the publishing side of the business, we work very closely with our team to get our DIY artists’ music into the classes. The music is available to the instructors to pick. I have a Peloton at home, it's actually really cool. You're in the class, and the song that's playing shows up on your screen. And if you like it, you ‘heart’ it and it saves it to your music, so you can hook up either your Apple or Spotify account to be synced with your Peloton and it shows up in a playlist for yourself. They can easily go and explore the rest of the artist’s catalogue and it becomes a very exciting and interesting way for music discovery in a way that wasn't expected. I was a marathon runner for many years and there's nothing like hearing an awesome song to help you get through those moments when you need to push through, and so the connection between exercise and music is so closely tied. Peloton is really innovating in a way to digitise how music is incorporated in a virtual world of exercise.”

Self-releasing artists have been outperforming market streaming growth - how is TuneCore part of the trend?

“The study that came out in March [2021] showed that the DIY artist sector grew 34% compared to 7% for the overall music industry. We actually outpaced that growth rate last year. So it's about making sure that, as the opportunities are evolving in the music space, we are working alongside those innovators to make sure we are building opportunities for the DIY artists and providing education.”

“We're going to do a complete overhaul on that user experience to be more modern and inspiring. When you're working with musicians, you want to be a place that's inspiring. So we’re having a relaunch of the site to modernise it. In the beginning of the summer, we launched a tool for cover art. Back in March, we launched our rewards programme, where we added in a lot of master classes from music industry experts. We want to help guide artists because it is overwhelming for [DIY] artists. Artists have to be their own entertainment lawyer, their own social media manager and their own tour manager. So we want to cut out some of that guesswork and bring industry experts in to do these education series. We definitely want to modernise how we're building access for independent artists in these spaces that are expanding and experimenting. It is very early with NFTs, but we're there in those conversations and finding what is the right solution that we feel can be really meaningful for our artists.”

What are your international ambitions?

“Last year, we expanded a lot internationally. We now have operations in 14 countries across five continents. We more than doubled the team. What we have been doing ahead of adding more people is also doing a lot of new languages on the website. So while we don't have local operations in Poland yet, we did translate the website into Polish to make it available in that language. So right now on the website, we have 15 languages and we have seven currencies. We are operationalising and optimising what we've done, and then have plans for some of the areas where we're seeing additional growth.”

How did your recent report into the challenges faced by women music creators help to make a difference?

“The study that we did with MIDiA was the first step in getting the research out there and creating awareness. For those of us that are working in the DIY artists sector, we have an opportunity where we can maybe lead the way. The power is going to be in coming together and starting to put some meaningful programming together to help make a difference. You have to walk the walk as a company, it's about helping support women and gender minorities. The first step that we started with is creating more access to resources and opportunities. We're going to do the study again, we want to make it annual and our goal is to include more companies in helping us figure out what we need to learn next.”