'A huge cultural moment': How Stormzy and his creative team triumphed at Glastonbury 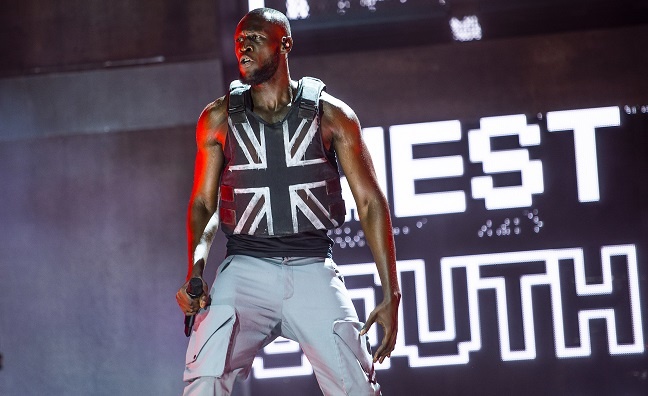 It was the most iconic set of the summer, but the seeds for Stormzy’s history-making Glastonbury headline bow were sown two years earlier.

Fresh from dropping his debut (and as yet only) studio album Gang Signs & Prayer (404,290 sales, OCC), the grime MC conquered the festival’s Other Stage in 2017, winning friends and influencing one very important person in particular.

“That’s when Emily Eavis first saw Stormzy and thought, ‘Wow! This guy doesn’t just bring it to the table musically, but has a stage presence and production that backs it all up’,” reveals Chris “Bronski” Jablonski, who runs creative house Tawbox with choreographer Amber Rimell.

Tawbox has teamed with the BRIT Award winner, who is repped on the live circuit by Primary Talent’s Craig D’Souza, since 2016.

“Glastonbury was almost the three-year anniversary of us working with Stormzy,” recalls Bronski, whose other clients include Dave, AJ Tracey, Rita Ora and Post Malone. “We helped him out three years ago just to help beef up the show a little bit. Then Gang Signs & Prayer came out and when he announced his [spring 2017] tour, with three nights at O2 Academy Brixton, he trusted us to push the boundaries. So we really went to town.

The first black British solo artist to headline Glastonbury, Stormzy’s live activity in the UK over the past couple of years has been limited to select high-profile shows, including a headline concert at Wireless 2018.

“That was a big milestone for him,” says Bronski. “Originally that was his big thing – to headline Wireless Festival – and we believe Wireless helped lead to getting booked onto the Pyramid Stage and we were always going to do something special for that, without a shadow of a doubt.”

Announced last November via posters placed in Oxfam shops, the Glastonbury headline slot was more than six months in the making.

“It was very clear to Stormzy and to us that the performance had to be a celebration of where he’s from,” notes Bronski. “Not just geographically, but culturally as well.

“His Wireless Festival set last year had a very different crowd and we treated it very differently. This had to be broader. It had to be more accessible to a larger crowd, but also true to him and I feel like we got that balance as right as we could have.”

Multiple elements of the show, from Stormzy’s Banksy-designed Union Jack stab-proof vest to the sublime Black Ballet interlude, already feel iconic just two months on. But Bronski remains tight-lipped about the origins of the opening video, which featured Stormzy in conversation with Jay-Z.

“There’s only so much I can say about that,” he grins. “There was a big element of wanting to start the show on the right foot and that Jay-Z video was perfect, especially because it mentioned culture.

“The video was from last year and Stormzy was adamant about using it quite early on, so it was something we’d always had in our minds. It led perfectly into the first part of the show, which was very much along the lines of what you’d expect from him – hard-hitting, relentless and powerful.”

“My career is nothing but varied,” he laughs.

Routledge was the lead lighting programmer for the London 2012 Olympics opening and closing ceremonies, so when he likens Stormzy headlining Glastonbury to one of the nation’s greatest recent triumphs, his words carry weight.

“I had the same feeling going into that show as I did when I was operating the lights on the London Olympics,” he tells Music Week. “People were hating on it a little bit at first, asking, ‘Why is he doing Glastonbury?’ in the same way that they’d been saying, ‘Why is London hosting the Olympics?’ But I knew we had something special, so there was this tingle of nervous excitement.”

Routledge has previously worked on tours by the likes of Beyoncé, Sam Smith and Take That.

“I’m blessed to be involved with artists that want to push things forward and do something new,” he explains. “It’s not always about doing something new technologically, but creating a performance that people actually feel.

“It wasn’t until the Monday before [Glastonbury] that we really started piecing it together. Stormzy was absolutely buzzing when he saw what had been built. He was just going to rehearse two numbers, but he was so gassed with the whole thing so we just didn’t stop rehearsing.”

Routledge describes how the Pyramid Stage’s unique make-up presents its own problems.

“It’s quite an unusual structure so we have to design around what is feasible,” he says. “But we pushed what is possible in a changeover past what anyone has ever attempted before.”

One of the most difficult tasks, he adds, was building the set within 45 minutes of previous act George Ezra coming off stage.

“That was a mission and a half,” he chuckles. “We had to dismantle the entire upstage large video screen and take out some of the lighting rig before we even started building, so there was a lot of nervous energy. But we knew that, as soon as that was good, we had an awesome show.

“There were markers: the first section was heavy grime – dark, with a fierce intensity – and then we lightened it up with some R&B. We hit milestones throughout the show and then filled in the gaps in between. There are so many moments that gave me goose pimples and I think it was the same for the crowd.”

One such moment was the moving first interlude, featuring dancers from London-based ballet company Ballet Black, which left an indelible impression. Tawbox choreographer Amber Rimell talks through its inspiration.

“There had been a BBC report in November 2018 about how Ballet Black had collaborated with [shoe manufacturer] Freed to make sure that ballet shoes were made in all skin tones,” she says. “Stormzy is very much involved in the creative process. He was very aware of Ballet Black and suggested he would like to include ballet in the performance.”

“The switch to ballet was so harsh, but so beautiful,” smiles Routledge. “No one was expecting something like that.”

“I feel like that’s the first moment in the show where people realised they were getting something deeper than just a straight up performance,” nods Bronski. “Stormzy was adamant that the whole show should have meaning. Our reference points were South London, black culture, church, the youth and gangs. We used all of those elements to create something that moved in a structured way: the hard-hitting Stormzy into the live music Stormzy, with a slightly softer touch, into the more theatrical Stormzy and then the most modest Stormzy. He is the most beautiful, warm, humble person, so that moment was amazing.”

The 26-year-old, whose Glastonbury debut came on the less heralded Sonic Stage in 2016, was joined by a multitude of special guests at Pilton including Chris Martin, Dave and Fredo, and made sure to name-check scores of his urban comtemporaries.

“He was adamant on wanting to share the stage in more ways than one,” says Bronski. “Not just in terms of additional performers, but also the fact that he listed the names of other up-and-coming artists within his genre.

“We all knew we were creating something that Glastonbury had never seen before, certainly not from a Pyramid Stage headliner. We knew it was going to be something special, but what we didn’t expect was how it would be picked up globally. The world grasped onto it and has taken it as a huge cultural moment.”

Naturally, Bronski’s mind is already awash with possibilities around what Big Mike comes up with next.

“That will very much come down to the music and the message,” he concludes, adding: “We will always try to be unique.”