Back to life: Amy Lee on Evanescence's first album in six years 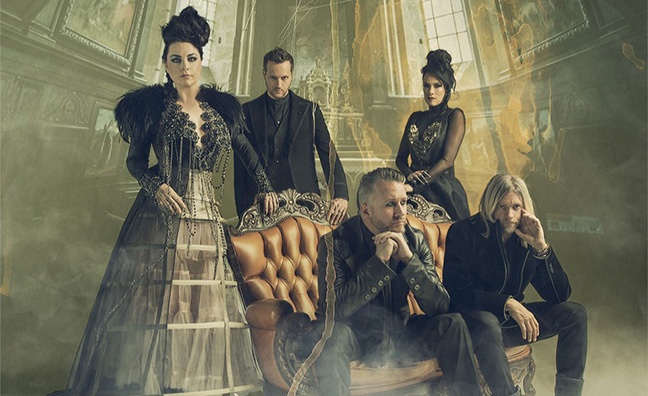 Multi-platinum rock outfit Evanescence are back with a new album reinterpreting their back catalogue with an orchestra in tow. Music Week speaks to singer Amy Lee and the team behind the project to get the inside story of their boldest move yet...

Amy Lee is impersonating what happens when people in mainstream audiences hear the name Evanescence in 2017.

"Oh, goth girl falling off a building?" she deadpans to Music Week. "Yeah, sure, I heard that."

She is, of course, referencing her appearance in the video to the 2003 single Bring Me To Life that catapulted the Arkansas nu-metal band - and Lee in particular – into overnight, multi-platinum selling fame. To the world at large, it's a song and a video that still defines the band, yet doesn't really tell the whole story.

A far cry from her guarded, running-mascara goth image, Lee is all smiles today as she sits in Sony's UK offices, sporting a bright blue dress. Likewise, musically, Evanescence have evolved over the course of a career that few of their vocal critics would have predicted after their breakthrough album Fallen. It has sold 1,324,026 copies to date in the UK according to Official Charts Company data.

Amazingly, they still only have two other studio albums – 2006 The Open Door (350,752) and 2011's self-titled release (112,991). Ever since the latter, fans have been wondering where the follow-up was, as Lee took time to raise her child, soundtrack a film and even release a children's lullaby album.

We're here today because said album has finally materialised. Kind of. Synthesis is an album that sees Evanescence - completed by bassist Tim McCord, drummer Will Hunt and guitarists Troy McLawhorn and Jen Majura - release new material alongside re-recordings of some of their most defining songs, all with orchestral accompaniment.

It makes sense to start by asking Lee why now was the right time to take on a bold endeavour such as this, rather than release the brand new album fans have been pining for?

“I don’t know about the right time as far as the outside world is concerned," smiles Lee. "For me, I genuinely always have to go for what I feel inspired to do, there’s not a big plot to it other than it was something I was excited about.”

Indeed, Lee correctly stresses that their music always had that side, citing the battle to make sure their songs always had real strings and not synthesisers as one of the “big first fights” she won in her career.

“How can we take that history and honour it, but lift it up to a new level?” is the question Lee says they asked themselves in the studio. “Getting in a full orchestra with woodwind, horns and percussion, plus mixing it with electronics is next level.”

More than a stopgap affair, Lee is adamant that Synthesis has a very real reason for existing.

“There’s a lot of musical skill that I personally didn’t have,” she explains. “When we were writing Bring Me To Life I was 19! So just the musical ability that I had when I was 19 as a writer, as a singer, as an everything, I can do all that stuff better now because we’ve had all this time and experience. In addition, living inside those songs live for all these years, it just forever gives you ideas.”

That Synthesis – certainly a bold artistic statement – even exists is a testament not only to Lee’s musical ability, but also her tenacity.

She has not had the easiest of rides in the industry. A whirlwind encounter with fame, fending off accusations of being a one-hit wonder, a revolving-door line-up that saw her main songwriting partner Ben Moody exit in 2003 and a protracted beef with her label Wind-Up.

How can we take our history and honour it, but lift it up to a new level? Getting in a full orchestra with woodwind, horns and percussion, plus mixing it with electronics is next level...

Far from battle-weathered, however, Lee seems energised by her return to the music world. For one, she's not daunted by the blockbusting success of her past.

"Fallen happened in the way that it happened," she shrugs. "You can’t even talk about record sales any more, it doesn’t mean anything but we kind of got set in a way that I was okay. We made some money and I always have poured that money into the next project. I have this ability to use that resource and the fanbase that we got from all those people who heard our music in the first place and cared about it enough to stick around.  I can use that, I don’t have to start [a project] by going, ‘Help! I need to do a Kickstarter! I need to find a label!"

In terms of being reintroduced to audiences, Evanescence are in good hands, joining RCA UK’s diverse roster alongside Paloma Faith, Beyoncé, Bring Me The Horizon, Jeff Lynne’s ELO, Nothing But Thieves, Zayn, HMLTD, SZA and more.

"For me personally, I was in a very long relationship with my label which had become toxic and it had become very difficult to work," says Lee. "At the end of it, it was very much time to move on. Once I got free from that finally, my whole world really opened up. Nothing really had to be a fight any more, I had a lot of control.”

It is perhaps understandable, then, that for this release, Evanescence explored their options before settling on a territory-specific deal that gave Lee “complete creative control”.

It made a lot of sense both to the band and theirmanagement team.

“The notion that one global label deal can deliver results seems to be 20th century thinking,” says Evanescence's manager Jordan Berliant of Revelation Management. “The days of record corporations making something a global priority have long gone. As digital media expands and becomes more niche, it’s important to have partners in each part of the world that understand what works best in their region. Additionally, the internal economic structure of multi-national labels don’t fully incentivise efforts being made in international territories. It’s always better to be a domestic artist on a label so that’s what we achieved by doing uncrossed deals in each territory. We’ve been doing it this way for many years with artists who are fortunate enough to control their own rights.

"Essentially, we cut out the middle man and replace it with ourselves," Berliant continues. "It’s a lot more work for us as managers to coordinate these campaigns across the world but the results are worth the effort. We feel we have the best partners in each territory to create bespoke, innovative campaigns with us.”

When it comes to Evanescence's long-overdue comeback, RCA senior marketing manager Martin Harris is quick to stress that in many ways they haven't gone away.

Not only only have they retained a place in wider pop culture with hits like Bring Me To Life and My Immortal being played on X Factor, Harris also notes that their music is, “extremely reactive and continues to pervade charts across DSPs following exposure on these media platforms.”

“As with any artists that are returning after any time away from the spotlight, the biggest challenge we often face is introducing the artist to the streaming world,” says Harris. “With any returning artist, the key is to re-engage the audiences in that world as quickly as possible, given the inclusion of streams in the album chart.

Fortunately, Evanescence have a reliably strong UK fanbase who have supported the band from day one so we were able to engage them with the launch of the D2C store and ticket bundles.”

Indeed, despite the fact that Evanescence have only produced three studio albums in 14 years, said fans have remained loyal. Amy Lee believes they will always come back. And she's not ruling out converting new ones, too.

“We have millions of fans who understand us," Lee smiles. "Everyday is another chance to prove ourselves to ourselves, challenge ourselves and be better at what we do. I know that we still get new fans all the time, I know that we earn that and part of the way that you earn that is just staying true to yourself, playing concerts, doing the best that you can possibly do. It’s never too late to change somebody’s mind.”