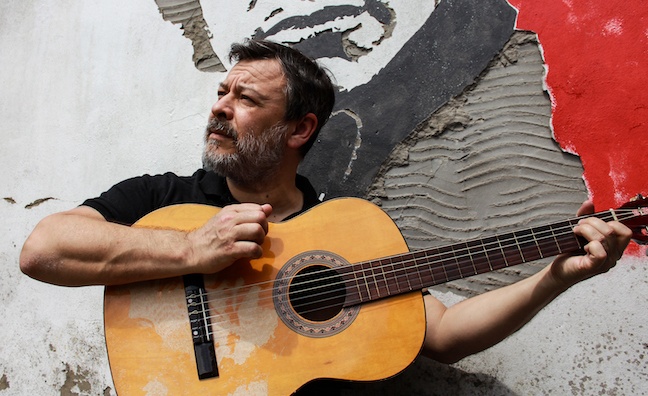 Fourteen years since his first solo LP, James Dean Bradfield is back with his second, Even In Exile. Here, the Manic Street Preachers singer chews the fat on his legendary band, the upside of major labels and why the album still matters...

Rob Stringer has a lot on his plate, but he’ll always find time for the Manic Street Preachers.

The Sony Music CEO signed the Manics in 1991 while at Sony UK and remains one of their closest confidants. “We still send him all our new stuff,” James Dean Bradfield, the Columbia mainstays’ singer and guitarist, tells Music Week. “When people moan about being on a major label and being controlled, well, our experience was the exact opposite.”

The 51-year-old cites Stringer’s influence on the marketing campaign for the Welsh group’s seminal 1994 LP The Holy Bible (250,121 sales, OCC) as a case in point. “It was his idea for the centre-spread advert in the NME to be all the lyrics from the album,” marvels Bradfield. “So it is a bit confusing for us when other people have such bad experiences on major labels, because we had an amazing experience and were artistically free. They believed in us and that was all down to Rob.”

Bradfield is in promo mode for his imminent second solo record, Even In Exile – a collection of 11 songs tracing the life and death of Chilean poet, folk singer and political activist Victor Jara. “I’ve asked [Stringer’s] opinion on some of this stuff, whilst knowing that perhaps talking to somebody like Jay-Z might be a bit more appropriate for him these days than listening to one of my songs about Victor Jara,” laughs Bradfield. “But he still comes back, he still gives his opinion and he still has input.”

Even In Exile drops on Bradfield’s Montyray imprint via Sony’s The Orchard on August 14. “We’re super-excited to work with James and his team on his second solo album in the UK and internationally,” says The Orchard’s senior artist marketing manager Adam Saunders. “It’s been a pleasure to work with an artist who’s so hardworking and principled.”

Keeping it in the family, as it were, the record’s lyrics were provided by poet and playwright Patrick Jones – brother of Manics bassist and wordsmith Nicky Wire. “I have this routine where I go up the Valleys every Sunday to see my dad and then, on the way back, I see Patrick,” explains Bradfield. “He always shows me what he’s writing, and Patrick was writing reams and reams about Victor Jara.

“I started getting into this prose and the poems – there was even a little one-man play. I said, ‘I’ll give it a go of trying to turn it into an album if you don’t mind?’ And within two weeks of him showing me this stuff, I’d started two songs.”

Jara, who was killed days after the 1973 military coup led by Chilean dictator General Pinochet, has been namechecked in songs by the likes of The Clash, Simple Minds and Calexico, and is celebrated at commemorative events to this day. “He’s a voice that reverberates down the decades, it’s quite unbelievable,” notes Bradfield. “Jeremy Corbyn quoted Victor Jara on the eve of the last general election, which obviously didn’t end well. I hope that’s not a portent for my record!”

While the impetus for Bradfield’s second solo LP was the same as his first (“Nick and Sean [Moore, drummer] saying that we had to take a break”), the broader circumstances are very different: 2006’s The Great Western (28,333 sales) came out in the midst of a commercial and creative slump for the Manics in the wake of 2004’s divisive Lifeblood (85,148 sales). The hiatus, which also spawned Wire’s maiden solo effort I Killed The Zeitgeist (5,671 sales), revitalised the trio, paving the way for 2007’s triumphant Send Away The Tigers (179,623 sales).

“After Lifeblood, we knew we’d lost our way a tiny bit,” concedes Bradfield. “We’d internalised everything too much and become a bit too questioning. We were just suffering from large doses of paralysis through analysis really, so we took a break and that space gave us a good opportunity to reboot.

“Nick used an analogy about having to reconnect – you can’t reconnect with your audience if you can’t reconnect with what you originally were – and I understood that,” he continues. “So we went back to that guitar-driven, anthemic rock that still had undercurrents of punk and rock classicism, with a strong pop conscience and an ability to write about politics and not make it seem dogmatic.”

Five acclaimed studio albums later, the Manics are bulletproof rock royalty, but face the same hurdle as any seasoned band in adapting to the streaming age – 79% of the 55,247 sales of their most recent LP, 2018’s Resistance Is Futile, were physical. “I’m a bit too old to be converted to anything without seeming like I’m desperate to be ‘trendy’, as one of my uncles would say,” chuckles Bradfield. “But I understand the convenience, so I’ve come around to streaming to a certain degree.

“I just don’t want to moan about things anymore. I don’t want to moan about how I’ve lost the tactility of what a record sleeve is – it’s gone and it isn’t coming back. I can still enjoy that and lots of other blokes over 50 can enjoy it, and grow a beard and get a tote bag too, so we can live our lives the way we want to. But we can’t expect new generations to be into what we had because it just isn’t going to happen.”

The Manics’ underrated sophomore record Gold Against The Soul (176,538 sales) received the deluxe reissue treatment in June, charting at No.17, prompting a reappraisal from Bradfield. “Nick is in charge of the archive, so whenever he works on a reissue, it’s so completist, it’s really worth buying,” remarks the frontman. “Gold Against The Soul was a bit of a classic second album. After the initial rush of feeling indestructible and nihilistically bang on message with the first album, a lot of bands lose their way with their second and we did a tiny bit. But that doesn’t make it any less interesting.”

Bradfield is marking Even In Exile with a three-part podcast, Inspired By Jara, but plays down his expectations for the project as a whole. “To get in the Top 10 would be nice,” he smiles. “We all know that, with singers that have been in bands forever, the brand loyalty is not always there when they go solo, so I don’t expect every Manics fan to go and buy it! But if, through my record, people could investigate the way Victor Jara dealt with issues in society and political landscapes, and the way he tried to make people compromise and at least respect each other, I’d be very happy.”

In closing, the conversation inevitably returns to the Manics, whose 14th long-player is scheduled for 2021. “It’s subject to change, like everything,” suggests Bradfield, wearily. “We’ve started demoing and hopefully myself, Nick and Sean are going to be in the same studio space together soon.

“No matter how much the shape of the industry tries to diminish the form of the album, and the way people consume music diminishes what it is – to the very bones of its existence – we still have a belief in it. The one thing that gives a band ambition, scope and purpose is to try and create an album, to create a narrative, to create something that has a shape and a form beyond one song. I know we’re still thinking like that, so it excites me that we’re quite resistant to that kind of change. The album is still what defines a band.”