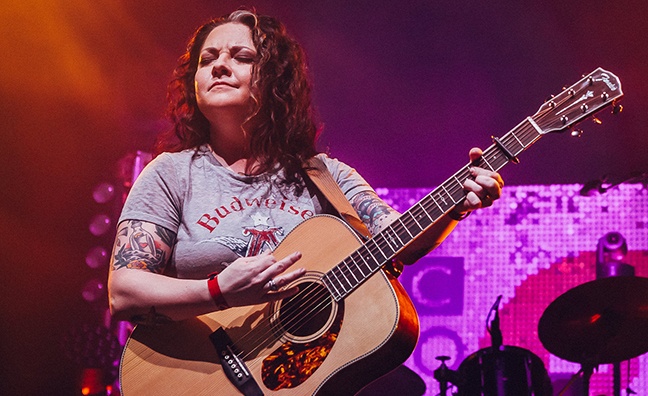 Before scoring her big breakthrough in 2018, Ashley McBryde had to spend a long time turning out naysayers. Ahead of the release of her brilliant new album Never Will, Music Week joins the star, Q Prime Management and Warner UK to discover how she's found success on her own terms...

Life’s been moving pretty quickly for Ashley McBryde these past few years. Scrap that. Extremely quickly. So much so, she recently sought help to process everything going on in her career.

“I had two options, I could try and do this in a healthy way or… It was hookers and blow,” she laughs as Music Week interupts her afternoon of songwriting in Nashville. “Those were the two options.”

It’s a statement that not only characterises McBryde’s personality, but also her songwriting: a charming mixture of sensitivity and razor-sharp wit that’s made her one of modern country’s most important voices. In 2018, McBryde released her major label debut Girl Going Nowhere via Warner, a “life-changing record” that earned her New Artist Of The Year at the CMA Awards and two Grammy nods, as well as the chance to cross the Atlantic for C2C.

When she appeared on the Spotlight Stage in 2018 – holding the cavernous O2 Arena in her hands during a short acoustic set – it passed instantly into C2C lore. The following year, she was back on the main stage. Now, in 2020, she returns for a nine-date headline UK and Ireland tour, including a stop at London’s Roundhouse. For clarity: prior to this, the Arkansas native had never even travelled on a plane before.

“It’s been a whirlwind,” she explains. “And there’s not a lot of opportunity while you’re inside it to grasp what’s happening to you. I don’t know if this will sound clichéd or dramatic, but I got a therapist. I want to make sure that I get to sit down with somebody and really talk about all of the things that are happening. Some of it’s hard to deal with, some of it moves so fast that you get anxious. For a while I got sick and just couldn’t get better; it’s because my body just didn’t know how to adjust. I chose a counsellor to help me absorb everything that’s going to happen in my career correctly, and in a healthy way.”

It sounds like good preparation as she readies the release of Girl Going Nowhere’s eagerly-anticipated follow-up Never Will, due on April 3. It’s a record with a lot to live up to.

“I tried as much as I could to remove the pressure,” says McBryde. “I think if you go in with accolades in mind, then you’re already screwed. But when your only goal is to write cool music, put it together in a cool way, and perform it with a cool band, you can’t lose.”

On the one hand, Never Will reaffirms McBryde’s inherent coolness, something long associated with her public persona ever since Eric Church christened her a “whiskey drinking badass”. Today she stresses she no longer downs shots with fans before her sets. “I am a whiskey drinking badass, but no-one can do 16 shots before a show,” she grins. Yet this record confirms much more besides with McBryde’s manager, John Peets of Q Prime, telling Music Week, “Her observations of life, loss and the human condition are on the level of our greatest poets and authors.”

Look no further than Stone –.an elegiac track co-written with Nicolette Hayford that details McBryde’s grief over her late brother.

“If I’m going to get to do music on this level and get to reach the ears we’re getting to reach, then you have to reach deeper; you have to be more naked in front of the audience,” begins McBryde. “I’m not the only one that has a dead brother. My co-writer, Nicolette Hayford, her brother’s been gone for a couple of years. I said, ‘If anyone’s going to write a song for dead siblings or suicide, it’s going to be us.’”

McBryde outlines the long and “super-therapeutic” session that produced the song.

“Neither of us will even write anything down on paper until somebody cries,” she continues. “That’s just the way we write together. As soon as she saw an exposed bone she just jumped on it like a junkyard dog and was like, ‘Grab your guitar!’ And that was it, we’re laughing, crying and angry, and start letting it fall onto the paper.”

While beautiful songs like Stone take us deeper into McBryde’s life than ever before, there remains at the heart of this album the same spirit of defiance that charges all her music. The title-track, for one, showcases McBryde’s refusal to listen to her detractors.

“When you first set up to do this, somebody says, ‘You’re never going to be able to do it,’ and then you do it,” she reflects. “And then after that, they go, ‘Well, it’s not going to last very long’. Then you get the success you’re looking for, and they say, ‘Even if you get it, it’s just going to change you as a person’. It’s nothing but trolls and people trying to naysay anything they can. You can’t let it enter your creative space so, as a band to each other, and our listeners, we promised that we don’t, and never will, listen.”

This headspace has been hard won for McBryde, who started out as an independent artist, one who self-released two albums. She has previously admitted that, in her early days, she tried to “play the game”. Music Week wonders what that entailed…

“People close to me that I worked with on a daily basis were saying, ‘You should be running twice a day,’” she sighs. “If I had time to run twice a day I still wouldn’t, because I hate to run. Of course, I want to be healthy, but at the time I wasn’t any bigger than a twig anyway and they were still trying to have me lose X amount of weight, because, ‘If we’re going to take photos, the camera’s going to put that weight back.’ And, ‘We love your curly hair, but it’s too curly – can we put our own curls in?’ I was like, ‘OK, I’ll try anything.’”

The requests kept on coming.

“And then it’s, ‘Well, we have to have radio friendly songs…’ So we did that and luckily it did not result in a record deal. Even though I was still being true to myself playing live shows, I had agreed to try anything once. I knew I liked my hair better curly and that I don’t have to be skinny to be successful. That would have been an impossible facade to keep up. I don’t ever want some young man or young girl to look at me on a screen and go, ‘I could never be that because I’ll never look like that.’ That would break my heart. I’m 5’3” and I weigh 170 pounds. If anyone has something to say about that, they can stand toe-to-toe with me and say it to me.”

“I went to a showcase-type show at a small bar in Nashville, and two songs in I turned to a few people I brought from my office and said, ‘We’re doing this… If she’ll have us,’” he tells Music Week. “I went to meet her after the show. As she tells it, I walked in, introduced myself and said, ‘I love what you do and I know what to do with it…’ and then walked out. Hopefully, I wasn’t that rude, but I will agree that my passion and clarity levels were certainly that high.”

“My guiding management principle is always the same,” says Peets. “It’s to create an environment in which the artist can realise his or her full potential and artistic gifts. We work to understand that vision and create the lens in which all the business extensions walk, talk and look like a reflection of that core artistic individualism. Commercial success may or may not follow, but good work is almost always achieved.”

For McBryde, success has certainly followed and, interestingly, it has blossomed in a country music industry that has so often proven to be institutionally biased against female talent, particularly on radio.

“I’m not downtalking any of my male counterparts because I love them, and I love touring with them,” says McBryde. “But male artists can grow a beard, throw a ball cap on and that’s what’s ‘in’. We can’t do that. If we threw a ball cap on, we’d be considered frauds. It’s a disproportionate amount of expectation.”

McBryde proceeds to recount her own personal experiences as a female artist.

“When I first started doing a radio tour, I thought about the horror stories about the imbalance and was like, ‘Surely it’s not that bad? It can’t be that bad!’ she pauses. “It is definitely that bad. It’s: ‘If you have a beard and a ball cap, here’s your record deal, here’s your No.1 –.if you don’t, we’re barely going to recognise you even have a voice.’ The things that need to happen for change are happening: there are stations in the States that have committed, in small chunks of time, to equal play between male and female artists for a week or two weeks. One of the theories over here is that women don’t want to listen to women on country radio, which is asinine. Really, the only solution for somebody like me is, again, don’t listen to the background noise, write songs that you believe in and perform them in an infectious way that brings people to the show. And, radio or not, they come.”

The plan is working. Indeed, Never Will’s lead single One Night Standards has already secured over 4.5 million streams on Spotify alone – and that’s just for starters.

“Hang In There Girl secured the cover of [Apple Music’s] New Music Daily,” says Julie Eldridge, director of artist projects at Warner UK. “We’re always striving for more opportunities like this. Ashley is an incredible performer and songwriter, and we know her existing fans are eagerly awaiting the new album. Equally, we want to introduce a new, more mainstream audience to her music, and playlists are a great way to achieve this.”

While McBryde will not be at C2C 2020, her presence will, nevertheless, be felt onsite. Eldridge says Warner have outdoor and print advertising campaigns running, as well as a digital advertising across social media targeting fans to pre-order. It’s confirmation that McBryde, very much a modern country star, has aspirations far beyond the States.

“Her C2C performances were like nothing I’ve ever seen,” says Peets. “It was an instant connection. The UK’s very important to our masterplan. She is bigger than America, and the UK fans let us know that from the beginning. We’ll continue to make it a priority.”

As Music Week finally leaves her alone so she can focus on songwriting, McBryde comes across as not only excited for the next chapter of her career, but also determined to enjoy it firmly on her own terms.