Hitmakers: Stuart Price on the songwriting secrets behind Madonna's Hung Up 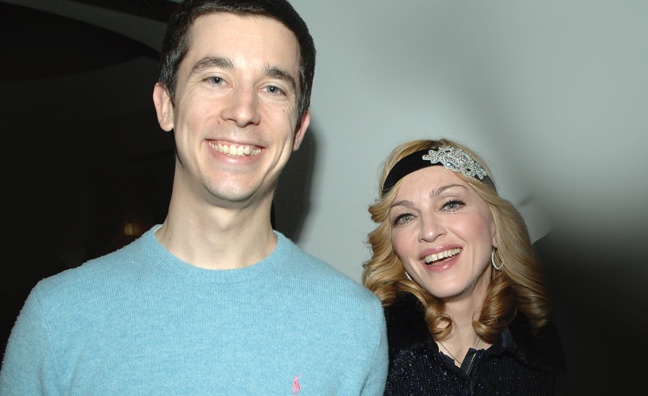 Madonna is in the race for No.1 this week with remix compilation album Finally Enough Love: 50 Number Ones.

In 2005, Hung Up not only took her back to the top of the world’s charts, but it made her a fixture on global dancefloors. Co-writer Stuart Price reveals how a night on the M1, a chance Radio 2 play, and a handwritten note saw the Material Girl sample ABBA’s Gimme! Gimme! Gimme! (A Man After Midnight)…

When I started doing remixes as Jacques Lu Cont, my French label said [producer/artist] Mirwais was releasing material, and did I want to remix it? I happened to be in Paris so I met him and we clicked right away. I remixed one of his songs, then he called up a few months later and told me he had produced the Madonna album [Music] and she was going to tour it.

He said, “I know you can play, I’d like to have someone who understands musically where I was coming from in the rehearsals.” So I went to LA as keyboard player for her band. As it turned out, it wasn’t working and I was going to leave because they were struggling with the direction. But then she shifted it around and said, “As you understand electronic music, can you help with the direction of the show?”

We weren’t writing, but we had that musical connection. That segued into another tour a few years later, which kind of remixed her songs, and afterwards she said, “We’ve reworked so much old music together, why don’t we rework something new? Let’s start writing!”

Madonna was doing a movie at the time with [film director] Luc Besson, that didn’t materialise, which was going to feature music from different generations – a punk rock era, a ’20s era, and a disco era. So she asked, “Do you have anything that is like ABBA at Studio 54?” Originally, I said no.

However, six months beforehand, I had a DJing residency at a club in Liverpool called The Masque, at the Chibuku Shake Shake night. One night, I was coming back from Chibuku, it was 5am on the M1, I was falling asleep – I wasn’t driving! – and Radio 2 was on. Gimme! Gimme! Gimme! started playing, and in that dream state I thought, ‘Wow, that would be a really good sample for a song.’ So just before I went up to play Chibuku again, I quickly hacked the sample into a track that I could play in my DJ set. It was immediate – the whole room felt pretty special. I played it for the next couple of months, but like most DJs, I wore out my records and moved on. So when Madonna mentioned ABBA, I suddenly went, “Well, there is one thing...”

I played her the track, she listened intently, then she just opened her mouth and sang: “Every little thing that you say or do, I’m hung up, I’m hung up on you...” It really happened that quickly. We were in the studio, which was in the attic of my flat in Maida Vale, so I recorded her. Subsequently, the production took some work, but the whole thing about making Confessions On A Dance Floor was that it was such fun. Hung Up really set the tone for that album. In her brilliantly instinctive way, Madonna just pivoted, and instead of doing the movie with loads of sections, she went, “We’re going to make a dance record!”

Madonna is a great enabler of creative freedom

You have to give her credit because dance music was a dirty word in America in 2005, it was not at all on the radio. Did the mixed reaction to [previous album] American Life influence her? It’s a pattern I’ve spotted with many artists that I’ve worked with subsequently. Once someone puts themselves in the freedom zone of saying, “I no longer care how this is going to be received, it feels right,” they tend to be rewarded with a successful record.

The Liverpool track was just three components, ABBA, a filter and a beat! Madonna said, “I need more to go on to make this into a song,” so I just picked up my instruments, and came up with a verse and a bridge structure.

Madonna is a great enabler of creative freedom. We had developed a shorthand on tour, so in the studio we didn’t need to over communicate. The best way to explain our collaboration is how the record says ‘produced by Madonna/Price’, and that’s not because she is just putting her name there. She is as much a visionary as anyone else – I mean, she is the visionary on the record! When she sees the seed of something, she envisions it from beginning to end in a moment. It’s then a case of creating an environment to make it happen.

So our studio days would typically be us working together in the afternoon. Overnight, I would come up with a new song or a template which I would send to her. Then, she would either arrive with something, or she’s very capable of switching on and writing in that moment. There’s a lot to be said for a tireless work ethic and no entourage. It was just two people writing. If you’re focused, you can achieve a lot in a short period of time. I don’t want to reduce the song and say it was easy, but we knew where we wanted to go!

That said, there was no Plan B if ABBA didn’t clear the sample [laughs]. We knew ABBA were reluctant to allow sampling of their work, so Madonna’s manager flew to Stockholm to meet with Benny and Björn at their Polar Studios. She gave them a handwritten letter from Madonna in which she expressed her admiration for their work, and the hope that we could collaborate. What resonated with them, I think, was that we had taken cues from them, but we had tried to move it forward, and they approved the sample that day.

There’s definitely my career pre-Madonna – no pun intended! – and post-Madonna. Hung Up was a nice transition between those two worlds. I went from a background of DJing and remixing into writing and production with this track, and there are times in the studio where people bring it up, so it continues to play a role in my career.