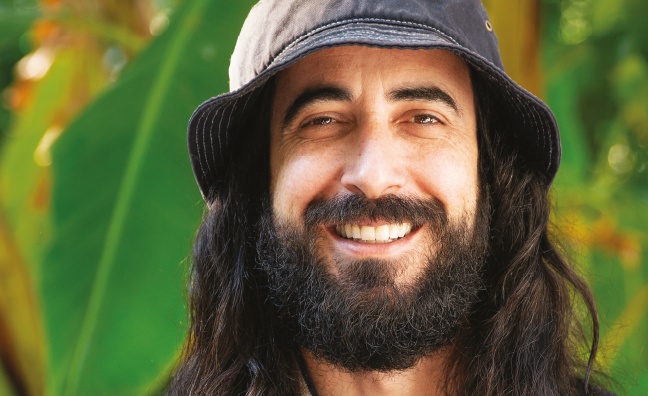 In 2013, producer Yeti Beats – real name David Sprecher – met an unknown artist named Amala Zandile Dlamini. She is, of course, better known now as the chart-conquering Doja Cat. Here, he reflects on how they united with Sza for the platinum-selling Kiss Me More, which won the 2022 Grammy for Best Pop Duo/Group Performance...

I first came across Doja Cat when I had just built a studio in Echo Park – my first outside of my apartment. At the time, I had recorded a reggae band from California called Rebelution, plus some other bands, rappers, and a bunch of random things, but it was almost like destiny that I met Doja. I had an intern named Jerry [Powell], who goes by Tizhimself – he’s a producer who still works with Doja and did Kiss Me More with us. He was going through songs on SoundCloud and played me a demo of So High that Doja had made in her room. When I heard it, I was like, ‘Wow, this isn’t recorded very well but this song is amazing!’ We reached out on Facebook and a few days later she came to the studio and we immediately became friends.

My first impression of her? I thought she was really shy, but as soon as she started singing and rapping, she just had an undeniable talent. It was crazy. Soon after that, I started bringing her to the studio every day; I became friends with her mom, and I’m very, very thankful to this day that she trusted me with her daughter and let her come to the studio. For years and years, we bounced around from management company to management company, but until you’re winning, people don’t really believe you. I never had a doubt, I just thought she was a superstar. I wore many hats for many years, I was her DJ, co-manager, producer, and friend – and all that stuff plays into the music. We make it from a very pure place. It was only about a year ago or so that I stopped doing management stuff to focus on the creative side.

It’s funny, I originally made the beat for Kiss Me More with my friend Rogét Chahayed and I played it for Doja a couple of times when we were in the beginning of making Planet Her, but it wasn’t the right moment for it to connect with her. We were probably three quarters through the record and we really needed another up-tempo song, because we had a lot of mid-tempo and slow songs. I was re-listening to some old tracks, and I was like, ‘Maybe I’ll speed [the Kiss Me More beat] up, put a different bassline on it and a little guitar over the hook part.’ I made it a lot cuter – and that’s something that she’s drawn to.

I was working on it one morning and brought it into the studio that night and I didn’t think she was going to like it, but as soon as she heard it, she said, “I love it – I’ve got a song idea about kissing.” Honestly, it was really easy to put together – Doja wrote the song in probably no more than two hours or so.

When we’re creating records I try not to put pressure on us to make singles; I just try to let Doja do her thing. I consider her to be one of the best hook writers in music – she’s a great songwriter – so I just try to provide her with cool and interesting beats. We don’t make the records with A&Rs or anything, we just make them with our creative circle and whoever we decide to include. I feel very lucky that the label trusts us, and don’t put pressure on us to make something that they want. They empower us to make our records. Doja has such an eclectic music taste, and I’m very lucky that she’s into all different types of music, and her voice is very adaptable to whatever the genre is. To me, she’s such a unique artist in that regard.

The Olivia Newton-John [melodic] interpolation wasn’t intentional. When Amala was working on it that just came to her, maybe because of the ‘bump bump bump-bump-bump’ part in the beat. I wasn’t thinking about Olivia Newton-John, it just happened to go down that way, but we weren’t opposed to it. We were like, ‘That sounds great – but we’re probably gonna have to pay for that [laughs]’.

The track wasn’t conceived as a duet. When Doja finished, she originally had two verses. Then she told me she wanted to get Sza on it, because they had been hanging out in the studio and got along. Amala played her the song, she liked it, and it all happened very organically, and quickly. Sza brought an incredible verse – it’s fun, catchy and, lyrically, everything fits really well. She’s just an incredible artist and was at the top of my list of people to work with and it’s so funny that I didn’t even pursue it! That was completely a Doja thing – she just texted her [laughs].

Everyone I played Kiss Me More for was like, ‘It’s a smash!’ I really believed in it but obviously, before it came out, I got very, very nervous that people weren’t going to like it. The reaction was overwhelming and surreal. The Grammy nominations have been incredible, I feel honoured and I just want to shout out all the people that worked on it – Rogét Chahayed, Jerry ‘Tizhimself’ Powell, Carter Lang, Serban Ghenea, Mike Bozzi, Rian Lewis, and Doja Cat, of course! Years and years ago me and Doja would joke about this stuff. I would always tell her that she was going to get to the Grammys – I always tried to put that idea in her head a long time ago. It’s beyond my wildest dreams.

Wallace Joseph, vice president of A&R, Warner Chappell Music: “Yeti has such a unique and free-spirited approach to songwriting and producing that I really admire. As a music creator, he doesn’t limit himself to a single genre and is always open to working with new acts, producers and writers. He also has an incredible eye for identifying and developing talent – just look at the journey he’s been on with Doja Cat, from discovering her back in 2013 to becoming 2022 Grammy nominees together. Yeti brings passion, talent and a natural instinct for producing to every project he works on, and I know big things are in store for him this year and beyond.”