'I was happier than I'd been in a long time': Warpaint on their return 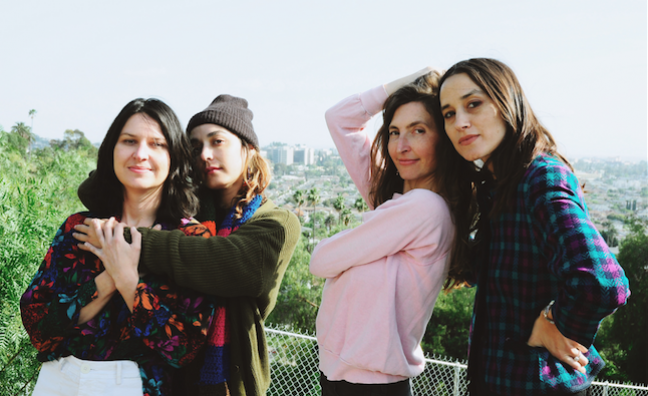 Warpaint are back with their first album in six years, Radiate Like This. The LA quartet have built a reputation for their brooding, difficult-to-pin-down sound which has borrowed variously from psychedlia and dreampop and grunge.

But separation over the course of the pandemic, and involvement to greater or lesser extents in solo projects, has seen them inhabit a different vibe this album. "I think we've got to a softer place: maybe a little more sensitive, possibly a little less angular," says vocalist and guitarist Theresa Wayman, speaking over Zoom to Music Week from Los Angeles.

The band have also recently moved labels, from Rough Trade to Virgin – the latter providing a change of scene after the band's three albums, and a new home for a softer sound.

It's been six years now I think since your last album. How does it feel to be back together as a group?

“We had an impromptu show a couple of months ago – someone hired us to play for a birthday party. Stella was out of town so we didn't play with her but the three of us, at least, got to play together for the first time in about three years. It just felt mind-blowing; it was so good to really play and rock out. It was so therapeutic. I was happier than I'd been in a long time.”

How did you fare over lockdown?

“It was nice in some ways because we got a lot of time to be in our little home studios and mess with things home things and tweak things, and play around a lot like in a very personal way, which we don't always have a lot of time to do. But then it just started to feel too isolated as well. And I just really missed flushing things out with my friends in a room and getting to the bottom of it that way.”

You've got a huge tour coming up. How are you feeling about it?

“It's hard right now because we haven't started rehearsals. And these songs, we've never played them live. Well, a couple of them we played live together, but most of them were layered and recorded in the box – kind of piecemeal. And so I’m a bit apprehensive about how it's all gonna come together. But that's just like, you know, that's projection: you can get fearful about anything if you think about the future of it, you know, so I’m just trying to take it day by day. I know that I had a great time last weekend playing all our old songs. I saw them in a new light. I was just almost had to relearn some of them we just hadn't played in so long. And I just sometimes get amazed by my old self and our old selves, and remembering where we were coming from. It’s like there's some magic there.”

How has the Warpaint sound developed over the intervening years?

"I think we've got to a softer place: maybe a little more sensitive, possibly a little less angular. A little more succinct. We used to have so many different parts for a song in there, and we'd have hard time ditching any of the parts that we liked, and so songs would end up being very long – like three songs in one. Over time we’ve got more streamlined in the way that we put a song together. It's a nice experiment. It's fun for us to progress that way and to explore."

What do you think is the future of indie rock?

“I feel like from about 2011 to 2013, electronic music really took over and it seemed like rock was dead. That is really funny to me: of course it's not gonna die! We are just in a phase where everyone's obsessed and fascinated by electronic sounds being added to live elements. I think that’s an amazing combination of sounds, and I really get off on it. We've always played to drum machines in the past – for a while, before we had a drummer, a drum machine was our drummer. So it's always been a part of us, and we’ve slowly been adding it more and more over the years. Everyone's listening to everything nowadays – you don't often find people that only listen to one type of music.”

We need to remember that we're all coming from the same place, as opposed to nitpicking at each other constantly

You recently moved to Virgin. How has the support been there?

“I think we did three albums on Rough Trade. But we wanted to see what it was like in a different scenario. It was the kind of move that makes sense, and it seems like it’s working well. I do miss our friends at Rough Trade; it was an intimate situation over there. But we just need to get to know our people [at Virgin] a little better.”

How do you feel about being a woman in the music industry at the moment?

“I think things are moving and progressing. It's different to when we started. You see a lot more women coming through on the technical side, doing things like mixing, engineering, behind-the-scenes stuff. All perspectives are important, but women have a unique way of seeing the world. They deserve to be like players in all aspects of the field.”

You've said that lead single Champion is about being a champion to yourself and to others. What prompted this message?

“Champion was actually written before the pandemic, and before the protests and civil rights movements and awakenings. So it just feels serendipitous how perfect the message came to be. We need to remember to pick each other up. We need to remember that we're all coming from the same place, as opposed to nitpicking at each other constantly, trying to find where someone slipped up. We're all gonna slip up. It’s such an important reminder, isn’t it?”