Inside the BRIT Awards album of the year: Stormzy 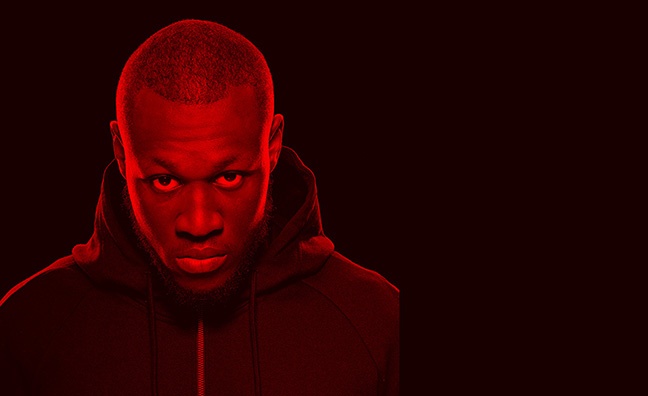 Mike Smith (MD Warner/Chappell UK): “He was signed in the summer of 2015 by Amber Davis, it was something the company was passionate about.

We were really excited about Stormzy working with Fraser, it seemed a very forward-thinking move. It was a broader view of what a record like this could be – it touched upon different genres and sounds – and that’s what it proved to be.

We obviously had MNEK, who’s another of our writers, working on Blinded By Your Grace (Part 2), and that was a pivotal record – people weren’t necessarily expecting Stormzy to sing and have that soulfulness. It was wonderful to reveal that side of him.

Stormzy was well aware everybody was watching to see how it would work out - there was a lot riding on it. That’s why it was something that wasn’t going to be rushed. It’s good that he took the time to make sure it was exactly the record he wanted it to be.”

Fraser T Smith (producer): “Over 10 months, it was recorded in my studio in Fulham pretty much in an old school way – one studio, one main producer, and Stormzy being the great artist he is. There was very little influence from the outside world – Stormzy even went off social media – so it was like we were cocooned in there together.

Stormzy mentioned his life was a combination of gang signs and prayer, and it literally stopped me in my tracks.

Immediately that just conjured up so many sonic possibilities in terms of the prayer side being the strings and choirs, but then the flip side being hard basslines and drums.

That tells a story about where Stormzy has come from in terms of his rise through underground culture, and also through his faith and love for his family. It was a very conceptual record. Stormzy’s vision was so strong and I felt that he was going to show that – alongside other artists like Kano and J Hus – the album format is still very relevant in urban culture.

We hit our stride very early on and got into a rhythm with it where we’d be playing beats and working on the music. Stormzy’s influences ranged from a saxophone in an episode of The Simpsons, through to a choir in the Romeo + Juliet film. It’s really exciting working alongside him because you never know where the influences are going to come from.

Stormzy’s absolutely the hardest-working artist I’ve ever worked with – we would be perfecting lines probably 100 times to get it right, and get the clarity and detail of every word. It was a really exciting period in both our lives. We were in the studio until 11pm, five days a week.

Manon [Grandjean, engineer] and myself would be starting at around 10am or 11am, we’d have a few hours to do some production and get some mixes and sonic stuff going. Stormzy would come in about 2pm and we’d work through. Deliveroo got a lot of love during those 10 months!

Stormzy’s always sung since his first EP, so there was always that melodic side to him. I was ready for that and it was enjoyable to see how his singing improved throughout the process. His melodies are phenomenal on Blinded By Your Grace (Part 2).

Where you’d have expected MNEK to have taken the lion’s share of the melodies, it really was Stormzy who contributed probably more than 50% of the melodic content. It was an amazing feat for a rapper and grime artist.

What’s great about the record is the range of collaborations. Lily Allen with Kehlani on Cigarettes & Cush was incredible, Wretch 32 on 21 Gun Salute was an amazing moment. On Bad Boys, Ghetts absolutely demolished the bars.

Then Hus rolled in at 11pm with about 10 of his friends. They sat quietly at the back as he went round and round the song, then he came up with that fantastic melody that became the chorus.

It’s such a diverse record – you’ve got tracks like Blinded By Your Grace (Part 1) alongside Bad Boys, Big For Your Boots, Velvet. At one point, my concern was that it was maybe too diverse and that people would be confused by it, but we just kept chipping away.

We knew the tracks were becoming stronger and more developed. There’s something to be said for recording in that vacuum, where you’ve got an artist who has as strong a vision as Stormzy.

Hopefully, I was able to help him realise that vision.”