Inside the BRIT Awards albums of the year: Ed Sheeran 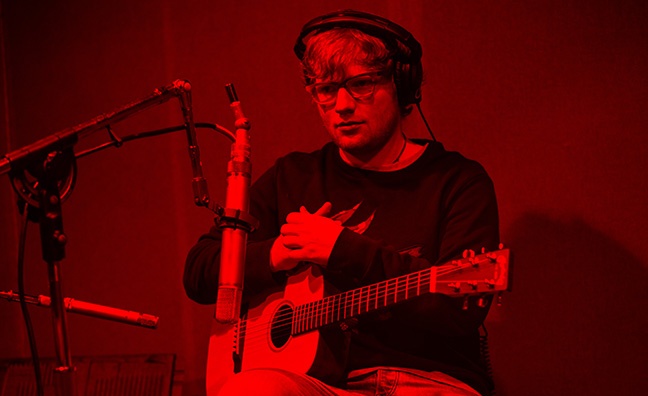 Ben Cook: “The first songs that were in the frame for this record were written in the middle of the X campaign, which is normally the way. We’re normally in the middle of [a campaign] and he says, ‘Here’s my next album’ and plays us the songs.”

Ed Howard: “Castle On The Hill was the first one I heard. I was pretty glad that he was taking a year off because he had really laid it out work-wise during the X campaign. It felt like the right time and he really, really made the most of it. When he’s working, he’s very single-minded.”

BC: “He makes the most of work and he definitely made the most of his year off. We got nervous seeing videos of him wing-walking on a biplane in New Zealand and such like, but he came out unscathed and full of energy to really have an incredible third album.”

EH: “He got back from holiday and then he had this boat trip planned with his collaborator Benny Blanco.”

BC: “Benny doesn’t fly so we had the rather unusual request of fitting a recording studio into the Queen Mary [ocean liner]. It takes five or six days to cross the Atlantic and that was the only way we were going to get him and Benny over here together, so that’s what we did.”

EH: “I don’t think it was actually quite as much fun as they thought it was going to be. That [captain’s table] stuff wears quite thin quite quickly.”

BC: “Benny then spent some time in Suffolk at Ed’s house and they had a bunch of other collaborators join them; Foy Vance, Amy Wadge, Beoga and others. Summer 2016 was a really fertile time. Our job as A&Rs is to support, nurture and challenge our artists in equal measure.

Ed is probably the world’s unsurpassed musical self-starter, certainly of recent times. He can create global hits seemingly on a whim, without any A&R involvement whatsoever, and he’s done that several times. But, for us, it’s about helping him spread his creative horizons and introduce him to people you think are going to inspire him and become friends.”

EH: “With Ed, it is about helping him stay in a great zone for as long as possible, and stay focused and excited by creating new music. If he’s excited in the process then great things happen.

Part of our job was to encourage him to keep going longer and try and keep him a) very confident in what he’d already produced and b) excited at producing a bit more.

Ed appreciates advice and support and that’s part of why he’s so successful. He’s capable of doing everything on his own but, people who work with him, both songwriters and A&Rs, know he’s very open and enjoys the process of collaboration.”

BC: “Knowing the experience from X, which was an incredible record, a real masterpiece, helps. That was done and dusted as far as we were concerned and then, a week or so later, Ed came in and played Thinking Out Loud.

It was the most incredible moment, all the pressure was off and he was just there to have fun and he came up with that. That was always in the back of our mind on this record.

Shape Of You was famously one of the later additions this time, similar to Thinking Out Loud. We’re very biased but we would love ÷ to be the British Album Of The Year.

Those things are always really lovely to receive – but it’s already been an incredible moment in his career.”