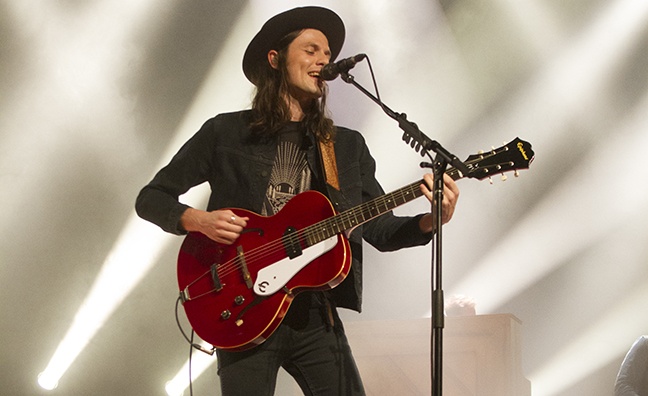 What’s the clearest indicator that a new artist has made it? A hit single perhaps? A BRIT Award? A double platinum debut album?

How about all of the above? For James Bay can tick each of those accomplishments off his bucket list since Hold Back The River was unleashed upon the world in November 2014.

And still only 26, he’s just getting started. “It’s been six months since I came off the road and I’m feeling very creative. I’m beavering away, working on new music,” Bay tells Music Week.

The follow-up to his 2015 Virgin EMI-released debut Chaos And The Calm, which has sold 788,095 copies in the UK according to the Official Charts, will most likely see the light of day next year, he reveals.

“It’s on the horizon - I don’t know exactly when it’s coming out yet - but, the more I work on new music, the closer we get to knowing,” he says.

“We toured [Chaos And The Calm] for a very long time and I really enjoyed it. The only thing that made me feel a bit negative about it towards the end was that I love those songs, but I really wanted to pepper them with new material. So that’s what I’m doing now and I’m having a pretty fantastic time doing it.”

Bay, who is managed by Closer Artists, contests claims that guitar music is not in vogue at present.
“It’s funny, people have spent the last 10 years saying there’s not a lot of guitars on the radio, but you don’t have to look too far to find them,” he asserts.

“I was listening to Frank Ocean and Chance The Rapper’s last albums, and the musicianship is amazing. But when there’s guitar music on the radio, it isn’t necessarily about the guitar as much as it is about the track.”

He adds: “People talk about guitars being on their way out and, when I was a teenager, they started to say the album was on its way out. Nothing’s on its way out! Things come back around. There is still so much relevance to the album. It’s a precious little journey that has its start and finish, and so it should remain.”

The 2015 BRITs Critics’ Choice winner collaborated with writers such as Iain Archer, Paul Barry and Jake Gosling on tracks for his debut LP, and reacts with interest at recent Music Week research that revealed you need an average of 4.53 people to write the very biggest hits in 2017.

“If we’re talking about percentages, it’s 99.9% borne from me, but I have a great time with a few people who have become very close friends, who write and co-write,” he explains, in reference to his own songwriting process.

“It’s all about working together - in the same way that Mick Jagger couldn’t seem to crack any early hits on his own, so he wrote with Keith. It keeps it exciting, and it keeps the energy up in the writing environment.

“I’m a huge fan of Ray Lamontagne, and I remember reading about the painstaking journey he goes through to write songs, holing himself up on his own for long periods of time.

He’s talked about it as quite a strenuous experience and I can relate to an extent - I write songs on my own and I achieve them like that as well. But it’s just a lot of fun to get people in a room, so I’m not surprised that’s how many people it takes to make a hit.

“The other thing that’s fun is when you get that feeling that you might have cracked a special one, you’ll immediately get some reassurance from people who are just as excited as you are. If you’re on your own, fine, great. But it is exciting being with mates and having that experience together.”

Guitar manufacturer Epiphone recently unveiled its new James Bay 1966 Century archtop Outfit, inspired by the singer’s own vintage 1966 Epiphone. For a guitar junkie like Bay, you suspect this honour is his most treasured of all.

“As a musician who has played guitar for nearly 15 years, I would read up about signature models and would dream about having my own one day,” he smiles.

“I thought it might be something I’d get to do five or 10 albums in, but to have done one album and to have dedicated the music to that guitar - and that guitar to that music - it was very cool that they recognised that.”

After the chaos of the past couple of years, Bay is enjoying some much-needed calm, but it won’t stay that way for long, with thoughts inevitably returning to that upcoming second LP.

“I want the next album to eclipse everything the first album did,” he proclaims. “I’m really excited about the music that I’m making - which isn’t always the case, any artist will tell you that! But I’m excited for a new version of whatever I am.”