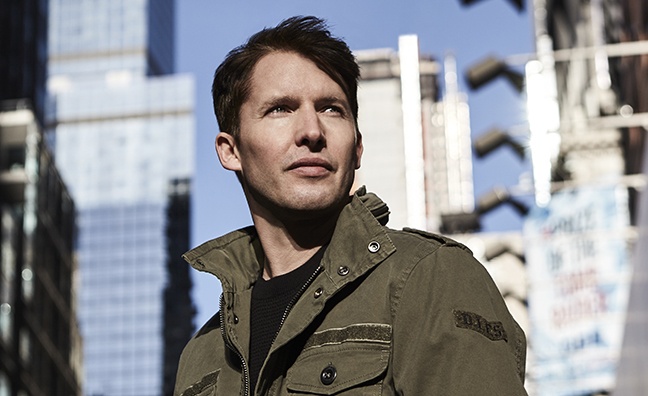 A few years ago, deep in Nevada’s Black Rock Desert, James Blunt considered jacking music in. The singer was at Burning Man festival with Tom Rothrock, close friend and producer of three of his albums, including 2005 debut Back To Bedlam, which has sold 3,339,707 copies to date, according to the Official Charts Company.

As it turns out, the most hedonistic event on the music calendar was the perfect setting for the man who wrote You’re Beautiful to discuss his career options.

“Tom is the greatest adviser I’ve had in the recording business,” Blunt says. “He said that, after getting back in the charts with [2013 album] Moon Landing, I could probably retire and leave it at that. Maybe he meant should retire! Either way, it made me realise I shouldn’t repeat myself and do something that was better.”

That something is The Afterlove, Blunt’s fifth album, which features writing collaborations with Ed Sheeran, Ryan Tedder, Amy Wadge (Sheeran, Shannon Saunders), Johnny McDaid (Example, Biffy Clyro), Stephan Moccio (Miley Cyrus, The Weeknd) and MoZella (Miley Cyrus, One Direction). Paul Samuels, Atlantic’s VP, A&R signed Blunt, and calls the record “one of his best yet, the progressive production will captivate a new audience and show a different side of James.”

Blunt describes it as “bolder and bigger”. “I wrote 100 songs rather than 25 and took two years, twice as long as usual,” he says. “I had a dream team to work with, in fact this didn’t feel like work, where it occasionally did before. We just made it fun.”

Fun meant jetting around the world to meet Tedder, in one instance backstage at London’s Roundhouse before he performed with OneRepublic, or exchanging skiing lessons for songwriting sessions with Sheeran in Verbier, Switzerland.

Musically, it meant diversifying from acoustic ballads (see the clubby, electronic likes of lead single Love Me Better and Forget My Number) and embracing lyrical directness.

“I went to the label with two songs, one that sounded like David Gray or Damien Rice, and one that was like Akon,” Blunt explains. “They said, Do the Damien Rice one. I called Ryan and he said, Get on the plane, but only bring the Akon one. That’s Lose My Number, we didn’t consider the acoustic guitar.”

Sheeran encouraged a more explicit lyrical approach – something Blunt had avoided since “getting a fair amount of stick and abuse” after Back To Bedlam.

The pair have been close since they met when Sheeran was picked up by Rocket Management, and Blunt sums up their bromance neatly: “We get on well. We have a similar hobby, namely alcohol, and we enjoy messing around. We can write for a moment, then have a drink and come back to it.”

He continues: “Ed said, Come on, you’re a songwriter and I loved your first album, you need to be direct like you were then. Then we wrote Make Me Better [dedicated to his wife and child], which tells you exactly what’s going on for me right now. It’s the most romantic song Ed Sheeran has ever written in my life!”

Now a settled family man (albeit one that goes to week-long desert festivals and has sword parties with both pop royalty and actual royalty), Blunt sees The Afterlove as a new start.

This feeling bleeds into the campaign strategy too. “We’re approaching it in a different way,” Blunt continues.

“We went with the most taxing single first [Love Me Better]. It’s like a soft release, with the more obvious singles to follow, rather than forcing it down people’s throats and relying on just one track.”

Released in February, Love Me Better directly addressed the “stick” Blunt has received since You’re Beautiful (942,553 UK sales, 3 million US sales) made him famous.

“People say the meanest things/Yeah I’ve been called a dick, I’ve been called so many things”, he sings in the intro, before referencing his ubiquitous single. “We wanted those to be the first words people heard,” he says. “To confront things and say, That was the past.”

That may well be the case, but while we’re on the subject, Blunt has a point to make about the image You’re Beautiful helped create.

“I haven’t enjoyed some of the marketing I’ve been put through because I felt uncomfortable with it,” he says. “If you put my songs out for Mother’s Day, I feel uncomfortable because they’re not the romantic songs people are being told they are.”

Perhaps he doesn’t realise The Afterlove drops on Mother’s Day weekend, but he continues apace.

“Someone consistently writing about failed relationships is not a successful romantic person! You’re Beautiful is not romantic, it’s about a guy who’s high on drugs stalking someone’s girlfriend on the subway while her boyfriend is there. And he was much bigger than me, by the way…”

Now, thanks to social media, or more specifically, his acid-tongued Twitter presence, Blunt has taken control of his image.

He responds with sharp wit to mickey-taking tweets, and his more general messages are delivered with the self-deprecating tone of a self-aware musician who’s 100% able to laugh at himself.

“If you thought 2016 was bad,” he posted on December 13 last year, “I’m releasing an album in 2017”. Since then, he’s used the platform to tease The Afterlove, highlights include a video where Blunt, naked in his bath says, “I’ve got something huge to show you”, before the camera shifts to reveal the album’s artwork covering his modesty.

“I can control the marketing via social media and use my ideas, it’s more realistic as to who I am,” he says. No one else has his Twitter password, not even manager Todd Interland.

When his forays into Twitter first began, Blunt says Atlantic “didn’t get it”, but acknowledges that things are different now.

“When I first started they asked me to stop, they said it was bad for my brand. I said to my manager, This brand is broken already and maybe I can just be myself now. They saw that people responded to it well.”

The 42-year-old describes his dealings with Twitter as “irony, laughter and not taking things too seriously”.

While he stresses that he holds its songs close, he put some of that spirit into The Afterlove. “Lose My Number is hysterical. It’s the most embarrassing thing you could say to anyone, Hey did you forget to call me? This guy is a loser!”

And is Blunt the guy in question?

For Atlantic, mixing music and personality is key to the album’s success. Marketing manager Chris Ruff calls it a “two-tier campaign”.

“We had a massive result with the last album, and in the interim period, through Twitter and the National Lottery advert [where a Blunt hologram repeatedly sings the line “You’re beautiful” from people’s mirrors] James has become almost a national treasure,” he continues.

“That was in the forefront of our minds. The bath tweet is the perfect example, it was his idea and a very strange day at work.”

Hannah Neaves, the major’s marketing director, says the Lottery advert (which is nominated in the Music & Brand Partnership category at the Music Week Awards) “broke the barrier” for the real Blunt to emerge.

“It allowed that character to come across without us doing it, which was important because we need to make sure the music always comes first.

There’s a lot to appeal to new fans as well as enough traditional James for his core audience.” According to Ruff, Blunt’s next TV campaign (on air now) is likely to be just as omnipresent.

He describes it as “a Fight Club-esque group therapy session”, where it transpires that, “James is leading the session and telling everyone it’s alright to be a James Blunt fan.

I like the idea of a leftfield TV creative, a moment that’ll be a real talking point.”

Neaves, who points out that Back To Bedlam remains Atlantic’s biggest seller of recent years, despite Sheeran mania, adds that the new ad taps into their research into his fanbase. “We know he’s a guilty pleasure,” she says.

“Some fans happily wear a James Blunt badge, and some won’t necessarily admit it. It’s about keeping them all happy.”

Blunt’s manager has been keeping tabs on the fans too. “Love Me Better has drawn in a much younger demographic,” Interland says.

“We’ve seen that from streaming stats and social media feedback. We didn’t release it targeting a younger audience, and we know the fans who buy music in supermarkets are still there too, it’s interesting.”

Interland, who’s been with Blunt for 15 years, says it’s the songs that draw the audience. “People like him because he’s funny and Twitter exemplifies his personality, but James is a great songwriter,” he says, simply.

“There’s a connection between his songs and what really moves people, there’s a hunger for him.”

The most recent album sold 1.5m copies worldwide and he’s still selling tickets,” the manager continues. “Some people thought things might have naturally come to a close for James earlier on but that wasn’t the case.”

And so we return to James Blunt’s possible retirement, which now appears to be nothing more than a flimsy notion floated into the blur of a desert festival.

Fast-forward a couple of years and he’s back, refreshed, with an album he’s proud of. But then, thinking about it, of course he wasn’t going to retire, he’s still got something huge to show us…