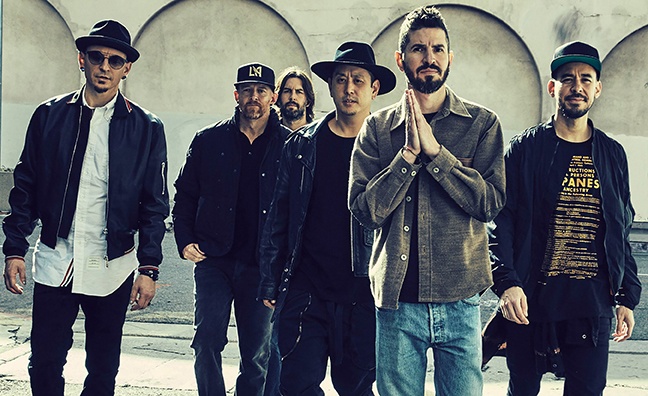 Back in March 2017, Music Week dropped into Warner Bros' London HQ to speak to Linkin Park's co-frontmen Chester Bennington and Mike Shinoda. The pair were in bouyant mood as they prepared to release their new album, One More Light, a record that saw the veteran nu-metal act collaborate with rising pop star, Kiiara, and work with Justin Tranter and Julia Michaels, songsmiths for the likes of Britney Spears, Justin Bieber and Selena Gomez. Tragically, just a few months later, Bennington would no longer be with us. Here, in this candid final interview with Music Week, Bennington talked about his ongoing battle with depression, his relationship with his own musical past and why it didn't matter to him what anyone else thought about One More Light...

Linkin Park have been in this position before. In 2003, 2007, 2010, 2012 and 2014, to be precise. Each of those years marked a studio album – subsequent to their landmark 2000 debut, Hybrid Theory – which has seen co-frontmen Chester Bennington and Mike Shinoda field questions about why they’ve pushed their sound so far away from the one that first defined them.

The latest culprit? Their new record One More Light – due May 19 via Warner Bros – and particularly its lead single, Heavy. It is most certainly not heavy. It has zero riffs, features guest vocals from rising pop star, Kiiara, and was co-written by Justin Tranter and Julia Michaels, songsmiths for the likes of Britney Spears, Justin Bieber and Selena Gomez. Yet if this all sounds surprising, it shouldn’t be. Not by now.

“This is the one thing I laugh at so hard,” says Bennington, reclining in a sofa at Warner Bros’ London offices. “It happens every single time. The initial reaction to every record is, 'Argh! What happened? This isn’t my band!' And then, as time goes on, the record that gets that response becomes the record that someone else says, 'Why aren’t they doing that anymore?' It’s this ongoing conversation which I find really funny.”

“The comment usually is, 'They need to go back to the old Linkin Park!'” grins Shinoda. “But the problem with that statement is it actually means different things.”

Indeed, Linkin Park rarely sound like Linkin Park for long. In 2007, their third album, Minutes To Midnight, was essentially a straight rock record; 2010’s A Thousand Suns was an art-house affair that sampled speeches from political activist Mario Savio, Martin Luther King Jr. and Robert Oppenheimer. And let’s not forget that this is the same band that united with Jay Z for the 2004 remix EP, Collision Course.

Despite this progressive streak, Hybrid Theory, the debut that defined the nu-metal invasion of the mainstream and made their name, continues to be something of an albatross around their necks at times. Though it has sold 1,582,943 copies in the UK alone according to the Official Charts Company, it also established a very rigid idea of what Linkin Park sound like. Put another way, they have spent a long time being judged for the music they haven’t made, as much as the music they have.

Personally, I battle depression, I battle my isms. Most of my stuff is internal, it’s things that I have to take certain steps and do certain things to manage and keep myself in check. And if I don’t do that I fucking fall apart.

Some fans are enthralled by their new Kiiara collaboration; others, as one YouTube comment reads, think ‘Linkin Park is lost in the pop hole.’

“We were asked yesterday, 'What do you think of people who say you sold out?'” says Bennington. “I don’t care. If you like the music, fantastic. If you don’t like it, that’s your opinion too. Fantastic. If you’re saying we’re doing what we’re doing for a commercial or monetary reason, trying to make success out of some formula… then stab yourself in the face! [laughs]”

If this joke – and it is a joke – masks a hint of frustration, it may well be down to the fact that Linkin Park have undertaken extraordinary measures on One More Light to ensure they don’t repeat themselves musically. It is an approach to songwriting that Bennington likens to an inverse incarnation of the Family Feud gameshow. Music Week will let him explain...

“Say you want to write a hard, intense, high-energy aggressive heavy track,” begins Bennington. “What are the first things that come into your mind? Distorted guitar and riffs, right? If we played Family Feud, that would be the number one answer!”

“So that’s off the menu!” beams Bennington.

Because you’ve done it?

“It’s not because we’ve done it,” says Bennington. “Yes we have done it, but that’s not the reason. The reason is that’s the first thing that comes to your mind, so how do we do that without pulling out all the obvious cards? How do we shoot you without having a gun?”

The result of this oppositional, er, gun-less approach is an album that pushes Linkin Park’s sound more than ever before. With hindsight, the writing was not so much on the wall as it was on Mike Shinoda’s Twitter feed when he wrote ‘genre is dead’ back in February.

“The band was called Hybrid Theory before it was called Linkin Park,” offers Shinoda. “It’s been part of our DNA since the beginning.”

A chillaxed yin to Bennington’s energised yang, Shinoda speaks with enormous passion about the voyage of discovery that occurs between albums, one which recently turned him into a fan of The Who. It was actually his passion for music blogs that helped him discover grime, which in turn led to one of their latest album’s stand-out songs, Good Goodbye. It sees them reunite with previous collaborator Pusha T, while also recruiting grime’s man of the moment Stormzy.

“It happened relatively recently, a couple of weeks before his album came out,” recalls Shinoda. “We didn’t think it was going to come together because he was so busy, but it did. We’d worked with Pusha before, you assume it’s going to happen, but Stormzy less so. We didn’t know what he would send in, [but] when he did, it was like, 'This is exactly right for the song, it’s awesome!'”

The upshot of this could, of course, help Linkin Park find new audiences - especially via streaming. It is, however, something both band and label are keen to stress is an organic decision, not a commercial one.

“All the collaborations that Linkin Park undertook for the album were creatively led, rather than designed to reach specific audiences,” explains Emily Caron, senior marketing manager, global marketing, WMG. “Kiiara was a huge Linkin Park fan and they just enthused about her voice when they met. They didn’t realise that Stormzy was as successful as he was when they first reached out to him, they just loved his sound.

“Of course, working with such artists does introduce Linkin Park to new fans and that’s great,” continues Caron. “But the vision of the album comes from the band wanting to try something new and to challenge the status quo, just as they’ve always done.”

Another example of this is Linkin Park opting to work with a host of co-writers this time, including Justin Parker, Eg White, Jon Green, Ross Golan, plus the aforementioned Tranter and Michaels.

“The people we were reaching out to was basically [just] looking at credits,” reveals Shinoda of their search criteria. “We looked for songs we knew had co-writers on them, and asked ourselves, 'Whose name shows up a lot? Whose name showed up more than once?' We reached out to Justin and Julia because it occurred to me that they have some variety. People talk about the super pop stuff in their catalogue, which they do have and they’re very good at. But I think they’re more versatile than that.”

Given that, at one point, Bennington says some of Linkin Park’s biggest hits are essentially “all pop songs” you have to wonder why they wanted to reach out in the first place. Was it just to learn ways of doing things?

The next stop of this unknown voyage will be to release One More Light into the world, a campaign which began back in February with the band hosting a Facebook Live session, where they delivered an exclusive performance and Q&A via the platform.

“They have always put a huge emphasis on communicating with their fans, and the internet and social media has enabled this to explode,” says Caron.

“They are the biggest band on Facebook, with 62 million likes, and have 8m subscribers to their YouTube channel. They’ve driven such huge numbers because they continue to connect, using social media channels for ongoing dialogue, responding to fan feedback and offering full involvement. We’ve worked with Linkin Park to maintain their social media presence and expand it onto platforms such as Instagram to reach the widest possible audience and are now working with YouTube and some great creators. But it’s the band that drives the process, they are hugely involved and it’s their authenticity that engages fans - and us!”

All of this, however, pales in significance compared to what the album actually represents to the band themselves: an honest snapshot of their lives right now.

“Personally, I battle depression, I battle my isms,” says Bennington. “Most of my stuff is internal, it’s things that I have to take certain steps and do certain things to manage and keep myself in check. And if I don’t do that I fucking fall apart. For me, a lot of it was just surrendering to what I have to do. If I do that, then I can actually participate in everything that life has to offer.”

During the recording, a heart defect resulted in one of Bennington’s friends suddenly passing away. At the funeral, Bennington met his son – a big LP fan – and played him the music they’d been working on.

“He’s just sitting there like, one after another, crying,” recalls Bennington. “He’s like, 'Dude it’s like you’re fucking saying everything that’s going on in my life.' To me, that experience right there was worth everything negative anyone has to say. That experience was worth the entire journey of making these songs. If for any other thing, being able to put a voice to how he was feeling in that moment about his dad and his life, summing it all up when he couldn’t say it himself, that’s what it’s about.”

It speaks volumes about the kind of band Linkin Park aspire to be: which is not (nor ever has been) to remain the same band they were when they started out.

“When we made Hybrid Theory, I was the oldest guy in the band and in my early 20s,” says Bennington. “That’s why I guess it’s like, Why are we still talking about Hybrid Theory? It’s fucking years ago. It’s a great record, we love it. Like, move the fuck on. You know what I mean?”

Bennington recalls a recent experience in which he ran into a woman in her mid 30s. She was a big fan.

“I love Linkin Park,” she exclaimed. “I started listening to you when I was 17! You soundtracked my youth.”

“That’s really cool,” he replied. “Because now we can be the soundtrack to your adult life.”