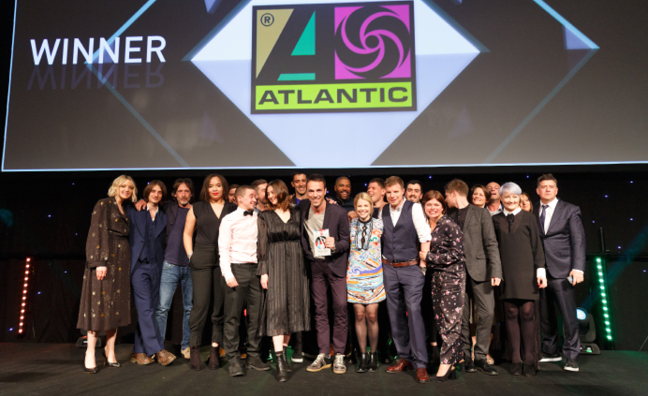 “I think they’re all worthy nominees, there are some amazing radio stations that have put together amazing playlists and supported a really diverse range of artists. But I think with 6 we have a freedom, we have people to curate their shows and support certain types of artist that maybe other stations wouldn’t go near. We just believe in what we’re playing.”

“We’re a really dedicated independent music retailer, we put bands on in the shop and really champion the [customers] more than anything. We make it easier for fans to see bands for free, and I’d like to think that’s why we won tonight. I don’t think it’s a surprise, but it’s always going to be a surprise to a point.

There are so many amazing independent record shops in the world, it’s not a surprise but it’s a real honour.”


Award: RECORD COMPANY OF THE YEAR

“I’m thrilled and delighted. Last year was this incredible marquee moment for this company [with Ed Sheeran]. We’ve been growing and developing and building this really wonderful team of exceptional talents but also exceptional people, and a really great energy within the label.

I think that’s been borne out in what happened last year. It’s clearly a tough category, super [well] contested. I think the industry overall has had a really good year, there’s some real strength across the industry and with the other labels.

It’s difficult to say why we won it, but I really hope we were recognised for everything we did and not just one big thing, because that’s really where our value and our strengths are in being able to have that breadth.”

“We’re honoured, surprised and flattered. I only recently took over so I think it’s my predecessor, Pete Thompson, who deserves this award, and [owner] Kenny Gates, who basically drives everything.

This is really – more than any other nominated label – a collaborative thing, it’s not a one-man show.”

“It’s fantastic! We work very hard, all year round, tomake Spotify the very best music streaming service that we possibly can for music fans, and to be the best possible partner for artists, songwriters, managers, labels, publishers and collecting societies.

Winning this award means that our efforts are working. I think [we won] because the industry can see that we’re truly intent on contributing towards artist development, building artists’ careers and being a great partner.

In 2017, we have really doubled down on artist marketing campaigns, fans first events and, overall, connecting artists with their audiences.”

“If we were ever to win it, it was this year. Ed Sheeran won awards tonight, Steve promotes Ed Sheeran. Stuart [Camp, Grumpy Old Management] won an award, this is a great year for us.”

“It’s amazing, it’s probably the most credible music industry awards ceremony there is. It’s been a great year. What can you say? The live music space is so competitive. SJM win it year in, year out and they’re the benchmark, and so for us to win is a massive honour.

Thank you to everyone who voted for us, whoever they are! One of the things we wanted to do when we started at Kili was to develop new things through to become as big as possible.


Award: LAW FIRM OF THE YEAR

“We feel excited, very thrilled, very honoured. We were disappointed not to win last year, so we’re thrilled to win this year. I think we know who we are as a team and we have a clear strategy, we each have our own worlds with the clients we work with and we work as a team.

This year we had another Queen tour, Harry Styles’ solo release, Stormzy has done incredibly well and we’ve got a breakthrough artist, Dave, as well.

Across the board, from catalogue to new artists, we’re doing it. In addition, we have a litigation side, they’re doing incredibly well too and have done some big cases. We complement each other really well.”

“I’m a little bit surprised. I don’t win awards traditionally, this is only the second award I’ve ever won in radio. The other was an ARIA last year, so I’m not used to speeches! I’m really chuffed.

Hopefully people would have voted for me because they like the music that I play, which is always very carefully curated and is something that is always a genuine passion for me.

I think that’s really important for a radio show. It is never not a joy, no matter how bad your day is or how tired you are, you always come out of that show feeling energised, it’s just such a magic thing to be a conduit for good music in that way, to be able to touch so many people.”

“We’re delighted. It’s a competitive category. I think we’ve had an amazing year, but you never think you’re going to win this award. We don’t think about people looking at what we’re doing, so winning this is gobsmacking.

Wow, somebody actually thought what we did was good! We love the artists we work with, that’s why we work with them. We couldn’t do it any other way. When it works, it’s the greatest feeling, not just for us, but them as well.”

“It’s really amazing, it’s cool to actually just be here and be recognised as something that is valuable to this industry. I think small venues like mine and the others [nominated] sometimes don’t get a look in with these kind of bigger players.

It’s just the recognition, all I really care about is helping to promote people getting into what we do. We train so many people who then go out into the wider industry.”

“It’s amazing, we genuinely didn’t think we would win it this year, but it’s a great feeling. There was so much pressure on this album and it’s a joint effort, the whole team pulled together on this – there’s a real family community around the Ed Sheeran campaign. We’re just very happy to win.”

“It’s really important for a foundation like this to be honoured in front of so many people from across the industry. PRS Foundation is really unique.

We are offering very tailored support to musicians and to music organisations that simply isn’t available elsewhere.

We just know that our funding is making an impact and we just want to ensure that we can keep going with that and do even more if possible.”