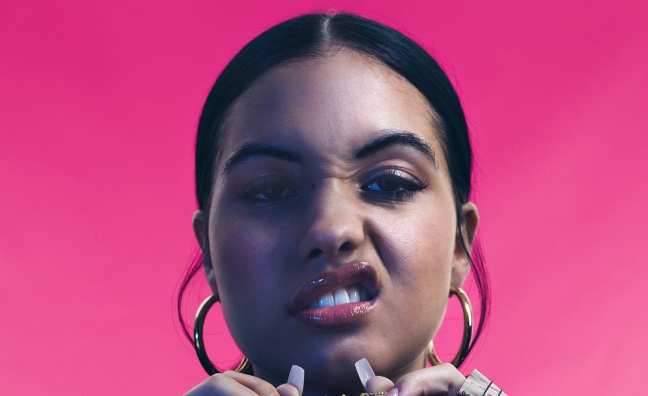 It's December 2017 and Mabel McVey is busier than ever before. Recently unveiled as part of the shortlist for the Critics' Choice Award at the 2018 BRITs, the in-demand singer is braced for her biggest year yet.

Still riding the wave of hit single Finders Keepers, a collaboration with rapper Kojo Funds that peaked at No.8, Mabel is putting the finishing touches to new single Fine Line, which features Not3s, when Music Week drops in to hear her story so far.

The daughter of Neneh Cherry and Masive Attack producer Cameron McVey has had always music in her bones, and 2015 debut Know Me Better was the lit the spark on a career that is set to explode this year...

“Yeah! I’ve had my first big record that has really reached the mainstream [Finders Keepers, 541,224 sales, OCC]. It’s my first Top 10 and it’s very exciting. But the most exciting thing, the thing that makes me the happiest, is what it means for the future. I feel like now people are getting introduced to me, even though I think I’ve been around for [a long] time.”

“I’ve been one to watch for a while! (Laughs I wasn't expecting for things to take off the way they have. I put a song on SoundCloud [Know Me Better] and Annie Mac made it Hottest Record, and then I signed a deal with Universal. I was quite young, I had to spend a lot of time experimenting and figuring out what I wanted to make. I had moments, difficult ones, where I was making music I wasn’t sure about. And then you have moments like Finders Keepers, which is probably one of the most magical moments of my life.”

I want to tour the world, I want to sell loads of records, I want to be successful on my own terms

How has your team helped?

“My team is amazing. I have an incredibly talented manager [Radha Medar], meeting her was a really big turning point for me, she really saw the artist I wanted to be. And we’re all like family, which is something I really learned from my parents, who are also in music. The people around you should be people you love, not just people that are good at their jobs. And I’m always very honest and open about my goals; I want to tour the world, I want to sell loads of records, I want to be successful on my own terms. The massive lesson I’ve learned is handing over that trust and that if you don't work hard, then your talent means fuck all. I know what I want, and so far people have responded to just me being me.”

How healthy is new music at the moment?

“The UK is amazing, especially for the type of music that I’m making, and my peers like Jorja Smith, Not3s, Kojo Funds... I just feel like it’s a really positive time for British music and everyone’s looking over here again. We’re really making some noise.”

“I’ve learned that to be the best person and the best musician, I should be experimenting with all the different places I’m from. I have London, Stockholm, and Sierra Leone to draw from. After Finders Keepers, I decided I just wanted to make fun music. So I spent a lot of time writing fun, up-tempo tunes that are quite sassy. I wouldn't say its like Afrobeat, there’s a nod to that world, but it’s still pop, R&B and soulful."

Are today’s new artists in tune with their digital stats?

“Definitely. I don't have to wait for somebody to send me a stat, I can just go on a playlist, and [see] it’s got this many followers. To know, ‘I have this many followers, I have a voice and I’m going to use it’, it's good to be aware.’’

Is it exciting to tell your story?

“Yeah, I mean I’m not sure how exciting I am! (Laughs If I can be an artist that people can relate to and make people feel something… My favourite artists, the reason why they make me feel something, is because they are very open, honest people. It’s a scary thing, but it’s beautiful and it's definitely what I aspire to.”

Do you feel it’s important to have a message as a new act?

“Definitely, I try to talk a lot about anxiety, and mental health and depression. I think that a lot of creative people suffer from it and actually it shouldn’t be a negative thing. It’s really frowned upon, and you’re supposed to be OK all the time. I’m actually very lucky because I grew up in a creative household [Mabel’s parents are Neneh Cherry and Massive Attack producer Cameron McVey] where it was like, ‘Oh she’s one of us, just learn how to play an instrument and always express what you’re feeling’. But I know that there are lots of people that don’t have it that easy.  So I hope that if I talk about it then other people will too, because talking is the best thing you can do.”

Does a new artist know when they’ve ‘broken’?

“I don’t think I’ll ever know. Hopefully I won’t because I won’t have time to stop and see it. I think you just have to carry on. Yeah, I’ve had my first big song or whatever, but it doesn't actually mean anything unless I carry on. And nobody will really come looking for me, I’m going to get to that point you know, but it is about just keeping it up.”

Music Week also heard from Polydor co-president Tom March who said: "Mabel is an artist that Polydor have been developing for three years now. We had to temper media and industry excitement while building and delivering her as a career artist. She's been busy putting out music, playing live, learning and finding her sound for the past two years and now she is ready to go. I fully expect Mabel to be one of the biggest new stars in the UK by the end of the year and everything is in place to make that happen. She is very special indeed.”