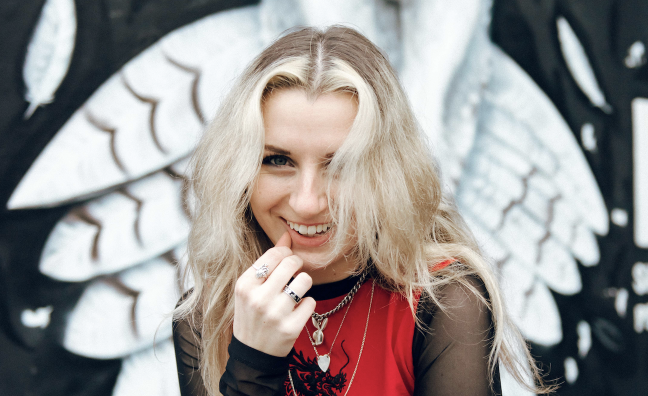 This week's Rising Star is Daisy Carberry, coordinator UK marketing (frontline recordings) at BMG. Here, she discusses her path through the business so far and reveals her ultimate ambition to set up and run a label...

What have you made of the music industry so far?

“I studied songwriting in Manchester, but I quickly found that my interests lay in business. After working at two venues and doing work experience at indie labels, I interned at BMG, where I now have a permanent role. The industry has proven in parts to be everything I’d hoped – diverse, innovative and (mostly) glamorous. However, it’s also been hugely surprising: the hours of planning that go into each element of an album campaign, the size and scope of the teams involved in every release, the pace at which labels are signing, developing and releasing new music. And, most surprising of all, the microscopic portions of food at awards ceremonies.”

“There are countless campaigns I’m proud to have been a part of, but none more so than Run The Jewels and their latest album, RTJ4. This is not only down to it being their first album released with a label other than their own, but also the record’s social and political stance. It’s an unapologetic condemnation of systemic racism and those who refuse to respond to it. This campaign is a necessary reminder that a label’s role isn’t merely marketing a product – it should also be a safe space that enables artists to put out music that is passionate, truthful and incites meaningful change. I will be forever grateful to have even played a small role.”

“I’ve found it truly heartbreaking to watch as some of my favourite venues face closure, tour management companies are put out of business and friends struggle to fund their music. However, I truly hope the industry
will take some positives and that the value of music venues and their staff, as well as the importance of music as a uniting force during such bleak and challenging times, will be remembered in years to come.”

What would you do if you ran the whole business for a day?

“I would call for a nationwide meeting attended by the heads of all labels to discuss positive change. It’s at times like these that the industry should be acting as one, rather than in competition, creating opportunities for those from less privileged backgrounds, encouraging diversity and fighting discrimination, prejudice and inequality.”

“To set up and run a label. The label will sign, develop and market new artists from a diverse range of genres and backgrounds, focusing on fairness and transparency, beginning with flexible deals to suit each act and ending with a collaborative campaign between them and the label.”