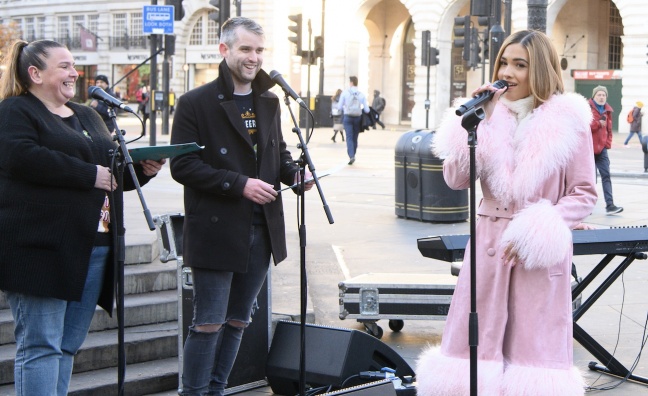 Radha Medar of Metallic and Polydor's Ben Mortimer talk Mabel in this month's Sync Story, as the star teams up with McDonald's for its Christmas campaign...

As far as pop shows go, a pavement gig in the middle of Piccadilly Circus is something of a curiosity, but that's precisely where Mabel found herself at the end of last month.

The star, who’s signed to Polydor, is gearing up for the follow-up to her debut album High Expectations, and the impromptu performance came wrapped up in a package with a huge Christmas sync with McDonald’s.

Mabel’s cover of Cyndi Lauper’s Time After Time soundtracks the Imaginary Iggy campaign, which tugs at the heartstrings in the way only a good festive ad can. The track, which is now available for download, is supporting FareShare, with 10p from every download going to the charity.

Unsurprisingly, Mabel’s team are overjoyed to be part of the campaign.

“Opportunities of this scale and calibre that have the ability to touch millions of hearts across the nation at such an important time in the musical calendar are incredibly valuable,” manager Radha Medar tells Music Week. “To be able to be there alongside the creative and deliver a track and campaign that connects as it has is one thing, and to do our bit to help contribute to five million meals with FareShare makes it all the more worthwhile.”

What’s more, Medar says the outdoor gig was a “delight” that represented “a chance to reconnect with fans again as live has been at a minimum due to Covid”.

“We knew this was a great project to be involved in for Mabel,” he says. “First off it’s a great cause and secondly, when Becky Hill did it last year, it brought real awareness to her as an artist to a whole new audience – suddenly my mum knew who Becky was! Plus Mabel has absolutely nailed her version of this classic song. Her vocal suits it so well.”