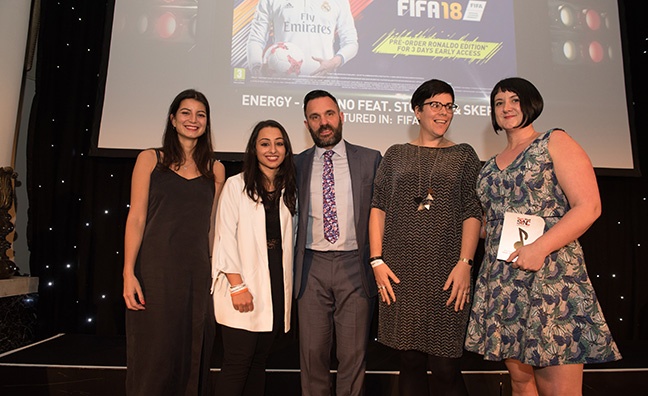 Adam Gardiner, senior director, sync, (Universal Globe): “We’ve got a really good strong team. This is a very competitive category, so it’s nice to get it.

Whether the campaigns are big or small, the same amount of time goes into them. The sync sector is an integral part of a campaign now

Verity Griffiths, head of sync, (Cooking Vinyl): “It’s an amazing track and seemed to fit perfectly from the start. I didn’t expect to win but I’m very happy FIFA won with a new artist this year.

It’s Avelino's favourite game so that’s a winner, at the start of someone’s career, it’s a great look. FIFA is something we pitch hard for.”

“This track came six months ahead of the album, that’s what they were looking for: unreleased music."

Glenn Herweijer, creative director, (Feel For Music): "We’ve covered a lot of ground in the past couple of years, we try to push boundaries.”

Ben Sumner, managing director, (Feel For Music): “We're really surprised to win! We’ve managed to stick to our beliefs of getting really interesting syncs and artist partnerships out there.

We specialise in working across a lot of games, it's an exciting area to work in. Final Fantasy and Assassin’s Creed were great to work on.”

Simon Ballard, licensing manager, (Mute Song): “It feels wonderful to win, especially for one like this which is a use we’re really proud of.

I think the win is thanks to the supervisor, Will Quiney who, because we have a more esoteric catalogue, often has faith in taking risks and going places that other people might not, and not necessarily going for the most obvious choice, but the most interesting choice.”

The supervisor approached us and it was a straightforward clearance. After seeing it in such an iconic part of the film, I thought, 'I have to nominate this.'

I helped the band get a good deal which is my job as the gatekeeper and their management were 100% behind it, too.”

Kirsten Lane, managing director/owner, (Right Music Limited): “It feels brilliant to win! This wouldn’t have happened without Edgar Wright, the writer and director of the film. It was his vision.

They didn’t shoot a single frame without all the music being cleared up front, so this is a project I’ve worked on for four years.

Right from the very beginning I could see from reading the script just how closely the music and the film were interlinked. Even the windscreen wipers are moving in time with the music!”

Sarah Bridge, independent music supervisor: “It's a huge surprise. I have long been a fan of lots of my fellow nominees, so I am extremely flattered.

We are all so very lucky to be working in music and I am immensely grateful that I get to combine working with my two favourite art forms - film and music.

The increased recognition of the field of music supervision in the UK, has led to the formation of awards ceremonies such as this one. This is a really positive progression in this section of the industry.”

Emma Lomas, licensing & creative manager, (Beggars Group): “I’m really excited and proud to win this one, it’s one of my favourite syncs that I’ve ever worked on.

It was a special thing that PerfumeGenius recorded a version of a classic Elvis song especially for this project. It just works to the picture so well. It’s a very special re-record and a very classy project."

Ed Bailie, director/music supervisor, (Leland Music):  "I didn't expect this at all. It's a privilege
and an honour to do what we do and get to work with the labels, managers, publishers, artists and composers that we owe our careers to, and all of the filmmakers and advertising creatives that help us work with music.

To be given an award is a ridiculous cherry on top. The John Lewis Christmas campaign was a highlight, and there's a new one in the works for this year."

Sofia Urquhart, music supervisor, (Tin Drum Music): "There were many layers to this campaign, but Damon Albarn and Jamie Hewlett were fully involved and very helpful throughout.”

Pete Kelly, creative manager, music, (BT Sport): “It’s probably the project I’m most proud of, ever. A lot of thought went into it, it’s rare to get to work so closely with an artist to create something really special.

The whole thing was commissioned, and to turn up to something that values commercial music and do something original with an artist is a nice treat."

Ayla Owen, head of music, (BBH/Black Sheep Music): “I wasn’t expecting to win this at all. It’s heartening to know that people are appreciating a really fine piece of film that uses a classic song instead of just having a sync with music from a chart artist that everybody recognises.”

John Grainge, creative, (Sky creative agency): “The thrilling version by Daniel Johnston made it sound haunting. I think it stood out because it was so stripped back, it’s an honest performance.”

Zoe Hewlett, head of music licensing,(Sky): “John is one of our wonderful creatives in the Sky Promos team and he trawled through many, many, many tracks to find the perfect fit.”

Martin Dingle, executive, (BBC Music Copyright): “The music works perfectly and the scene is really strong. It really does suit the drama.”

Fiona Jessica Wilson, singer: “Testament to that is the amount of emails we've received from people around the world who've been touched by it."

Nora Felder, music supervisor (Picture Music): “It feels great to win because this is a British awards and I’m just honoured that they’re honouring an American – there’s so many amazing creative music people here.

Whenever you have a season 1 series it can be trying, we deal with very limited budgets and I think one of the main challenges was convincing people that a show about monsters from 'the upside down' was a very important and amazing story that should be taken very seriously.”

Pete Kelly, creative manager, music, (BT Sport): "I feel like we've made a real difference with music at the channel. We did six or seven artist-led pieces last year.

Big Narstie's was viewed 1.8 million times in under 48 hours and led to a direct link between people tuning in to watch a Conor McGregor fight.

To pull these projects off and see a tangible result as opposed to just a nice, creative thing is amazing. It makes people stand up and say, 'This a thing worth bothering about'.

The fact it's been recognised is a wonderful thing."

Rinse FM helped us bring in P Money, D Double E, Big Narstie and Novelist. They teamed up with the
gamers into four teams and there was this pimped out sofa for them, which had everything you need to be a glutton and play games! It's the first in a series of things we'll be doing."

Emma Lomas, licensing & creative manager, (Beggars Group): “We won it before so we didn’t expect it to happen again. It wasn’t expected but we’re very, very happy to win.

I think we won due to the calibre of our artists and the wide variety of syncs that we’ve been able to do. We’re lucky to work with such a great catalogue.

Grimes with Stella McCartney and the Perfume Genius with Prada spot is obviously a personal favourite. It’s been a busy year, we’re definitely getting the champagne in.”

Jim Brackpool, head of music, (BT Sport): “We’re surprised to win it two years on the bounce, but I think we are best in class. Can I say that?”

Pete Kelly, creative manager, music, (BT Sport): “It’s nice to be back, this one means a lot – it’s a really special time for us because Jim’s leaving and if there’s one thing that’s become really clear in the past weeks it's that we’re a really, really tight team. It’s the kind of thing that doesn’t come along very often."

Tom Foster, head of film and TV (Universal Music Publishing Group): “It feels great, we really weren’t expecting it. What can I say? We work really, really hard and it’s great for that to be recognised. We’re very grateful.”

Itamar Shafrir, Senior creative manger (UMPG): “I think what we bring to the table is the fact that we always pick up the phone despite the fact that we have the biggest catalogue in the world.

We always get back, no matter how big or small the request.”

Barns Courtney: "Tracks like Glitter & Gold were recorded in my friend’s bedroom in a decommissioned old folks home in North London.

We made the drums out of an old filing cabinet in the hallway and the bass out of a detuned piano in the rec-room. It's crazy to see those tunes out in the wide world on TV and movie spots.

It’s even crazier to win an award for them. I want to thank everybody at Songs Music Publishing, Universal Globe and my management team for believing in me, and killing it from the word go."