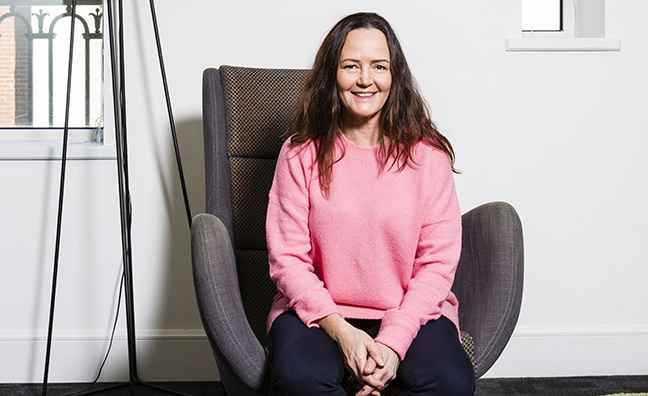 This article is written from the perspective of someone – me – who has worked with Jo Dipple over the last 10 years. I can sum up her time at UK Music in these words: she came, she saw, she smashed it!

Interviewing Jo, there is no real sense from her of her enormous achievements at UK Music. She is a restless soul, and for her, a formidable work ethic is probably the number one driver. She is organised, driven, and in her own words, a conviction operator. She believes in the wonderful creativity of our country and has, throughout her life, striven to protect and promote the creative backbone of our country, believing it drives everything from commerce to culture in equal measure.

Her early years are perhaps surprising for those who know her as a down-to-earth, no-frills sort of girl. The daughter of a stockbroker, she attended the same school as Princess Anne, as a boarder, and describes herself then as quite bookish, not at all sporty, into science and not one of those debutante types. If you went to a posh boarding school for girls in those days, your achievement would likely be measured by the wealth of the husband you married. “I didn’t want to marry some posh git then,” she laughs.  “Now that posh git is infinitely more attractive, but I can’t seem to trap him.”

She went to the University Of East Anglia, one of the new breed of universities that was setting the pace for the creative industries. And true to form, Jo spent most of it in London going to gigs and clubs. She studied politics and sociology. “We all went on the Poll Tax march and it changed me,” she remembers. “Mounted police charged into hippies, squatters, women and children. My friend Gordon was arrested. It turned out the arresting police officer was arresting someone else at the same time in a different station. We got him off, but that evening, after the rioting, even the Labour Party blamed the riots on “anarchists”. For those of us who were trapped and terrified in Trafalgar Square, this was a kick in the gut. Fairness did not win that day.”

Jo left university to start a series of temp jobs as a receptionist and dogsbody. One memorable gig was at a bookies in King’s Cross (not the shiny steel and glass King’s Cross of today, but the then-seedy underbelly of London), where there were bullet holes in the windows and the owner barricaded himself in the back room most of the time. She describes such jobs as formative, giving her an opportunity to see into other people’s businesses and giving her exposure to working life. In 1992, she moved into the newspaper industry, starting at Today newspaper, now extinct; the News Of The World, gone; and eventually working for Mirror Group for 12 years.

Her first job was unremarkable, and involved, amongst other things, making sure the fridges were stacked with bottles of wine and glasses from Leather Lane market in Holborn. Excessive drinking was completely normal, as were behaviours that wouldn’t be allowed anywhere near a modern office. Robert Maxwell, she remembers, had a predilection for peeing off the roof of the Mirror Group building onto the pedestrians below.  It was just one of many things that probably shaped Jo into the seasoned executive she is today.

The politics of that period were formative. New management was in place at MGN and many famous Mirror figures walked out. Alastair Campbell was one, and Jo remembers being in the office as Paul Foot wrote his last column. Strikes were common and the management changes placed an uncomfortable distance between the Daily Mirror and the Labour Party. A fissure had opened between the old guard journalists and the new management that put Labour loyalty under the spotlight. Jo formed a new relationship with the party and the newspaper. She set up briefings, lunches and dinners between Mirror Group executives and Labour politicians.

She started writing for the newspaper, getting involved with Tribune and managing Mirror campaigns including the Rolling Rose Roadshow and National Crime and Health debates. “The Mirror sponsored the European Dinner that John Smith made his final speech at,” she recalls. “I borrowed a fiver off Gordon Brown to buy beers that night and got into the office hungover and late. The first call I got was from Margaret Beckett telling me John, the lovely clever man, had died and urgently asking for a transcript of his final speech. I called Alastair. I called Charlie Whelan. I called Sarah Brown who was there for Hobsbawm Macaulay. None of us had a recording. I was there for historic events but my role was often a bit of a shambles. When I worked for Gordon over the 2005 Election campaign, I never went out without a tape recorder.”

Piers Morgan arrived at the Mirror in 1995 as Editor. She found her first champion. He gave her freedom, trusted her instincts, and invited her to take up the role of editor of a Dear Jo letters page. Not to be confused with Marje Proops, then the doyenne of agony aunts, Jo survived the overt hostility from said wonderful lady who only ever referred to her as ‘that girl’ or Joan. Jo was given her editorial freedom, creating opinion pieces and political dialogue which sometimes got her into hot water, but Morgan always had her back. She found she had 100% support and thrived in that environment.

The ongoing relationship with Labour took Jo into the path of Tony Blair, Gordon Brown and John Prescott. On the night of the 1997 Labour landslide, Jo was there singing Things Can Only Get Better at Royal Festival Hall, having edited eight editions of results for Friday’s paper. “That will always be one of the most exciting nights of my life,” she says. “The result, the campaign, the feeling that anything was possible, Tony, Alastair, Gordon, Peter [Mandelson], Sue [Nye], Anji [Hunter]. I was enthralled. I remember meeting the Mirror team as the dawn of New Labour rose over London at the Britannia hotel in Docklands for breakfast. Fiona Wyton asked for a poached egg. They didn’t do poached eggs. She said, ‘Labour’s just won a landslide. You can do any eggs I want’. It felt like the world had turned.”

Jo had been noticed. Gordon Brown invited her to take a job at the Treasury, and she became a special adviser working with the most powerful Chancellor of the Exchequer for many years. Like everything she does, she loved it, working with some of the most brilliant people in the country, shaping the economic and political arguments that would persuade the public their faith in the party was more than justified.

Coming from parents who are conservative with both a small and a big C, she had travelled a long way, maintaining a keen interest in justice and fairness. Her parents were enormously proud of her, but didn’t quite understand what their daughter did, or why – a common observation of many successful women. Our parents love us, are very proud of us, but there is always a little hesitation, as though the paths we take are, at the least, unconventional, almost inexplicable.

Now to UK Music. Cometh the hour, cometh the woman… Jo joined as political advisor after meeting Feargal Sharkey, the CEO of newly created UK Music at a music reception, and took over as CEO in 2011. And boy, did we need her. Jo has an innate understanding of the power of political persuasion. With the industry in turmoil from the internet, the Rolls-Royce machine of the tech industry’s lobbying power flattening all before it, Jo stood up and made sure that the government was made completely, unequivocally aware of the power and value of the creative industries, with music right at its heart.

With the economic foundation of creation – copyright – under threat as an inconvenient truth that the tech industry wanted to sideline,Government was falling under the spell of weasel words conflating freedom of expression with content (invariably owned by someone else) and the Hargreaves Review followed. It was a potential disaster for the music industry, capable of stalling the nascent streaming services in their tracks, and our business also. It is hard to imagine what the industry might have done without Jo and UK Music. She rallied the troops and launched a Judicial Review of the proposed legislation to introduce an exception for copying – and won.

“Today, there is more respect for our industry within Government,” she says. “There is much more understanding.  You can’t argue the case for a sector unless you can speak the common language used by officials. For a complex sector like music, with often competing interests within the ecosystem, getting that language right, along with reports like Measuring Music, defined our place at the Whitehall policy table. “As in the 2005 Election campaign, economics tends to win the argument,” she adds. “This couldn’t be more important now with the shambolic management of our exit from the EU. It will be a tragedy for generations if the exit process continues to be so badly handled.”

We now know, in hard economic language, how much we contribute to the economy, quite apart from the amazing music we create. We have a Skills Academy, Measuring Music and Wish You Were Here, an annual report highlighting the value and power of our live music industry, and the Government is informed of our importance in a language that they understand.

Women In Music was a special day for Jo, when the industry could say, “Thank you for the work you’ve done”. Live Nation, where she’s now SVP, public affairs, is lucky to have her. Ever restless, honest, driven and passionate, I can only hope I don’t end up on the wrong side of an argument with Jo, as I am 100% certain she would win, as she has done so decisively for our industry.