Women In Music Roll Of Honour 2017: Suzanne Bull MBE, Attitude Is Everything 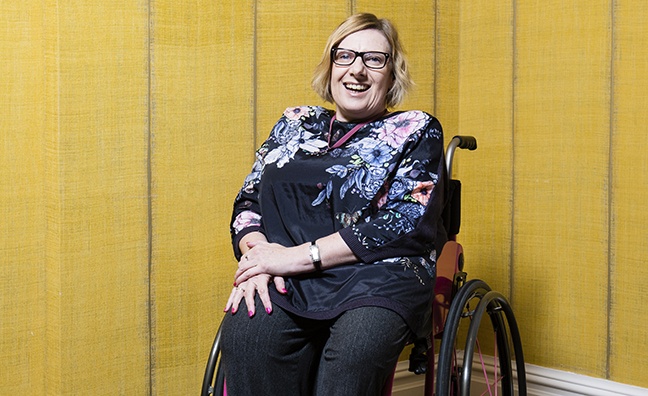 Every year, 12 industry game changers are inducted onto the Roll Of Honour at the Music Week Women In Music Awards, and this year’s list could be the strongest yet. Here, we meet the executives…

Suzanne Bull, CEO, Attitude is Everything

How do you feel about joining the Music Week Women in Music Roll Of Honour?

“I created my own job! I’m the CEO of Attitude Is Everything, which improves deaf and disabled people’s access to live music. I created it because myself and some other disabled friends of mine were playing in bands and having difficulties as audience members accessing venues and festivals. I wrote an article for a magazine and an Arts Council officer picked it up, rang me up and said, ‘Would you like some money to do a project for a year?’ So we went to disabled fans asking them what their issues were. We set about creating a set of guidelines for music venues and festivals to sign up to. That one-year pilot programme turned into its own charity in April 2008 and, 17 years later, here we are serving 165,000 disabled people going to 130 venues and festivals and spending £7.9 million.”

Did you have a mentor and/or role model who helped/inspired you in the early part of your career?

“I’ve had quite a few. I volunteered for a festival called Deptford Urban Free Festival. I had a great mentor there called Julian Rudd, who now runs Remarkable Productions. Another great mentor was Chris Tofu from Continental Drifts. I also worked for Artsline, and we had an amazing director called Roger Robinson, who taught me everything about welcoming people and treating staff properly and respectfully.”

“I’ve got an MBE, which I got from the Queen. It was a complete surprise. I’m just a working class girl from Essex that wasn’t given many life opportunities, and not expected to achieve that much. When you’ve achieved any award, if you think it’s entirely about you, you need to have a little word with yourself. Because really it’s about all the people that have helped you get to that point. So I accept it for the team, the board and the staff, because they do a massive amount of work and put their heart and soul into everything. It isn’t about me.”

Do you think there is parity of opportunity and remuneration for women in the UK music industry at the moment?

“No, but there isn’t in the charity sector either. It’s hard because I work on the fringes of the industry but in charities, everyone is poorly paid. But I don’t think women get enough opportunities. I do come across a certain type of man at a certain type of age that says a certain type of thing that I think, ‘Wow, you’re still saying that’.”

“There’s a few more people knocking about but there should be more. We need remuneration for everybody in certain sections and there needs to be parity of pay, for sure. There are very, very strong female artists in the music industry but I always think about the next set of people coming up. The opportunities I’ve had, where’s the next set of people going to get theirs from?”

“Do what you want to do. Actively listen to people but set your eye on the prize, don’t tread over anyone else to do it, and I’d say that to anyone, man or woman. Work with people, learn from people and actively listen to them. Take a lot of coaching and mentoring opportunities and try and have a vision for yourself and don’t let anyone put you off. If that’s what you really want to do, just do it.”