A big win for the biz? US execs cheer Biden's election victory 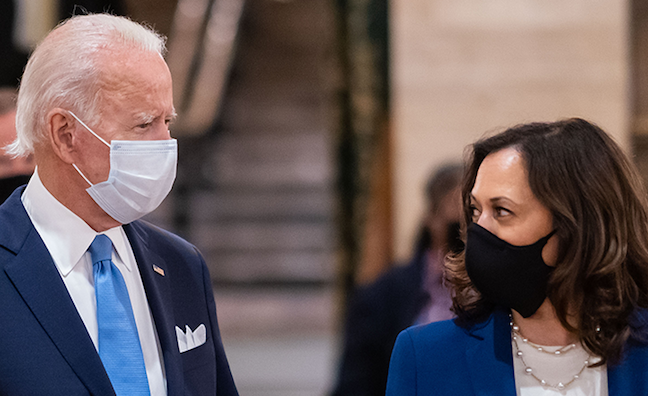 US execs have revealed their hopes for the incoming administration’s support for the music industry.

Four years ago, Glassnote CEO and founder Daniel Glass tipped newly-elected Senator Kamala Harris as the future of the Democratic Party. With the former attorney-general of California on her way to the White House as Vice-President-elect to President-elect Joe Biden, Glass admits that he shed a few tears on the day the election result was called.

For Glass, Harris has a CV that covers a wide range of music issues. Being from California, he believes that she gets the value of entertainment, the importance of tech companies and the overall need for culture.

“Arts will be back in the White House,” he predicted.

Jonathan Lamy, former chief spokesman for record labels’ body RIAA and founder/CEO of JLL Communications, has personal knowledge of Biden and believes that creators and creative industries will have champions at the White House.

“I can’t think of any President and Vice-President who will enter the office with as much collective familiarity with the policy and legal issues confronting the music business as Biden and Harris,” said Lamy.

For Richard James Burgess, president & CEO of indie labels’ body A2IM, it is too early for a full picture of Biden’s policies. But he points out that Biden “has more experience in copyright than any prior President” and “has always supported” a strong copyright regime.

David Israelite, president & CEO of the National Music Publishers’ Association (NMPA), noted that President-elect Biden “has a long track record of being a strong supporter of intellectual property rights.”

Several key issues will be on top of Biden’s agenda, starting with the Covid-19 situation. A Covid plan for the creative sector is “extremely” necessary and urgent, according to Burgess.

Changes in taxation policy are also planned, but many DC-based sources point out that with a slim majority in the House and a likely Republican Senate, they would need strong bi-partisan support.

“There will likely be a Republican-controlled Senate,” says one Washington, DC-based executive. “[But] on the stuff the administration can control – trade deals, relations with Europe, UK, etc – there’s lots of chance for significant change.”

For Neeta Ragoowansi, president of the Music Managers Forum-US, fair trade and global enforcement “are very important to creators and copyright owners”.

“We want to make sure that creativity continues to be protected and that this administration continues to push for national treatment protection for their artists,” she added.

The US elections have also resonated with many on this side of the pond, with PM Boris Johnson congratulating the President-elect as the UK is negotiating a trade agreement with the USA.

“With Brexit upon us, there’s a lot of uncertainty with the UK-US relationship,” said AIM CEO Paul Pacifico. “If we get a good trade deal with the US, this will give us leverage with the European Union.”

He added: “The result of the election was a huge relief for many people. I think everybody was exhausted [with Trump]. There is a sense that we can now have calmer, more rational discussions.”