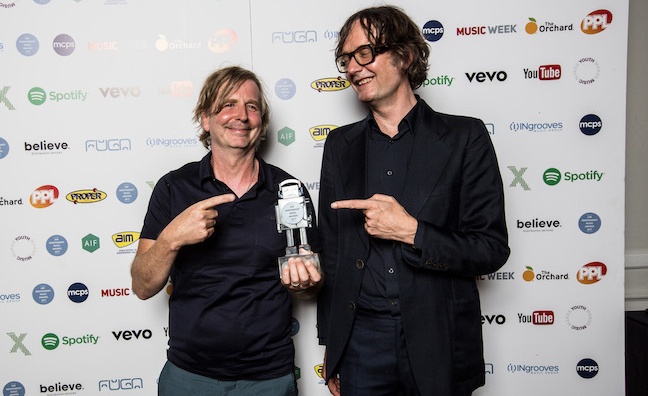 Jarvis Cocker was a special guest at the AIM Awards in London to support Sheffield cohort Steve Beckett, who received the Pioneer Award for his work at the Warp label. “Warp Records is the very embodiment of the indie spirit,” said Cocker, who’s long been a champion of the independent sector at AIM events as well as on his BBC 6 Music show. Music Week caught up with Cocker backstage to find out how Beckett rescued Pulp’s career in the early ‘90s…

“They had another label called Gift which was for more kind of – for want of a better word – indie type music. We were the first people to release music on that. There was a period just before we signed to Island Records where we were stuck in a kind of legal problem. Steve and Rob [Mitchell] helped us out by offering to let us release stuff on that. We did three singles with Warp, which then became an album called Intro, the first thing we released on Island.”

Was that important for Pulp to keep the momentum at that stage in 1992-93?

Totally, because it was just when the band was starting to get popular after I’d finished at college, so if we’d have been stuck and not been able to release anything for a year and a half we would have been screwed. So it really helped us a lot.

Why do you like to get involved with the AIM Awards?

Well more than ever, independent music’s important, you know. Because as far as I can see from doing stuff on my 6 Music show, the vast majority of interesting stuff is coming through independent labels. I think the independent sector is the one that’s showing the way to move forward, which is really just respect your audience and make things that they like. It’s real, and that’s important.

Will your relationship with Rough Trade continue for future releases?

Probably, yeah. I did a record with Chilly Gonzales, the pianist, this year on Deutsche Grammophon. I’m working on some more stuff at the moment. I’m just going to see what comes out. I don’t really like doing totally solo music. It’s more fun to make music with other people, you can have a surprise then.

You recently joined other artists to perform classic Scott Walker songs at the Proms. Did he appreciate the tribute?

Yes, he came to the Prom and he seemed to really enjoy having listened to it. I thought it was great that so many years later those songs could kind of get the respect and he was there to witness it.